Storm "Desmond", UK MetOffice's fourth named storm of the season, is bringing very heavy rain and severe winds to parts of Ireland and UK on Saturday, December 5, 2015. Ireland's Met Éireann has issued a status red weather warning alert for Connacht, Donegal, Clare and Kerry and status orange and yellow warnings are also in place across the country.

Met Éireann's head of forecasting Gerald Fleming said Storm "Desmond" would be a “once in several decades” event for many parts of the State, and that there could be “several weeks” of flooding ahead.

Weather experts are urging all residents on the west coast of Ireland to “take action” to protect themselves and their properties.

The storm has already left more than 3 000 homes without power and caused the cancelation of flights across Ireland.

According to the IrishTimes, western parts of Ireland have been hit the hardest which prompted Met Éireann to issue a rare status red national weather warning, the highest and most severe on the forecaster’s scale.

"Met Éireann is forecasting incessant falls of heavy rain for all of Saturday with accumulations in excess of 70 mm (2.75 inches) expected in some areas, with greater totals on higher ground. Localized flooding has been reported in parts of Galway, Mayo, Kerry and Donegal and Met Éireann has warned that prolonged heavy rain in the west and north west is likely to cause further flooding.

Some rivers in the west have burst their banks, while gardaí say three empty cars were crushed after a tree fell on them in a car park in Rathfarnham," the IrishTimes reports. 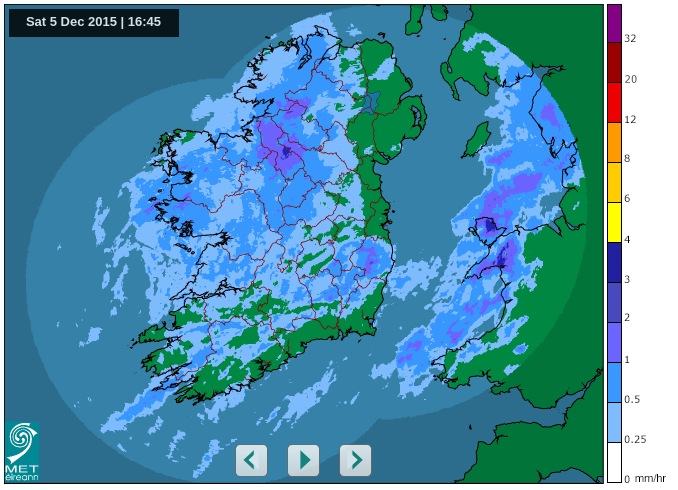 Meteorologist Pat Clarke of the "Met Éireann said: “It’s pretty nasty. The heaviest of the rain, as expected, is in Connacht, Donegal and west Munster – the Atlantic seaboard counties plus the inland counties of Connacht, and the heaviest of all the rainfall has been in Galway, Mayo and Donegal in the northwest and west.”

“The good news is that all this rain, all this wind that we have will clear away overnight. Sunday will be a much clearer day, big improvement weather-wise, a lot of dry weather and some sunshine,” Clarke said. 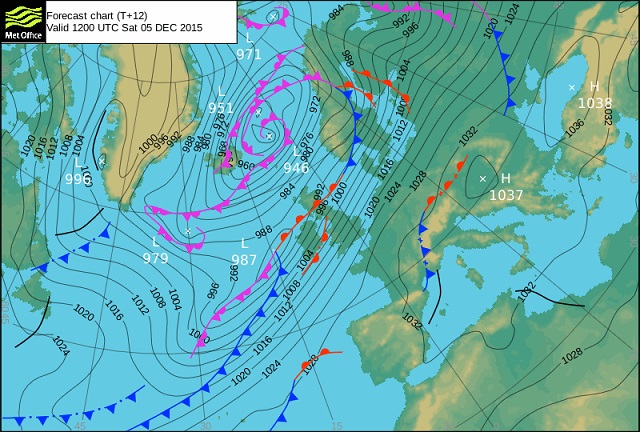 According to the UK MetOffice, the heaviest rain is expected on west facing hills and mountains from north Wales northwards and a Red 'take action' warning for rain is now in force for parts of Cumbria. Rainfall totals of 150 to 200 mm (5.90 – 7.87 inches) are expected in places today, especially over exposed mountains. In addition significant impacts are likely across a broad area of northern England, western Scotland and Northern Ireland.

An Amber 'be prepared' warning for wind is in place for parts of  the SE of Scotland and NE of England, parts of the Pennines with gusts of 113 – 129 km/h (70 – 80 mph) likely this afternoon and evening.

The wind and rain are expected to peak this afternoon and evening, however flood impacts will continue though the evening and night as water flows into the river system and out to sea.

.@SkyNewsNaz has the latest on #StormDesmond as it whips in to the UK and Ireland bringing strong winds and floods https://t.co/p0CTO5n8cd

The UK Environment Agency has severe flood warnings in place for parts of the River Tyne in Northumberland and across Cumbria. They are warning residents in Carlisle to prepare for very high river levels. They also warn that significant flooding is likely from rivers and surface water across parts of Lancashire, the West Pennines and the Cheviot Hills, while the River Ouse in Yorkshire is continuing to rise, with levels likely to be raised until Tuesday, December 8.

During the afternoon of December 5, the Cumbria Police and partner agencies have declared the severe weather across Cumbria a major incident. "All partner agencies are working closely together to try and resolve the issue and keep the public of Cumbria safe. All agencies are utilising their specialist skills in the face of very challenging weather conditions. Many of Cumbria’s roads are blocked or impassable due to flooding and widespread surface water. In particular roads around Keswick and Kendal are blocked and we advise people not to travel in or out of those areas."

Marc Becker, Scottish Environment Protection Agency's Hydrology Duty Manager, said: "Heavy rain will continue to affect much of Scotland throughout the rest of Saturday. Rivers rose significantly overnight and they will continue to rise and remain very high throughout today. There has already been significant transport disruption, including on some main roads and rail links and some property flooding across areas of central and southern Scotland."

The last time UK MetOffice issued a red warning was on February 12, 2014 for severe gales  across Wales and northern England. Maximum recorded gust speeds included 174 km/h (108 mph) at Aberdaron, Gwynedd, 154 km/h (96 mph) at Lake Vyrnwy (Powys) and 140 km/h (93 mph) at Capel Curig (Gwynedd) – close to record values. The highest gust speed on record for North Wales is 180 km/h (112 mph) at Aberdaron on December 24, 1997. This was one of the most significant storms to affect Wales and north-west England in recent decades.

Forecasters expect the weather system will clear southwards during the early hours of Sunday leaving less windy, calmer, colder, showery weather for Scotland and Northern Ireland. These showers could be wintry on hills, mainly above 300 m (984 feet).