A new research, conducted by scientists of NASA's Jet Propulsion Laboratory in Pasadena, California, suggests that Earth is surrounded by long, 'hairy' filaments of dark matter. Theoretically, the hairy filaments, if detected could be used to map out the inner layers of any planet or space bodies, NASA announced on November 23, 2015.

Dark matter, is believed to be an invisible substance making up approximately 27% of all matter and energy of the universe. Regular matter, or 'visible' builds up only 5% of the universe. According to experts, the rest of the universe building blocks is made of dark energy which is associated with acceleration of our expanding universe.

So far, no experiments have been able to detect dark matter or dark energy, however scientist are confident in its existence, based on observations of its gravitational pull in action, and they have also been able to measure how much of it is our there to the accuracy of 1%. 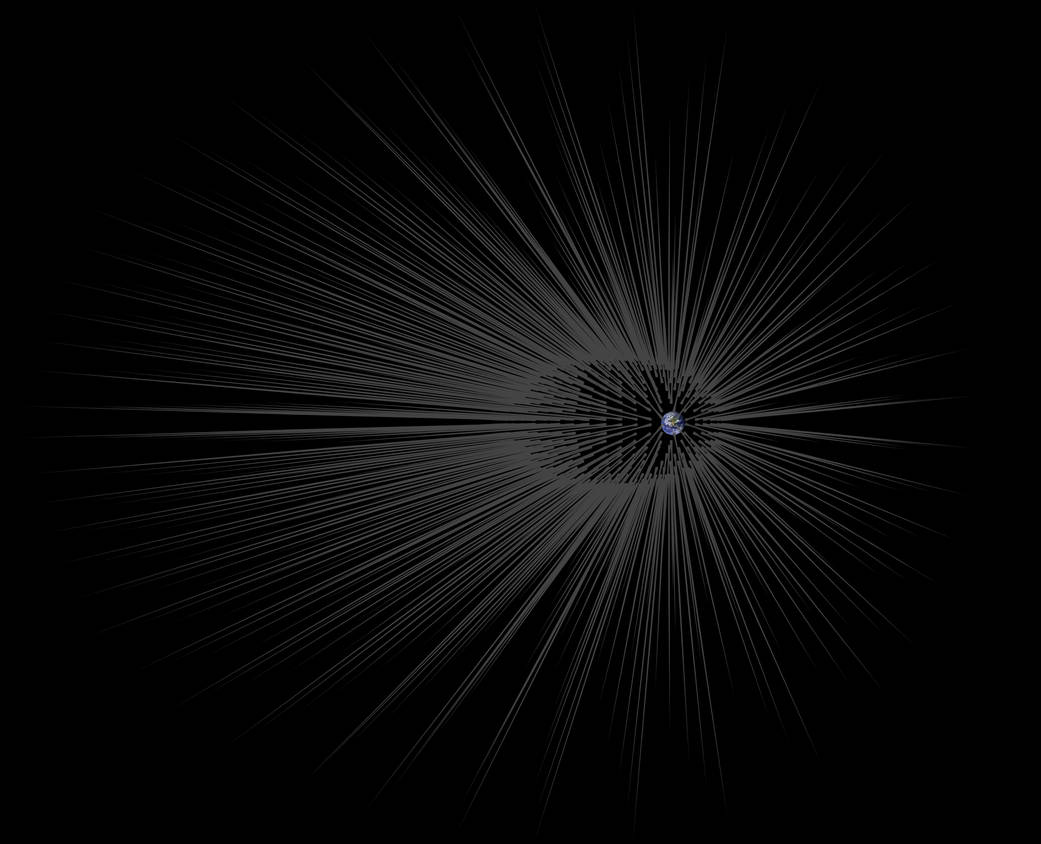 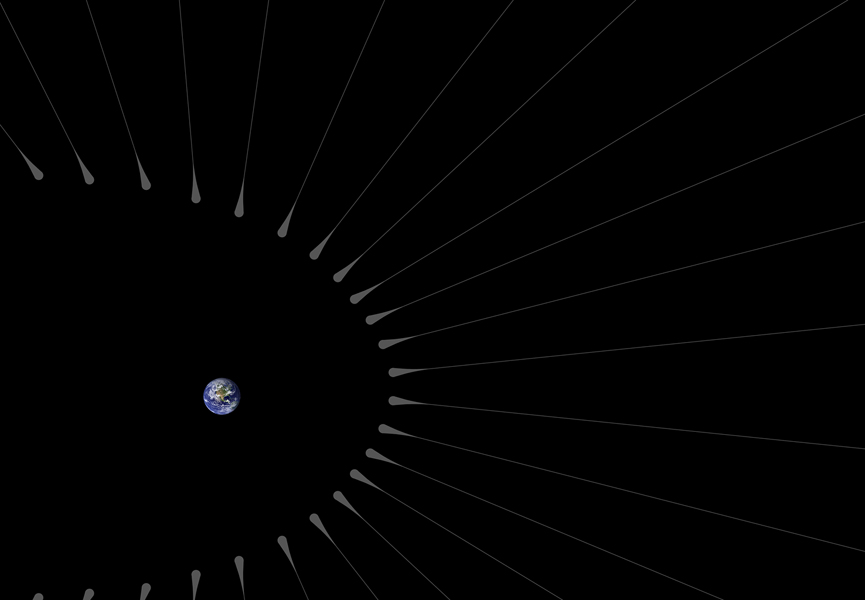 This artist's rendering zooms in on what dark matter "hairs" might look like around Earth. Image credit: NASA/JPL-Caltech

Dark matter is thought to be "cold", which means it doesn't move around much and makes no interaction with light. Fluctuations in its density are likely responsible for the formation of galaxies, while gravity acts to keep the ordinary and dark matter together. This dark substance forms "fine-grained streams" of particles, moving at the same velocity and orbits galaxies such as ours.

"A stream can be much larger than the solar system itself, and there are many different streams crisscrossing our galactic neighborhood," Gary Prézeau, lead researcher said, adding "When gravity interacts with the cold dark matter gas during galaxy formation, all particles within a stream continue traveling at the same velocity."

When a stream of dark matter particles approach a planet they form and ultra-dens filament, a 'hair' of dark matter. If calculations predicting this phenomena are correct, there could be many hairs coming out of our Earth.

A stream of ordinary matter is not capable of going through out planet and out again on the other side, however, things are different when observed from a perspective of dark matter. According to computer simulation results, Earth's gravity would focus and bend the stream of dark matter particles into a narrow, dense hair.

When particles of a dark matter stream pass through Earth’s core, they become focused at the "root" of a hair, where the particle density becomes about a billion times higher than average. The root of such a hair would be located 1 million kilometer (600 000 miles) away from the surface, or twice as far as the moon. The stream particles that graze Earth's surface will form the tip of the hair, about twice as far from Earth as the hair’s root.

"If we could pinpoint the location of the root of these hairs, we could potentially send a probe there and get a bonanza of data about dark matter," Prézeau said. 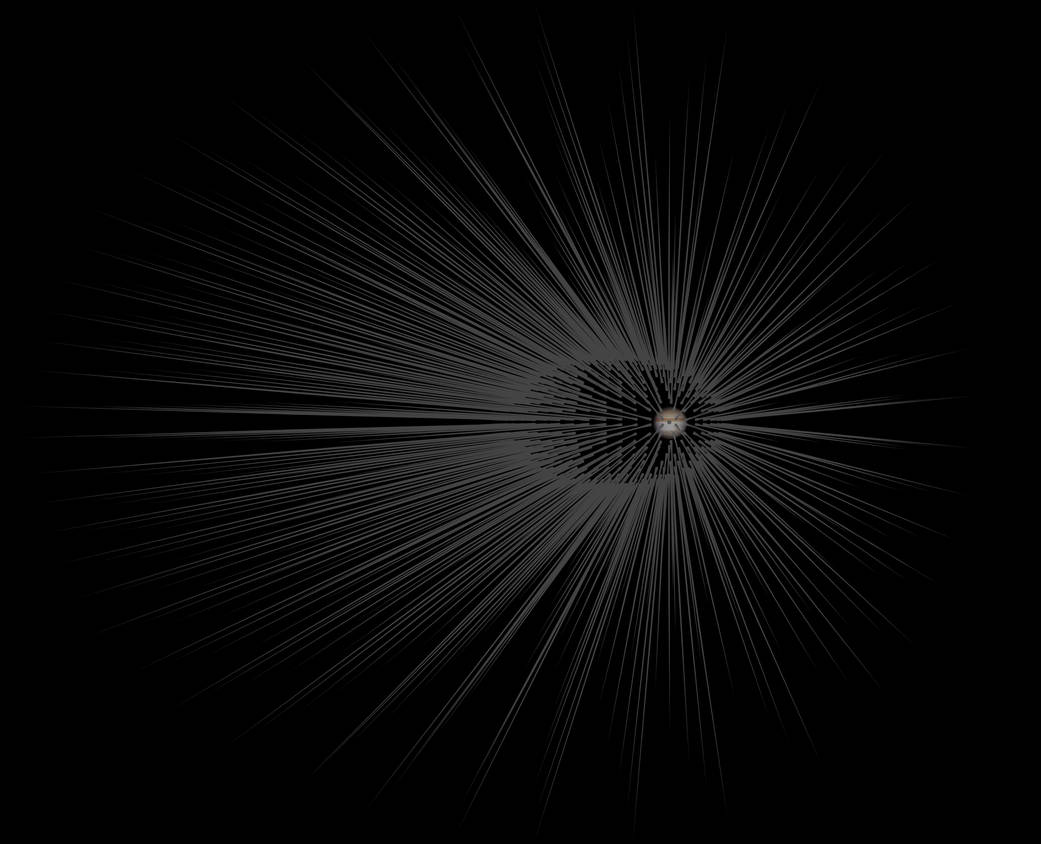 The root of a dark matter hair produced from particles going through Jupiter's core would be about 1 trillion times denser than average. Image credit: NASA/JPL Caltech

If such presumptions are valid, a core of a larger planet, such as Jupiter would probably produce almost 1 trillion times denser roots than the original stream.

"Dark matter has eluded all attempts at direct detection for over 30 years. The roots of dark matter hairs would be an attractive place to look, given how dense they are thought to be,” said Charles Lawrence, chief scientist for JPL’s astronomy, physics and technology directorate.

A discovery like this would be amazing in one more aspect, as it turns out all the changes in density within the planet, from its inner core, to the outer core, the mantle and the crust would be reflected in the hairs. The hairs would have kinks in them which would correspond to the transitions between the different layers of the planet.

Information contained in these hairs could be used to map the layers of any planetary body, and perhaps infer the depths of the oceans in icy moons.