Astrosat carried multiple modules from which The Charged Particle Monitor (CPM) was the first to go online followed by the Cadmium Zinc Telluride Imager (CZTI) which became operational on October 5, 2015. Astrosat was then positioned towards the Crab Nebula, the brightest source of hard X-rays in the sky, often used to calibrate detectors, on October 6, 2015.

Cadmium Zinc Telluride Imager (CZTI) is made up of four quadrants of 16 pixelated detectors each and is sensitive to X-rays above 10 keV energy. The CZTI is extremely sensitive and for every photon it detects, sends event report consisting of position (pixel number, each pixel – 2.5mm X 2.5mm), time of detection (correct to 20 micro-seconds) and energy of the incident photon.

The first attempt to observe the Crab Nebula from the Astrosat failed. This was probably because the satellite happened to pass through the South Atlantic Anomaly (SAA) region  when Crab was in the field of view. Another possibility was an error in the data pruning process.

During the second attempt on October 9, 2015, the South Atlantic Anomaly (SAA) avoidance zone was deliberately kept wide to keep the instruments safe and the Crab Nebula was simultaneously observed by the Mission Operation Centre at Peenya, Bengaluru, and Payload Operation Centre, IUCAA, Pune. 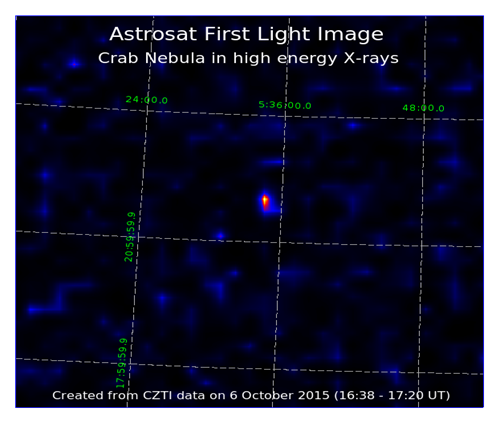 Image of Crab Nebula in hard X-rays above 25 keV. The bright spot near the centre indicates Crab. The effective imaging resolution here is about 10 arcmin. The faint patches outside are `side-lobes’ of the imaging process and they will be suppressed significantly when data from all quadrants are analyzed simultaneously, which will also improve the image resolution to better than 8 arcmin. Image credit: ISRO

The Crab Nebula was looked at continuously from different angles to reinforce the imaging ability of the CZTI module. The black hole source Cygnus X-1 was also observed for two days. The Astrolab CZTI detector was then used to make simultaneous observations with NASA's Swift satellite. The following observations were made:

The CZTI also made a simultaneous observation of the Cygnus X-1 black hole source with NASA's NuSTAR satellite on October 7 at 15:40:08 UTC to October 8 02:25:00 UTC. Moreover, ESA's Integral satellite is currently viewing the Crab Nebula simultaneously with CZTI and a refined polarization measurement of the Crab Nebula is expected in the near future.

In a month, all X-ray instruments (CZTI, LAXPC and SXT) aboard Astrosat will be online and will be used to observe interesting stars. In November, Astrosat will look at black hole sources like GRS 1915+105, Cygnus X-1, Cygnus X-3 etc.

Simultaneous observations of the above mentioned sights are also expected with an Infra-red telescope at Mt Abu, radio observations at GMRT, Khodad (near Pune) and using the Himalayan Chandra Telescope, located at Hanle, Ladakh, for science analysis of CZTI.