NOAA's meteorologists predict this season's El Niño will have a significant impact on the 2015/2016 US winter by influencing the positions of the Pacific jet stream. In combination with cold air outbreaks from Arctic Oscillation and snow storms usual for this time of the year, the winter ahead will probably be wetter than average in some parts of the country, while drier than usual elsewhere across the states.

According to the report, cooler and wetter weather is expected in Southern Tier states with above-average temperatures in the West and the Northern Tier.

This year's El Niño, currently among the strongest on record, is expected to peak during late northern hemisphere autumn or early winter with seasonal average sea surface temperature anomalies locally exceeding +2 °C. Although El Niño is not the only significant event influencing the US weather, it is still expected to make a significant impact over the coming months by directly influencing the position of the Pacific jet stream.

“A strong El Niño is in place and should exert a strong influence over our weather this winter. While temperature and precipitation impacts associated with El Niño are favored, El Niño is not the only player. Cold-air outbreaks and snow storms will likely occur at times this winter. However, the frequency, number and intensity of these events cannot be predicted on a seasonal timescale,” said Mike Halpert, deputy director, NOAA’s Climate Prediction Center.

Other significant weather factors include the Arctic Oscillation which is responsible for the arctic air masses penetrating into the South and nor'easters on the East Coast, and the Madden-Julian Oscillation which can influence the number of heavy rain storms occurring across the Pacific Northwest. 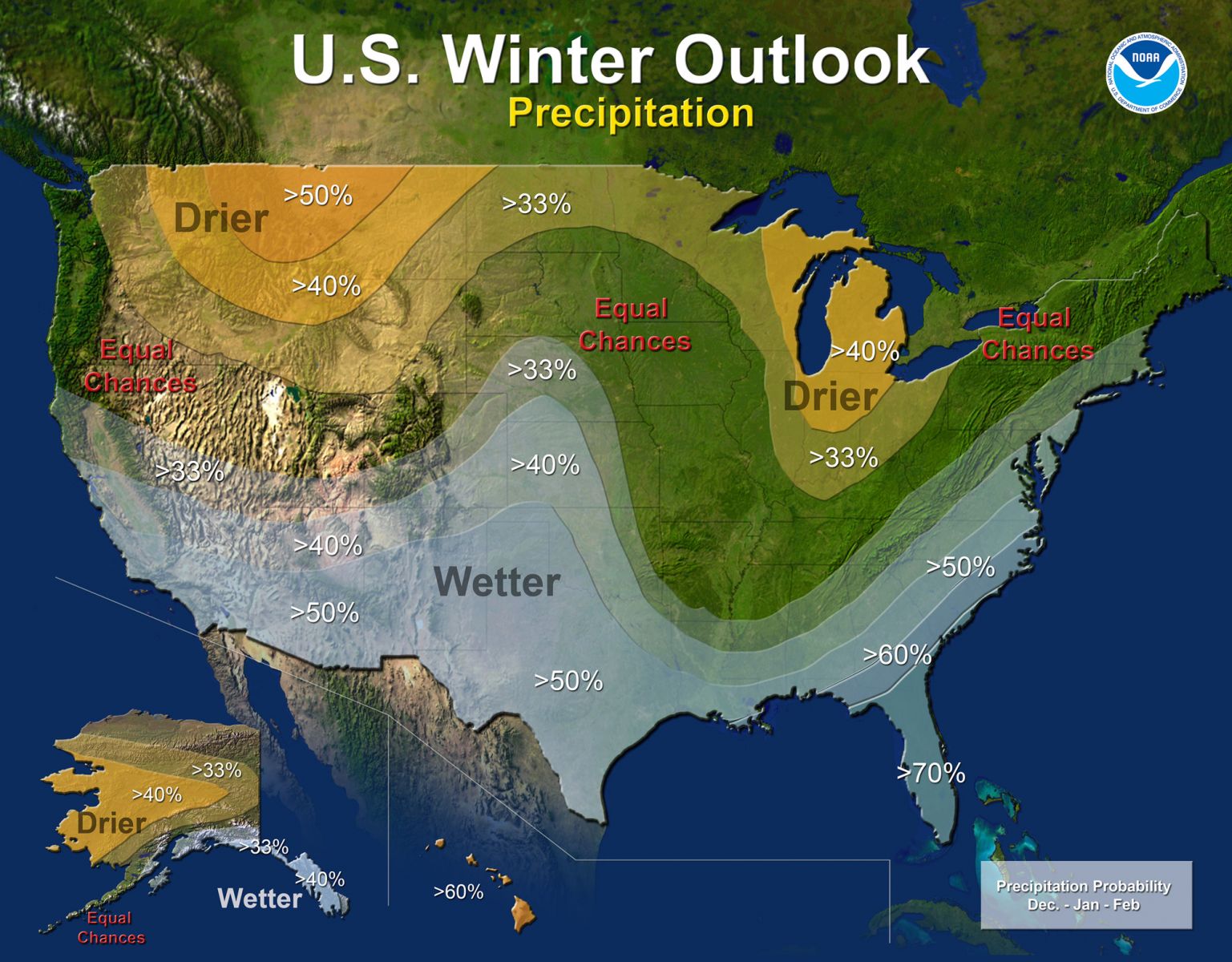 In a period between December 2015 and February 2016, the forecasters predict wetter than average conditions across the Southern Tier, from central and southern California, across Texas to Florida, and up the East Coast to southern New England and southeastern Alaska.

On the other hand, drier than usual weather will probably occur across Hawai'i, central and western Alaska, parts of the Pacific Northwest, northern Rockies and areas near the Great Lakes and Ohio Valley.

Most of the West, the northern half of the contiguous US, Alaska and Hawai'i will experience higher than usual temperatures while below average ones will most likely occur in the southern Plains and Southeast. 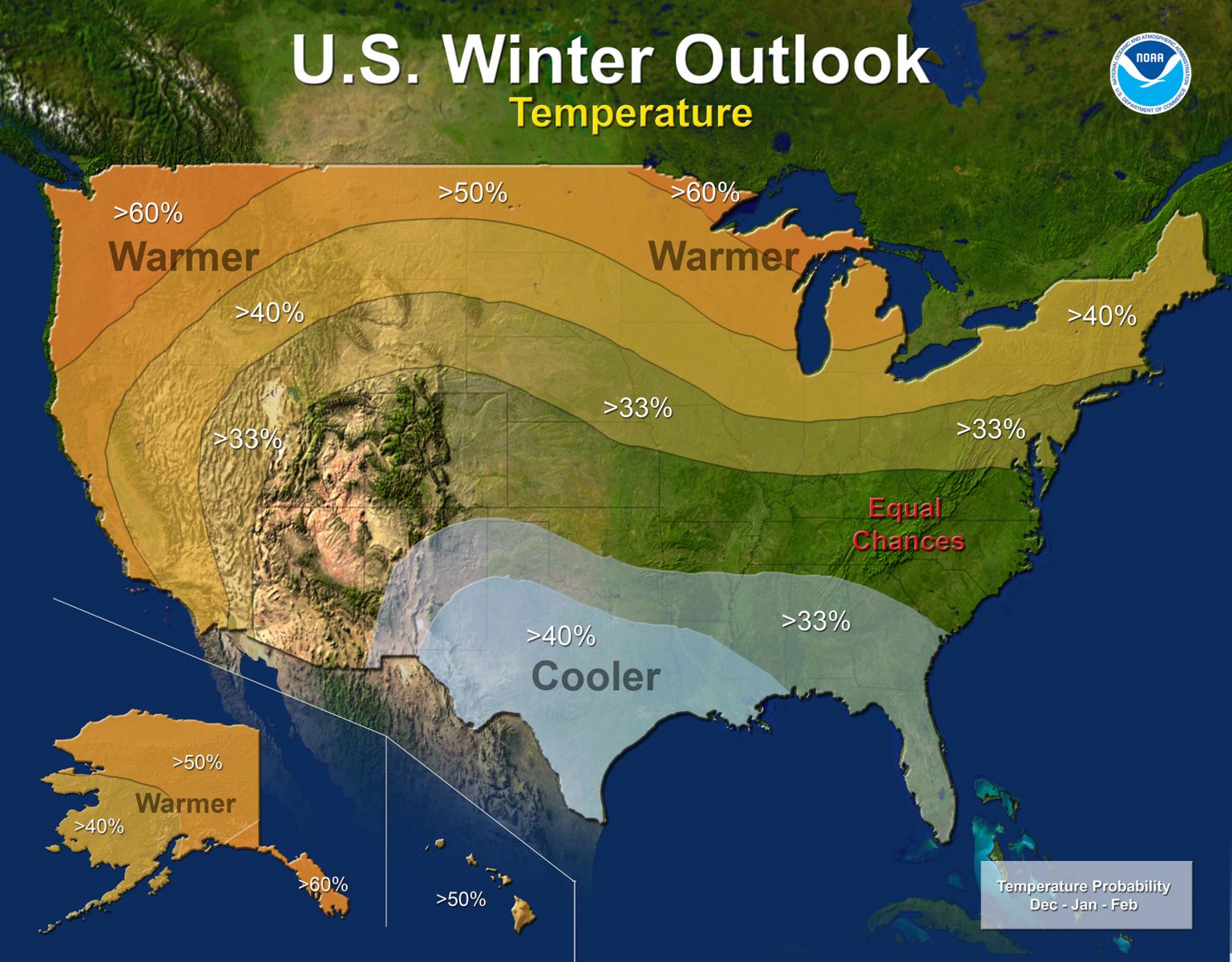 Drought conditions in strongly affected central and southern California will most probably improve by the end of January 2016, while additional relief is expected during February and March. Large parts of the Southwest will most likely be entirely drought-free, while improval is forecast for the southern Plains.

Unfortunately, drought conditions are forecast to persist across the Pacific Northwest and northern Rockies, while they are most likely to develop in Hawai'i, parts of the northern Plains and in the region of the northern Great Lakes. 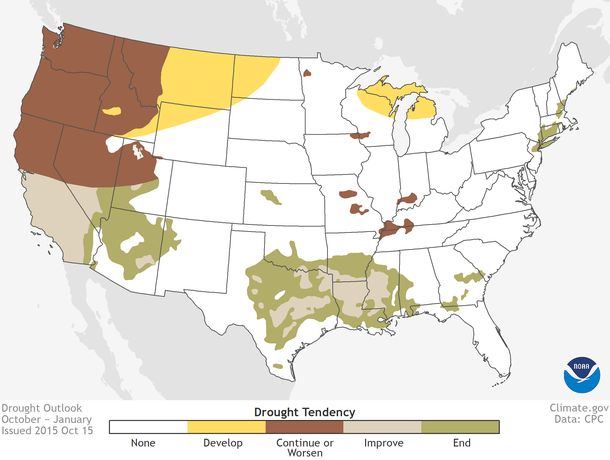 "While it is good news that drought improvement is predicted for California, one season of above-average rain and snow is unlikely to remove four years of drought. California would need close to twice its normal rainfall to get out of drought and that's unlikely,” explained Halpert.

"This seasonal outlook does not forecast where and when snowstorms may hit or provide total seasonal snowfall accumulations. Snow forecasts are dependent upon the strength and track of winter storms, which are generally not predictable more than a week in advance," NOAA's report adds.