The Mad River complex is a series of seven lightning fires that started on July 30, 2015 after a lightning storm moved through Northern California. After initial firefighters responded, 25 fires were reported and most of the fires were contained. Some additional fires might be detected from the original lightning storms in the upcoming days and will be attacked once they are found. Damage assessment is ongoing and crews will determine the extent of structures and equipment damaged or destroyed.

The River Complex is managing a total of 5 fires due to fires merging together on the Shasta-Trinity and the Six Rivers National Forests. Winds from the west are expected to lift the inversion today resulting in active fire behavior.

The Fork Complex consists of over 40 fires, all of which were ignited by lightning between July 29 and 31, 2015.  These fires are still being identified, assessed, and prioritized. Updated acreage and information about specific fires will be published as it is known. Fire activity moderated throughout last night (8/4) with the smoke inversion layer remaining in place today. Hopefully this will create favorable conditions for fire crews to take direct fire attack on the fires edge, construct dozer line and scout for best firefighting locations on all fires in the complex.

The South Complex consists of approximately nine known fires, five of which are currently over 100 acres. The fires are active and defense of structures and point protection are in progress. The weather is trapping smoke in the valley causing very poor air quality. As the smoke lifts the fire activity increases. Firefighters will continue to provide point protection on structures and to look for opportunities to build direct and indirect containment lines.

The Route Complex currently stands at 12 164 acres from seven separate fires and is at 2% containment. The overall acreage has been reduced because the South Fire on the nearby South Complex is merging with the Johnson Fire in the Route Complex resulting in decreased and revised fire perimeter acreage.

This natural-color satellite image collected by the Moderate Resolution Imaging Spectroradiometer (MODIS) aboard the Terra satellite shows smoke rising and drifting northwest from the various fire complexes.  It was captured on August 04, 2015. Actively burning areas, detected by MODIS’s thermal bands, are outlined in red. 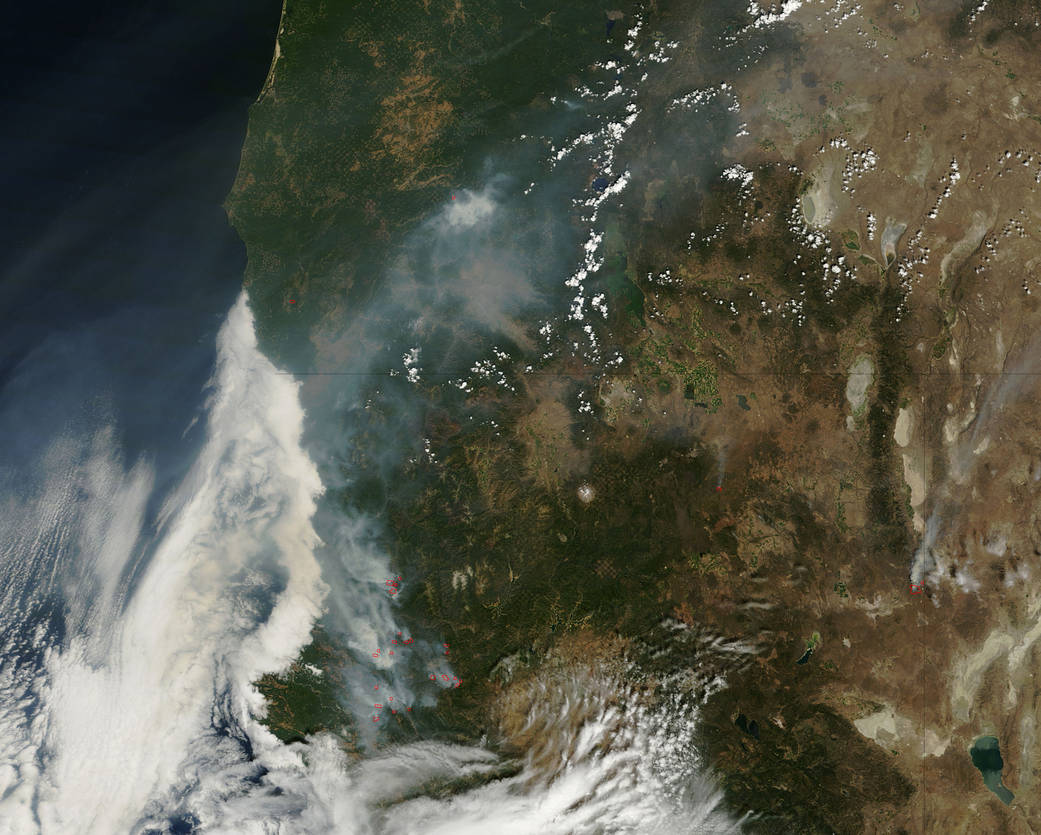 Written by Lynn Jenner (NASA/Goddard) with information from Inciweb.org