If you have ever visited a cave and taken photos, you might have noticed that the colours in the photographs appear more vivid than when you were in the cave. This is because organic matter trapped in the stalagmites and stalactites fluoresces.

The light emitted by your camera flash is enough to make these formations fluoresce, and this is what you see in your photos.

For the last 24 years one of us (Andy) has been investigating such stalagmites from a cave in remote northwest Scotland.

In recent research published in Scientific Reports, we’ve shown that these stalagmites preserve a history of past climate. They show that there’s a correlation between periods of wet and dry and human migration, such as the Viking Age.

Here’s how we did it.

The fluorescent organic matter trapped within the calcite of cave deposits such as stalagmites comes from the soil above the cave. Movement of rainwater from the surface downwards through the soil then the limestone and into the cave, transports this organic matter.

Depending on the surface climate, this transport of fluorescent organic matter is highly seasonal, and in some cases produces annual fluorescent layering that is preserved in stalagmites. 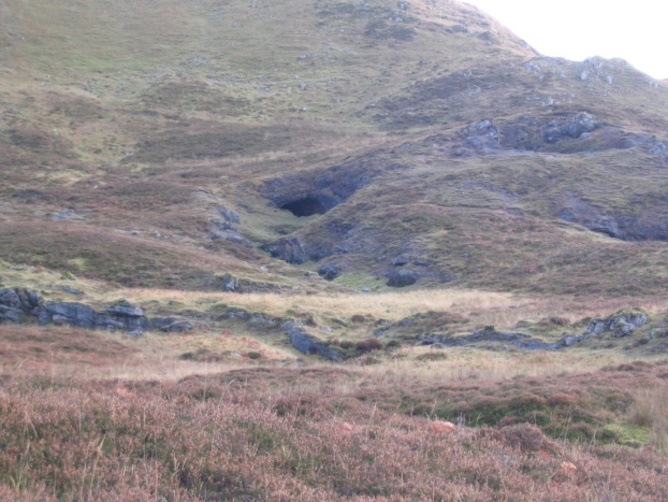 Uamh an Tartair, northwest Scotland. The mostly obscured cave entrance at the far left contains the waterfall, and is one of several entrances. The part of the cave from where the stalagmites were studied is above and to the left of the visible entrance in the centre of the picture.

The cave Andy has been studying in Scotland is called Uamh an Tartair (Gaelic for “Cave of the Roaring” due to the noise of a waterfall) has all the ideal characteristics for the preservation of annual fluorescent layers in stalagmites. It has an ample supply of organic matter from an overlying bog.

The cave is relatively close to the surface, which means that rainwater is not completely mixed with older water in the limestone.

Finally, there is a strong seasonality of climate, with cold winters and short, relatively warm summer growing seasons.

Over many years, members of the research team counted the annual fluorescence layers in multiple stalagmites. Counting these layers provides a way of building a timeline of past climatic conditions, rather similar to the way tree rings are used in the field of dendrochronology.

As with tree rings, we can also measure the distance between each band (fluorescent layer), which is the amount of stalagmite growth in that year. Continuous sequences of growth banding can be compiled, and their age can be determined using radiometric methods (the decay of naturally present uranium to thorium).

Once you have several stalagmites with both a timeline or chronology, and an annual layer thickness or growth rate, techniques can be developed to produce a timeline of stalagmite growth rate.

We have achieved this goal using five stalagmites with overlapping timelines from Uamh an Tartair to produce a record of annual stalagmite growth rate for the last 3,000 years.

Why did we go to all the effort of counting thousands of years of annual stalagmite growth rate?

We did this because we knew that northwest Scotland’s rainfall correlates strongly with a regional climate phenomenon called the North Atlantic Oscillation, or NAO. 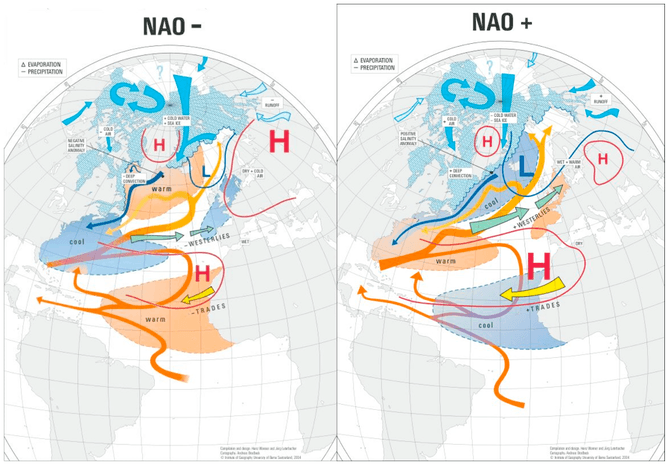 Numerous studies have shown there is a relationship between the NAO and wildlife, such as the timing of egg laying and migration of bird species, the recruitment levels of fish, and the survival and breeding patterns of mammals such as deer and sheep.

The NAO also affects modern-day life, as experienced in the United Kingdom in recent years, where a negative NAO has led to cold and snowy winters.

At Uamh an Tartair, we have demonstrated that the annual growth rate of the stalagmites has a strong correlation with the NAO.

When the NAO is positive, it is wetter in northwest Scotland, including the cave site. This means that the bog remains saturated with water for longer in the year, and there is less time for soil microbes to respire the carbon dioxide needed to dissolve the limestone and form stalagmites.

In these circumstances the growth rate is relatively slow. The opposite occurs when the NAO is negative, with a relatively fast annual growth rate. This correlation has allowed us to produce a proxy record of the winter NAO for the last 3000 years.

Our 3,000-year record shows that the NAO remains “stuck” in either positive or negative modes, and that this can last for several centuries.

For example, a period where the NAO was predominantly in a positive mode occurred from about 900 CE to 1400 CE, a period called the Medieval Climate Anomaly (MCA). Another period of persistently positive NAO occurred before this, from 290 to 550 CE.

These periods coincide with the European Medieval and European Migration Periods, and therefore provide a climate context for this phase of European history. A positive NAO would mean a wetter northwest Europe, with fewer cold and snowy winters, but relatively dry winters in southwest Europe. 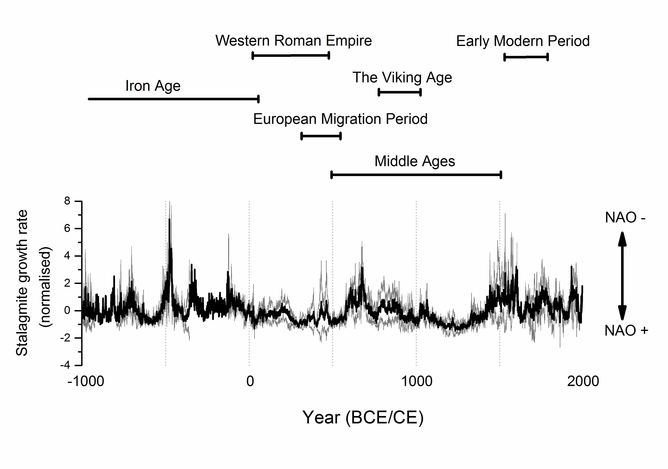 The 3000 year record of the NAO compared to western European historical periods.

A period of sustained fast stalagmite growth-rate, indicative of a negative NAO, occurred from 600-900 AD. Colder, drier winters with a weaker westerly wind in northwest Europe were more likely during this period, which coincides with the Viking Age.

A question for historical research is whether these persistent NAO states were important enough to have an influence on human culture and civilisation in Europe at those times.

Finally, it can be seen that our record of NAO variability is not affected in recent decades by global warming. This is to be expected, as the NAO is driven by the westerly circulation and the jet stream, both of which are primary atmospheric processes that influence the Earth’s climate.

Recent studies using climate models suggest that even the most catastrophic effects of global warming, such as major melting of the Greenland ice sheet, will not have a major effect on the NAO.

The natural variability of the NAO, and associated climate and ecological effects, are phenomena that we will continue to experience throughout this period of anthropogenic global warming.

This article was originally published on The Conversation.