Beginning at about 07:40 UTC on April 29, 2015, the Overlook crater lava lake overflowed its rim on several occasions, sending short, lobate sheets of pāhoehoe as far as 130 m (142 yds) across the floor of Halemaʻumaʻu Crater, HVO reported in their information statement issued 03:40 UTC today.

These overflows were captured on USGS-HVO’s web cameras. Thus far, the flows have been brief and their forward motion ceased as the lava lake level fell and lava subsided into the Overlook crater. As yet, no change in lava spattering or surface circulation patterns on the lake in response to these overflows has been noted.

Given the sustained high, and slowly rising, levels of lava within the vent during the past week, these overflows were expected and they are likely to continue intermittently. During similar lava lake activity at Halemaʻumaʻu in the 1800s and early 1900s, lava lakes frequently produced overflows. Over time, overflows and intermittent spattering can build a collar of solidified lava that then contains the rising and circulating lava lake. This phenomenon is known as a ‘perched lava lake.’ 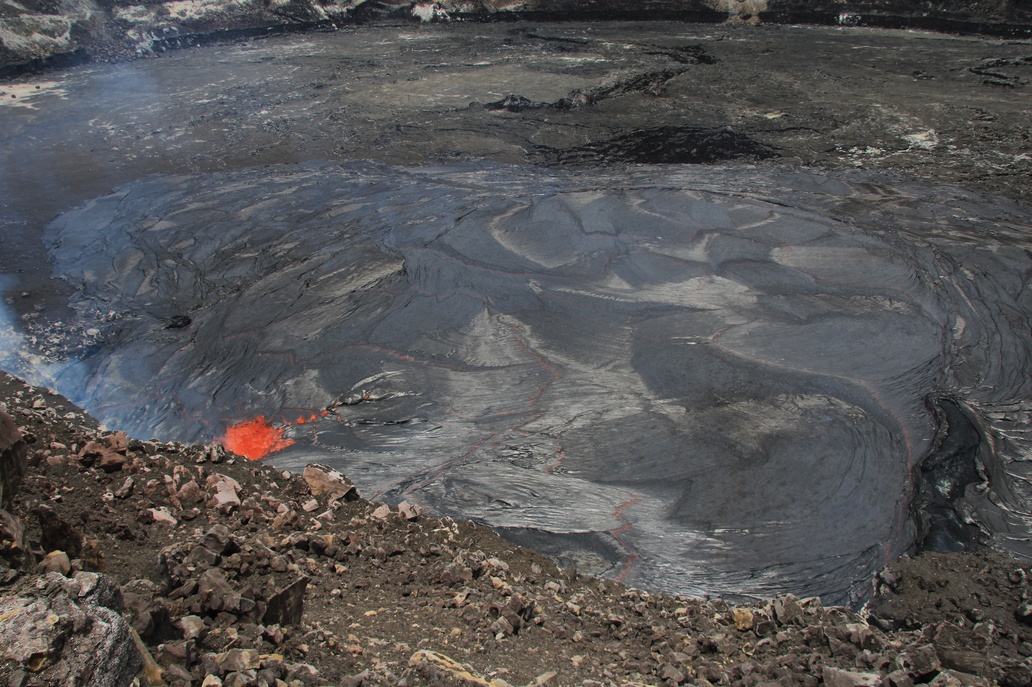 Photo from the rim of Halemaʻumaʻu showing the lava lake in the completely filled Overlook crater on April 29, 2015. Repeated overflows are beginning to construct levees around the lake, such that the level of the lake is now perched about 2 m (7 ft) above the original floor of Halemaʻumaʻu. Image credit: USGS/HVO.

Rockfalls, explosions, and spatter on the Halema'uma'u crater rim; ashfall at Jaggar overlook and beyond

At about 20:20 UTC on April 28, a rockfall from the southeast wall of Halemaʻumaʻu Crater above the lava lake initiated an explosion from the lake surface. Large clots of molten spatter up to 2 meters (2 yards) across showered the rim of Halemaʻumaʻu in the vicinity of the closed visitor overlook fence. The hot spatter formed a nearly continuous blanket for about 100 m (110 yards) along the crater rim and extended back from the rim about 50 m (55 yards). Small bits of crater-wall rock were embedded in the spatter clots. Additional explosions and showers of rock and spatter can be expected. They can occur suddenly and without warning and underscore the exceedingly hazardous nature of the Halema‘uma‘u Crater rim, an area that has been closed to the public since late 2007. 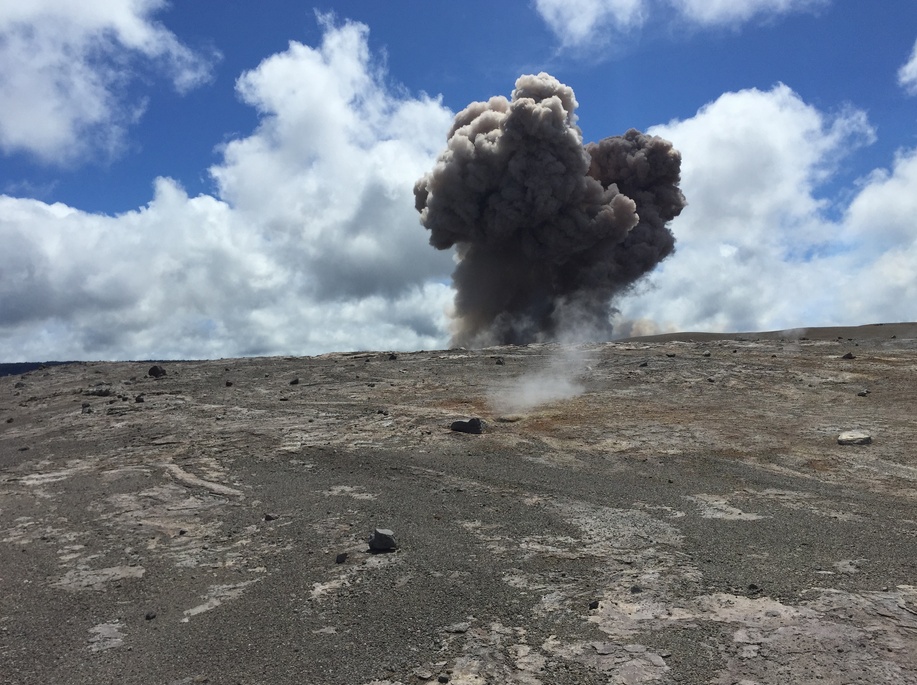 A rockfall from the wall of Halemaʻumaʻu Crater impacted the lava lake around 10:20 am (local time, April 28, 2015), triggering an explosion of spatter and smaller particles. HVO geologists working on the far side of the crater captured the initial moments of the plume rising. The explosion deposited a large amount of spatter around the closed Halemaʻumaʻu visitor overlook. Image credit: USGS/HVO.

Visitors to the Hawai‘i Volcanoes National Park Jaggar Museum Overlook and other Park areas should also note that under southerly wind conditions, similar rockfalls and explosions can result in a dusting of powdery to gritty ash composed of volcanic glass and rock fragments. Several such ashfalls occurred last weekend and, although they represent a very minor hazard at this time, people should be aware that additional dustings of ash are likely at Jaggar Museum and other areas around the Kīlauea summit. For more information about volcanic ash hazards and precautions at Kīlauea, please see: http://hvo.wr.usgs.gov/hazards/FAQ_SO2-Vog-Ash/main.html

For the past week or so, HVO monitoring networks have recorded steady inflation of the Kīlauea Volcano summit area. Shallow earthquake activity has also been elevated beneath the summit caldera, upper East Rift Zone, and upper Southwest Rift Zone. Of the hundreds of earthquakes that have occurred in the past week, most have been small, less than magnitude-2 (M2). However, on the morning of April 29 (local time, -10 UTC) a M3.0 earthquake occurred at the easternmost caldera boundary. It is the second M3+ earthquake in this region during this sequence.

During this period of elevated summit activity, there has been no obvious change in the eruption rate of lava from Puʻu ʻŌʻō. Rates of gas emission from both the summit and Puʻu ʻŌʻō remain largely unchanged. Short-lived increases in sulfur dioxide from the summit lava lake have been noted during rockfall-triggered explosive events, such as the one that occurred yesterday morning.

What we can expect

The current activity is best explained by an increase in magma supply to the Kīlauea Volcano magma reservoir or storage system, something that has occurred many times during the ongoing East Rift Zone eruption. Increased supply and shallow storage can explain the higher magma column in the Overlook crater, as well as the continuing inflation and elevated earthquake activity in the summit region. Higher volumes of magma moving throughout the summit and upper East Rift Zone pressurizes the reservoir and magma transport system and causes small earthquakes and inflationary tilt.

As long as magma supply is elevated, we expect continued high lava lake levels accompanied by additional overflows. Lava from these overflows could cover more of the Halemaʻumaʻu Crater floor, form a perched lake, or result in some combination of these two processes. Spattering or lava fountaining sources can migrate across the surface of the lava lake, as recently observed. We expect continued rockfalls, intermittent explosions and ash fall, and continued high levels of gas release.

The evolution of unrest in the upper East Rift Zone is less certain. It is possible that a surge of lava will reach Puʻu ʻŌʻō and lava flow output will increase, both on the flanks and within the crater of Puʻu ʻŌʻō. It is also possible that lava will form a new vent at the surface. If this happens, it will most likely occur along a portion of the East Rift Zone between Pauahi Crater and Puʻu ʻŌʻō. Other outbreaks in the summit area or along either rift zone on Kīlauea cannot be ruled out. If a new outbreak or surge in lava to Puʻu ʻŌʻō occurs, we will expect a drop in the summit lava lake. 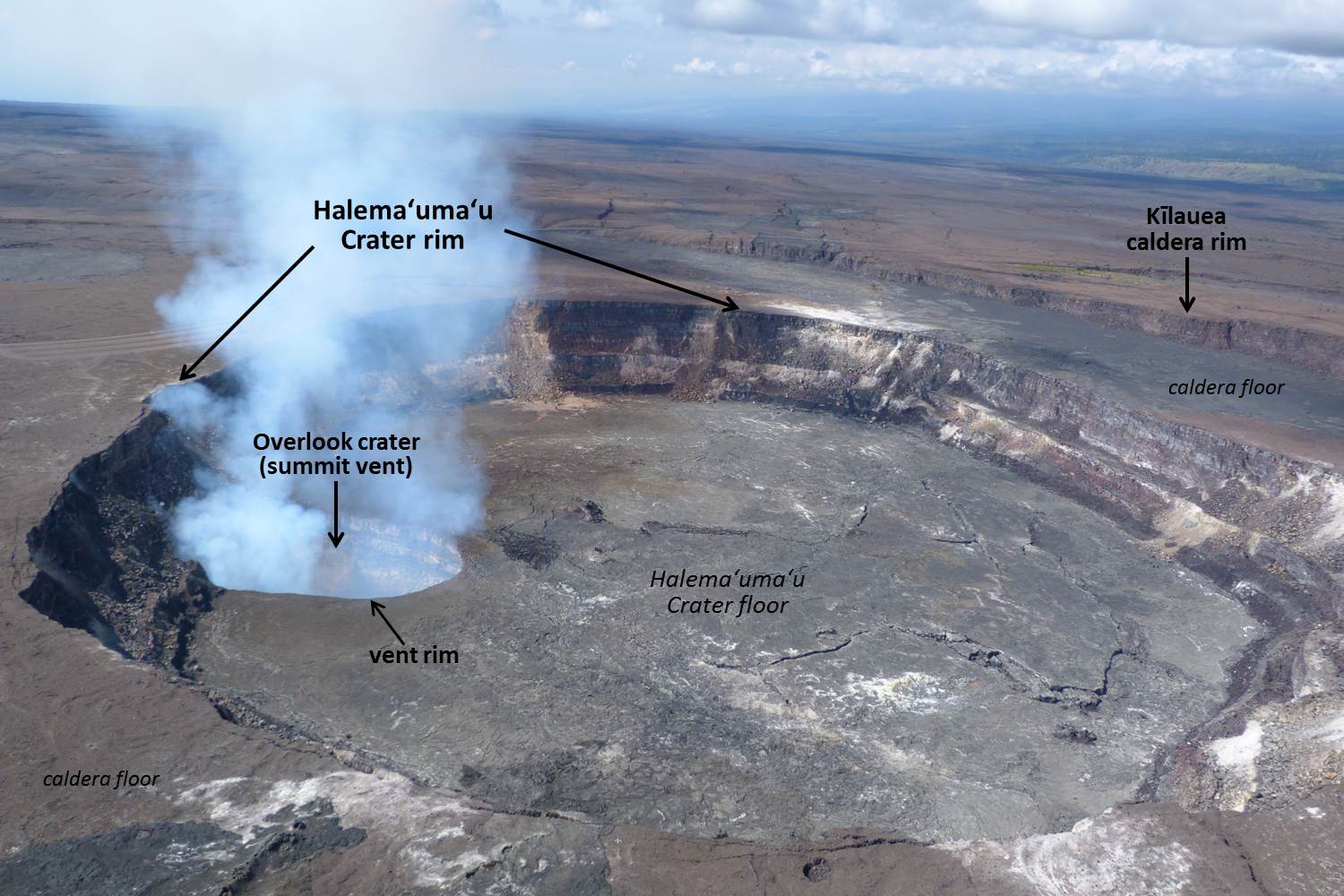 An annotated photograph showing summit features named in this statement, such as Overlook crater and Halemaʻumaʻu. Image credit: USGS/HVO.

Featured image: An early morning view of the lava lake with a recent overflow onto the floor of Halemaʻumaʻu Crater – April 29, 2015. Image credit: USGS/HVO.