Auroras are the most visible manifestation of the Sun’s effect on Earth, but many aspects of these spectacular displays are still poorly understood. Thanks to ESA’s Cluster and NASA’s Image satellites working together, a particular type of very high-latitude aurora – theta aurora – has now been explained.

Although separated by some 150 million kilometres, the Sun and Earth are connected by the solar wind. This stream of plasma – electrically charged atomic particles – is launched by the Sun and travels across the Solar System, carrying its own magnetic field with it.

Depending on how this ‘interplanetary magnetic field’ is aligned with Earth’s magnetic field when it arrives, there can be various results.

At the point where the two fields meet, Earth’s magnetic field points north. If the interplanetary field is pointing south, then ‘magnetic reconnection’ can occur, where magnetic field lines pointing in opposite directions spontaneously break and reconnect with other nearby field lines.

The ultimate result can be colourful displays in the night sky known as the Northern or Southern Lights, produced when the particles are channelled along Earth’s magnetic field lines and strike atoms high in the atmosphere.

The interaction with oxygen atoms results in a green or, more rarely, red glow in the night sky, while nitrogen atoms yield blue and purple colours.

Normally, the main region for this impressive display is the ‘auroral oval’, which lies at around 65–70 degrees north or south of the equator, encircling the polar caps.

But when the interplanetary magnetic field points northward, auroras can occur at even higher latitudes. One type is known as a ‘theta aurora’ because seen from above it looks like the Greek letter theta – an oval with a line crossing through the centre.

While the genesis of the auroral oval emissions is reasonably well understood, the origin of the theta aurora was unclear until now.

Left: The development of the theta aurora on 15 September 2005, as seen by NASA’s IMAGE far-ultraviolet wideband imaging camera. Each frame is projected onto a grid of magnetic latitude against magnetic local time, with local noon at the top and dawn to the right.

The footprint of the Cluster satellites is indicated by a red dot. Times are indicated in the clock.

Initially the aurora conformed to a standard ‘oval’ configuration, but then, at about 16:40 GMT, a small feature emerged from the nightside and grew into a transpolar arc, connecting the two sides of the oval and intersecting with the footprint of the Cluster satellites at around 17:15 GMT. The arc eventually moves past the satellites and dissipates, corresponding with the interplanetary magnetic field turning southward from an initially northward direction.

Right: Cluster measurements during the development of the theta aurora. The uncharacteristically energetic plasma corresponds to the times where the ‘arc’ of the theta aurora is seen to intersect the spacecraft footprint in the IMAGE data.

A clue comes from the particles observed in the two ‘lobe’ regions of the magnetosphere. The plasma in the lobes is normally cold, but previous observations suggested that theta auroras are linked with unusually hot lobe plasma, though quite how was unclear.

“The possibilities have been debated since the first satellite observations of the phenomenon were made in the 1980s,” describes Robert Fear of the University of Southampton in the UK (formerly at the University of Leicester), and lead author of the paper reporting the results inSciencethis week.

“Previously it was unclear whether this hot plasma was a result of direct solar wind entry through the lobes of the magnetosphere, or if the plasma is somehow related to the plasma sheet on the night side of Earth.

“One idea is that the process of magnetic reconnection on the night side of Earth causes a build-up of ‘trapped’ hot plasma in the higher latitude lobes.” 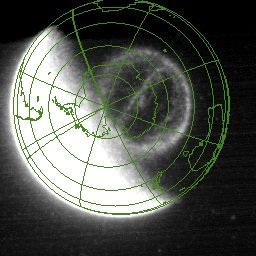 The mystery was finally solved by studying data collected simultaneously by the Cluster and Image satellites on September 15, 2005. While the four Cluster satellites were located in the southern hemisphere magnetic lobe, Image had a wide-field view of the southern hemisphere aurora. As one Cluster satellite observed uncharacteristically energetic plasma in the lobe, Image saw the ‘arc’ of the theta aurora cross the magnetic footprint of Cluster.

“We found that the energetic plasma signatures occur on high-latitude magnetic field lines that have been ‘closed’ by the process of magnetic reconnection, which then causes the plasma to become relatively hot,” says Dr Fear.

“Because the field lines are closed, the observations are incompatible with direct entry from the solar wind. By testing this and other predictions about the behaviour of the theta aurora, our observations provide strong evidence that the plasma trapping mechanism is responsible for the theta aurora.”

“The study highlights the intriguing process that can occur in the magnetosphere when the interplanetary magnetic field of the solar wind points northwards,” adds Philippe Escoubet, ESA’s Cluster project scientist.

“This is the first time that the origin of the theta aurora phenomenon has been revealed, and it is thanks to localised measurements from Cluster combined with the wide-field view of Image that we can better understand another aspect of the Sun–Earth connection.”