Super Typhoon Hagupit, locally known as Ruby, is about to bear down on the Philippines this weekend. More than 30 million people will be impacted by this cyclone. Some areas in its path are still trying to recover from Haiyan, which will leave them more vulnerable to the impacts of Hagupit.

According to JTWC the system is moving west at speed of 11 km/h. JMA reported the system's minimum central pressure of 915 MB and gusts of 280 km/h.

Hagupit rapidly strengthened into a super typhoon late on December 3, and soon after reached maximum sustained winds over 255 km/h (160 mph), the equivalent to a Category 5 hurricane.

The system started to weaken after going through some higher wind shear, but Hagupit soon re-strengthened back to a super typhoon. It will slow its forward speed as it approaches and moves through the Philippines from December 6 and into early next week. Due to this slow movement, areas will experience this extreme weather for a long duration, further increasing the damage and impacts of the storm. 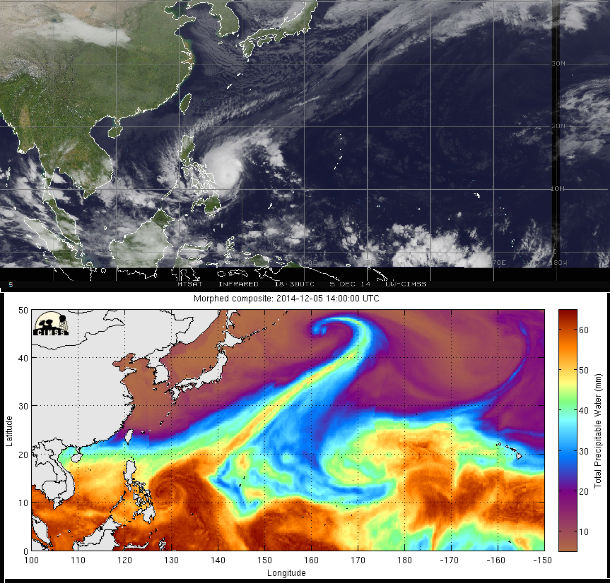 The current forecast from JMA shows the storm more on a westerly track while JTWC and PAGASA take it slightly west-northwest through southern Luzon and Northern Visayas.

Wind gusts over 240 km/h (150 mph) are expected near landfall in eastern Visayas, in area within 100 miles of where Super Typhoon Haiyan made landfall last year. Hundreds of thousands of people still live in vulnerable coastal areas of Tacloban and other areas that were ravaged by Haiyan, which killed or left missing more than 7 350 people. Roughly one million people live in unsafe housing across the areas hit by Haiyan. 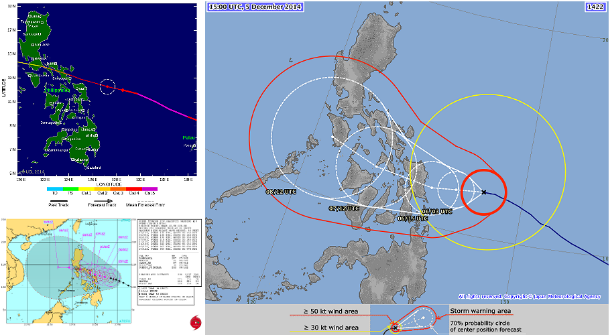 Hagupit could bring a deadly, destructive storm surge near and just north of where landfall occurs, as it was the case with Haiyan. The coast of Western Samar, Northern Samar, Sorsogon, Albany, Camarines Sur and Catanduanes provinces are the most susceptible at this time.

Severe flooding is expected as it will produce heavy rainfall with 150 – 300 mm (6 – 12 inches) falling across much of Visayas as well as southern and eastern Luzon. Widespread flooding along with a heightened risk for mudslides will be the greatest threat.

Hagupit will weaken again due the land interaction as it moves westward across the Philippines. However, it will may still be a typhoon when it emerges into the South China Sea to the west of the Philippines and continue westward. Another landfall with life-threatening impacts is possible in Vietnam late next week.