Source of volcanoes may be much closer than scientists thought…

A long-held assumption about the Earth is discussed in today's edition of Science, as Don L. Anderson, an emeritus professor with the Seismological Laboratory of the California Institute of Technology, and Scott King, a professor of geophysics in the College of Science at Virginia Tech, look at how a layer beneath the Earth's crust may be responsible for volcanic eruptions.

The discovery challenges conventional thought that volcanoes are caused when plates that make up the planet's crust shift and release heat.

Instead of coming from deep within the interior of the planet, the responsibility is closer to the surface, about 80 kilometers to 200 kilometers deep — a layer above the Earth's mantle, known as the asthenosphere. 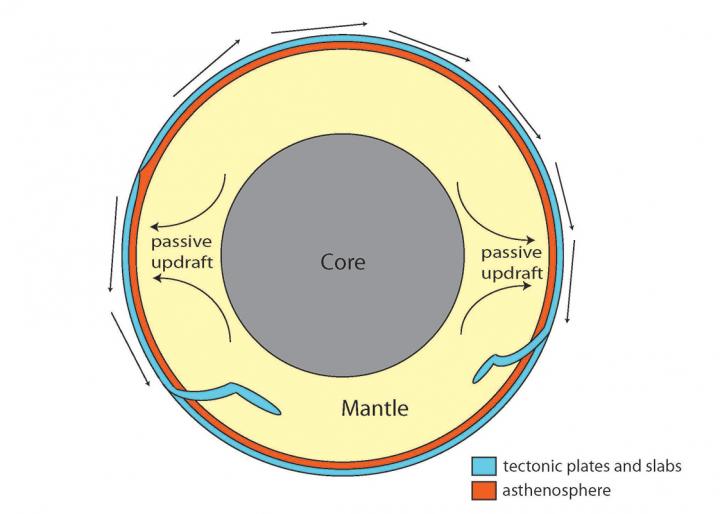 Traditional thought holds that hot updrafts from the Earth's core cause volcanoes, but researchers say eruptions may stem from the asthenosphere, a layer closer to the surface. Image credit: Virginia Tech

"For nearly 40 years there has been a debate over a theory that volcanic island chains, such as Hawaii, have been formed by the interaction between plates at the surface and plumes of hot material that rise from the core-mantle boundary nearly 1,800 miles below the Earth's surface," King said. "Our paper shows that a hot layer beneath the plates may explain the origin of mid-plate volcanoes without resorting to deep conduits from halfway to the center of the Earth."

Traditionally, the asthenosphere has been viewed as a passive structure that separates the moving tectonic plates from the mantle.

As tectonic plates move several inches every year, the boundaries between the plates spawn most of the planet's volcanoes and earthquakes.

The work of Anderson and King, however, shows that the hot, weak region beneath the plates acts as a lubricating layer, preventing the plates from dragging the material below along with them as they move.

The researchers show this lubricating layer is also the hottest part of the mantle, so there is no need for heat to be carried up to explain mid-plate volcanoes.

"We're taking the position that plate tectonics and mid-plate volcanoes are the natural results of processes in the plates and the layer beneath them," King said.