Earth has split open between the Bardarbunga and Askja volcanoes in Iceland and spewed lava and hot gas. According to the University of Iceland, as of September 9, 2014, the new lava flow was 16 kilometers (10 miles) long and covered about 20 square kilometers (8 square miles).

Holuhraun has spewed more lava this month than any Icelandic volcano since the 19th century. 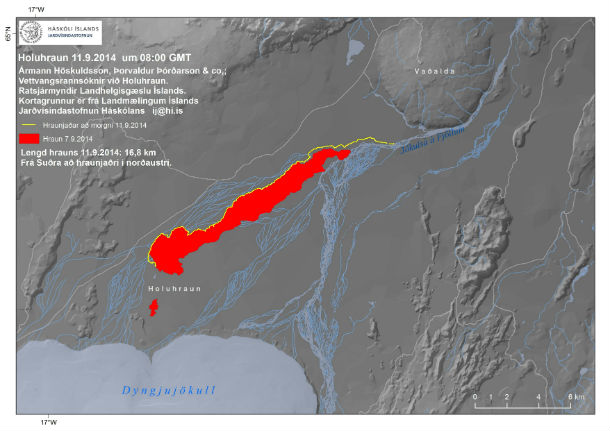 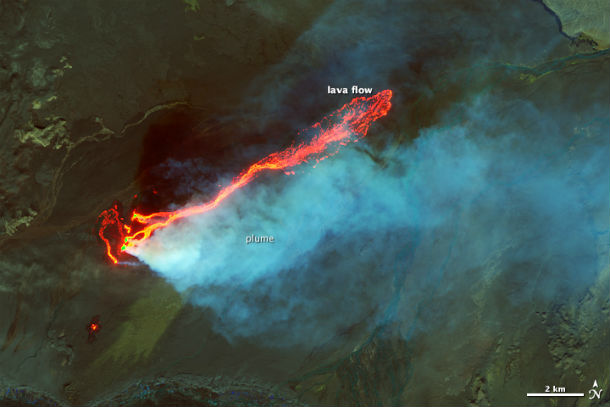 ​A blue haze of SO2 and aerosols has been observed downwind over several towns and villages in eastern Iceland. Due to dangerous levels of gas emissions, scientists have been forced to evacuate the Holuhraun area several times since the eruption began and cautioned to keep gas masks handy due to noxious gases and shifting winds.

Local wind anomalies can occur at the eruption site due to thermal convection from the hot lava. In the atmosphere SO2 is converted into sulfuric acid when it reacts with water.

The plume from Holuhraun is rich with sulfur dioxide (SO2), a rotten-smelling gas that can cause respiratory problems in humans and animals. SO2 is a gas with a pungent odor that irritates skin and the tissues and mucous membranes of the eyes, nose, and throat. Sulfur dioxide chiefly affects upper respiratory tract and bronchi. 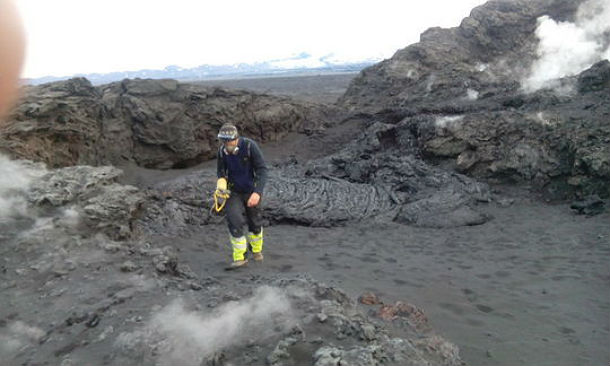 The effects of SO2 on people and the environment vary widely depending on  the amount of gas a volcano emits into the atmosphere and the regional or global wind and weather pattern that disperses the gas.

The World Health Organization recommends a concentration of no greater than 0.5 ppm over 24 hours for maximum exposure.

The Bardarbunga and Holuhraun volcanoes have been active since mid-August. The activity has been seen as effusive lava eruptions and fountains with increased seismic activity but without release of volcanic ash.

However, there has been continuous SO2 emissions and thus, high SO2 values have been observed over the northern Atlantic, from Greenland to Scandinavia and Ireland. 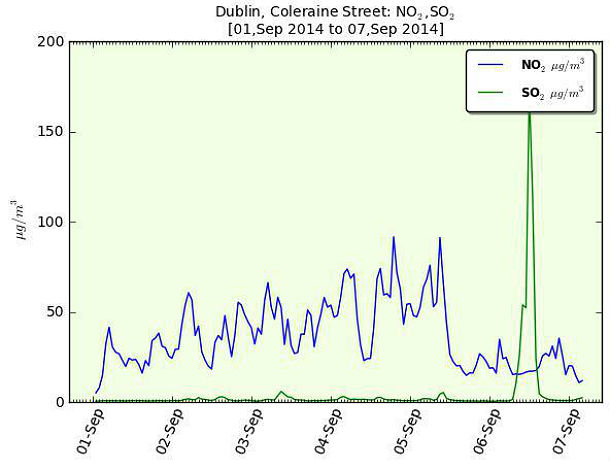 On September 6, 2014 the concentration of sulfur dioxide (SO2) measured in Ireland for several hours in the air increased massively. The peak in the chart was measured in the capital of Ireland, Dublin. 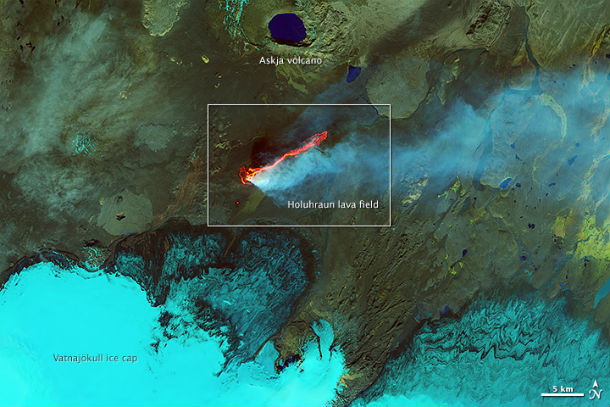 On September 6, 2014, the Operational Land Imager (OLI) on Landsat 8 captured this infrared view of the ongoing eruption. Ice and the plume of steam and sulfur dioxide appear cyan and bright blue, while liquid water is navy blue. Bare or rocky ground around the Holuhraun lava field appears in shades of green or brown in this band combination. Fresh lava is bright orange and red. (Credit: NASA/Landsat)

The Environment Agency of Iceland has increased gas monitoring in inhabited areas in East Iceland. Scientific Advisory Board reported on September 9, 2014 that air quality in urban areas in East of Iceland may affect people with underlying respiratory problems although others should not experience any significant discomfort.

Iceland Civil Protection and Emergency Management warned of high concentration of SO2 was measured at Reyðarfjordur in the eastern fjords on September 10, 2014 and peaked at 2600 µg/m3.

Warning was issued to members in sensitive groups, including healthy individuals with mild asthma. Most asthmatics who are active outdoors are likely to experience some breathing difficulties. 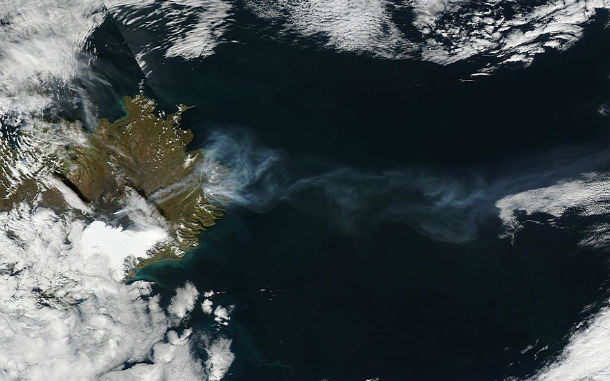 According to Manuel Sintubin, professor in Geodynamics at the University of Leuven, the toxic gases from Holuhraun can be compared with the Laki eruption, which lasted for eight months from 1783 to 1784, and released big amounts of toxic sulfurous gases. Haze from the eruption was reported from Iceland to Syria. It is estimated that 80 Mt of sulfuric acid aerosol was released by that eruption.

Measurements from recent eruptions such as Mount St. Helens, in 1980, El Chichon, Mexico in 1982, and Mount Pinatubo, Philippines in 1991, clearly show the importance of sulfur aerosols in modifying climate, warming the stratosphere, and cooling the troposphere. SO2 converts to sulfuric acid aerosols that block incoming solar radiation and contribute to ozone destruction. The effects from volcanoes are short lived and after two or three years, the volcanic particles settle out of the atmosphere.

On a global scale, volcanic gases actually created the atmosphere and oceans. Once a volcano erupts, gases are emitted and released into the atmosphere. During large eruptions, gases have actually caused global climate change.

In other systems, gases are emitted continuously into the atmosphere from soils, volcanic vents, fumaroles and hydrothermal deposits. The gradual release of gas acts as an irritant and may pose long-term health-hazards.