A significant fireball exploded over central New Mexico at 07:29 UTC on March 6, 2014. According to Thomas Ashcraft, who caught it on his fireball camera, it was brighter than the full Moon and it shook houses from its sonic boom. Ashcraft operates a fireball camera and forward-scatter meteor radar at his private observatory near Santa Fe. You can see the movie he recorded here. 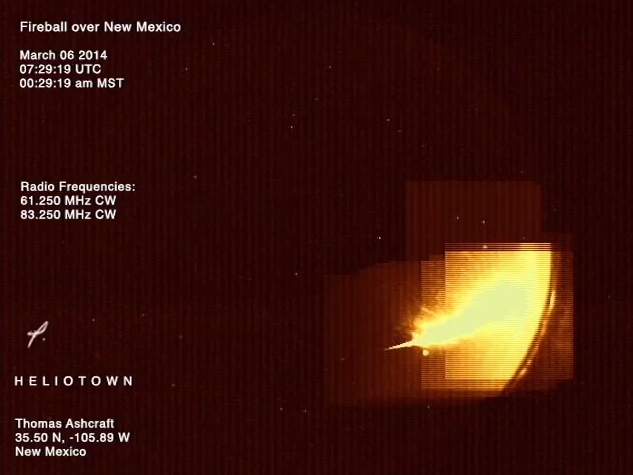 Approximately two hours later (~09:29 UTC on March 6, 2014), a similar fireball streaked over Yellowknife, Canada. The flash was so bright that it turned the night sky blue. Few minutes later, a huge explosion was heard from the same direction.

Yuichi Takasaka took the following picture from the verge of Vee Lake: 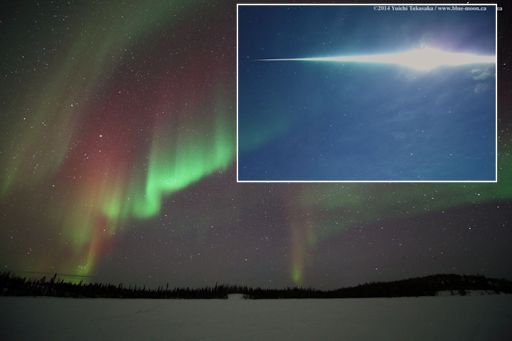 "I was leading an Aurora Photography Tour," says Takasaka. "We had quite colourful auroras all night. All of sudden at 02:13 local time, one shooting star started from Western sky and exploded towards North. It got so bright that I had to close my eyes like someone used electric flash in front of me. A few minutes later, we could hear the huge explosion from the direction of the fireball fell. What an exciting night!!!"

See more images of the fireball Yuichi Takasaka took on the night of March 6th.

According to SpaceWeather, there is no known connection between these two events or the asteroid 2014 EC, which flew past Earth on March 6th… "They are probably random meteoroids of the type that strike Earth's atmosphere every night."