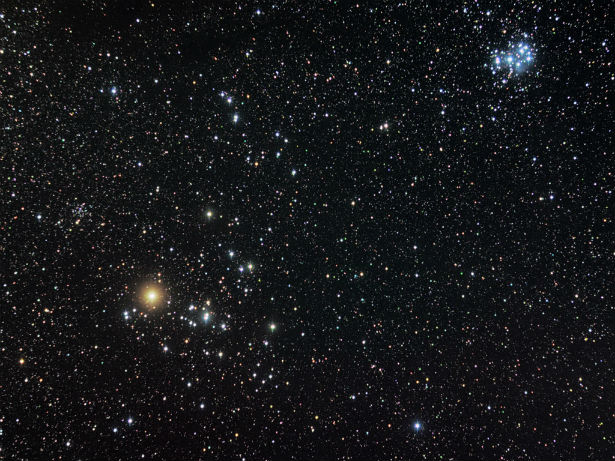 What to look for in the night sky during August 2013?! Your guide to constellations, deep-sky objects, planets and events.

In the evening twilight, brilliant Venus makes a dazzling appearance over the western horizon. Catch it quickly before it sets.

Higher in the sky, Saturn slowly dips toward the western horizon throughout the evening. Aim a telescope at the planet to reveal its stunning rings..

Constellations and Deep-Sky Objects
Stargazing on a hot August night reveals a multitude of wonders in the summer night sky.

Lyra, the Small Harp, lies high in the late evening sky. Its main star is the great Vega, one of the brightest in the sky.

Look for Lyra by locating Vega and then the parallelogram of stars nearby.

Epsilon Lyrae, the bright star near Vega, is actually a wonderful quadruple-star system, known as the Double-Double.

In the parallelogram of Lyra lies the dramatic Ring Nebula. It is an expanding shell of glowing gas expelled by the dying star at its center.

The great constellation Cygnus, the Swan, flies high through the August night.

Using bright Vega as your guide star, look for the cross just to the east. Cygnus is also known as the Northern Cross.

Albireo, at the head of the Swan, is a showpiece for small telescopes. This spectacular pair of stars features contrasting colors of sapphire and golden topaz.

Deneb, the Swan's tail, is a supergiant star. If Deneb replaced the Sun in the center of our solar system, it would engulf Mercury and Venus.

On a clear night, hazy patches of nebulae can be seen by casually panning across the Cygnus area with binoculars.

The most prominent is the North America Nebula, an area of gas and dust illuminated by the nearby, brilliant star Deneb.

Cygnus also hosts several clusters of stars. The easiest to find are M29 and M39.

M29 is found near the center of the Northern Cross. When viewed in a small telescope, it resembles a small square.

Best seen in binoculars, M39 is a loosely bound cluster of about 30 stars, just to the north of Deneb.

Vulpecula hosts the Dumbbell Nebula, which can be seen as a faint smudge in binoculars. A small telescope reveals its double-lobed shape.

Aquila, the Eagle, was known to the ancient Greeks as the great bird of Zeus.

Altair, the brightest star in Aquila, is only 16 light-years from Earth.

The bright stars of the summer night sky, Vega, Altair, and Deneb, make up the Summer Triangle.

Use binoculars to look for the Coathanger, located halfway between Altair and Albireo. This remarkable little group of stars forms a familiar pattern from our point of view.

Morning Planets
Early in the month, Jupiter, Mars, and Mercury line up in the eastern morning sky.

Mercury slips into the horizon by mid-month, while Mars and Jupiter rise higher in the pre-dawn sky.

Events
The Perseid meteor shower is an always-anticipated feature of the August night sky.

Look for meteors during the early morning hours of August 12th and 13th.

These streaks of light are tiny bits of a comet burning up as they enter Earth's atmosphere. The cometary debris trail, through which Earth passes once a year, was left behind by Comet Swift-Tuttle during its many visits to the inner solar system.

The night sky is always a celestial showcase. Explore its wonders from your own backyard.