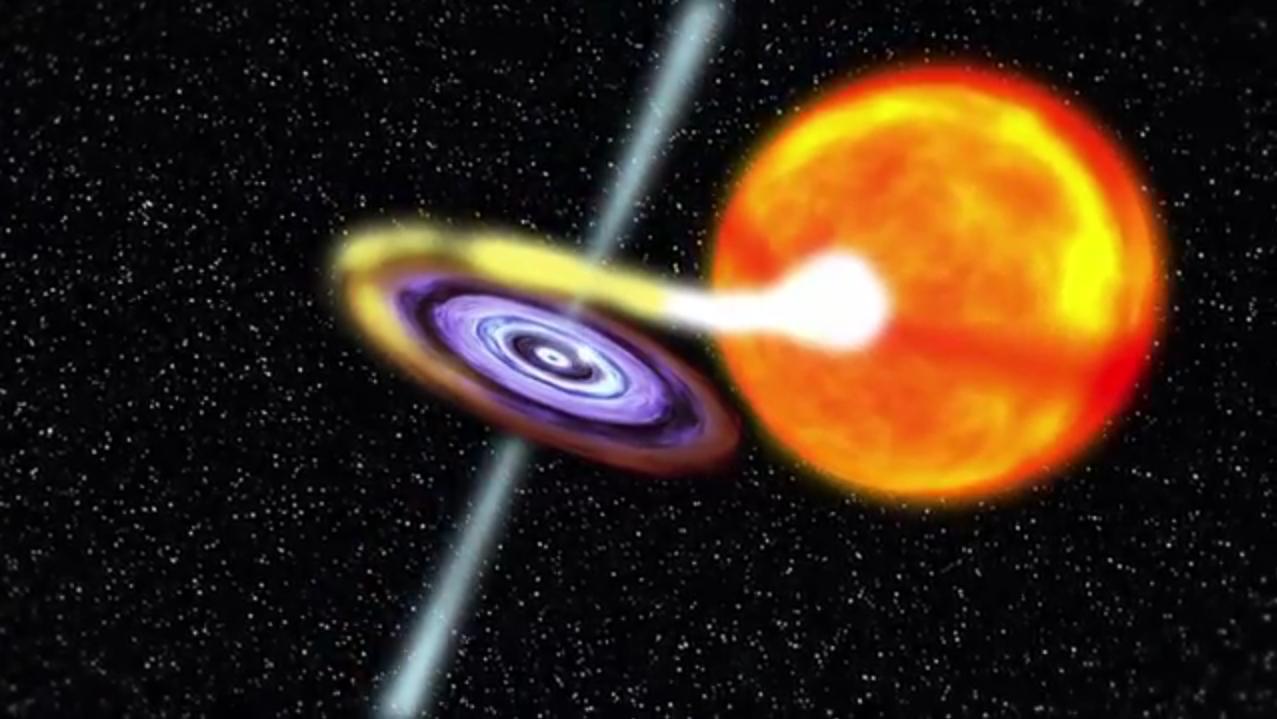 NASA’s Swift satellite has discovered a stellar-mass black hole toward center of our Milky way galaxy. With its advantageous X-rays detection ability, Swift found a rare Nova as a result of high energy X-ray outburst in mid-September; leading to discovery of black hole. As per NASA’s news release, An X-ray nova is a short-lived X-ray source that appears suddenly, reaches its emission peak in a few days and then fades out over a period of months. The outburst arises when a torrent of stored gas suddenly rushes toward one of the most compact objects known, either a neutron star or a black hole.

Scientists suggest this nova is about 20,000 to 30,000 light-years away on the inner side of milky way. It is dubbed as Swift J1745-26 based on coordinates of its position in the sky. From the center of our galaxy, it is few degrees toward the constellation Sagittarius. Astronomers observing from ground based observatories were unable observe it in visible light because of thick dust clouds, though they did detect infrared and radio emissions. Neil Gehrels, the mission’s principal investigator, at NASA’s Goddard Space Flight Center in Greenbelt, Md said,

“”Bright X-ray novae are so rare that they’re essentially once-a-mission events and this is the first one Swift has seen. This is really something we’ve been waiting for.”

As per latest Swift mission post, rapidly brightening source triggered Swift’s Burst Alert Telescope twice on the morning of Sept. 16, and once again the next day. The nova peaked in hard X-rays — energies above 10,000 electron volts, or several thousand times that of visible light — on Sept. 18, when it reached an intensity equivalent to that of the famous Crab Nebula, a supernova remnant that serves as a calibration target for high-energy observatories and is considered one of the brightest sources beyond the solar system at these energies. After dimming at higher energies, the nova brightened in the lower-energy, or softer, emissions detected by Swift’s X-ray Telescope, a behavior typical of X-ray novae. By Wednesday, Swift J1745-26 was 30 times brighter in soft X-rays than when it was discovered and it continued to brighten.

Mission scientists say Swift J1745-26 is a member of a low-mass X-ray binary (LMXB) system. Such system includes a normal star, like our sun. A stream of gas flows from the normal star and enters into a storage disk around the black hole. In most LMXBs, the gas in the disk spirals inward, heats up as it heads toward the black hole, and produces a steady stream of X-rays. But under certain conditions, stable flow within the disk depends on the rate of matter flowing into it from the companion star. At certain rates, the disk fails to maintain a steady internal flow and instead flips between two dramatically different conditions — a cooler, less ionized state where gas simply collects in the outer portion of the disk like water behind a dam, and a hotter, more ionized state that sends a tidal wave of gas surging toward the center. John Cannizzo, a Goddard astrophysicist said,

“Each outburst clears out the inner disk, and with little or no matter falling toward the black hole, the system ceases to be a bright source of X-rays. Decades later, after enough gas has accumulated in the outer disk, it switches again to its hot state and sends a deluge of gas toward the black hole, resulting in a new X-ray outburst.” 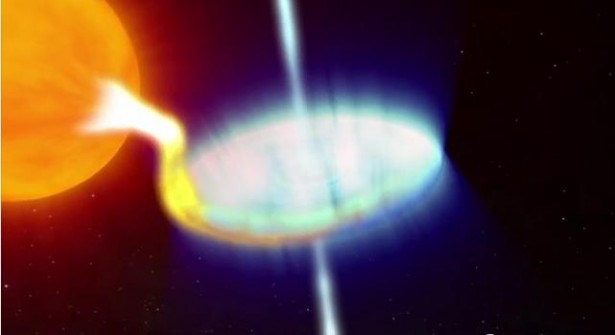 It is termed as thermal-viscous limit cycle. Astronomers explain transient outbursts across a wide range of systems with its help. From protoplanetary disks around young stars, to dwarf novae — where the central object is a white dwarf star — and even bright emission from supermassive black holes in the hearts of distant galaxies; this phenomenon provides most suited explanation.

Goddard Space Flight Center manages Swift satellite, which was launched in November 2004. It is operated in collaboration with Penn State, the Los Alamos National Laboratory in New Mexico and Orbital Sciences Corp. in Dulles, Va., with international collaborators in the United Kingdom and Italy and including contributions from Germany and Japan.