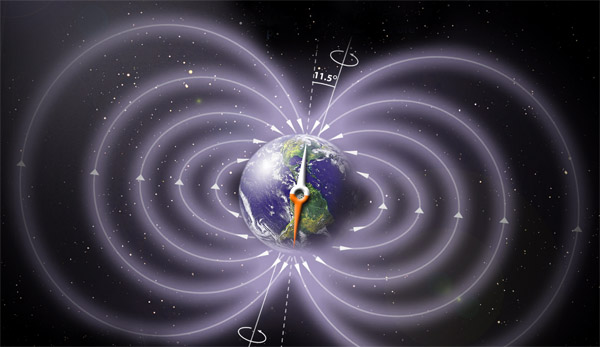 A new finding suggests that shifts in the geomagnetic field are connected to growth of the inner core. Peter Olson and Renaud Deguen of Johns Hopkins University in Baltimore, Maryland, used numerical modelling to establish that the axis of Earth’s magnetic field lies in the growing hemisphere. While one side of Earth’s solid inner core grows slightly, the other half melts.

As the Earth spins, the molten iron inside churns and flows in a fairly stable manner for millennia. For some reason during geomagnetic reversal, some instability causes an interruption to the steady generation of a global magnetic field, causing it to flip-flop between the poles. In addition to the North-South dipole, there is a weaker magnetic field spread around the planet, probably generated in the outer core of the Earth.

Researchers speculate that rapid movements of the field’s axis to the east in the last few hundred years may be a precursor to the north and south poles trading places. Earth’s  magnetic field reverses direction every few thousand years, and if it happened now, we would be exposed to solar winds capable of knocking out global communications and power grids.

Seismic images of Earth’s inner core reveal an east–west dichotomy. This dichotomy has been interpreted as lopsided growth, with faster solidification on one hemisphere of the inner core boundary, and slower solidification and perhaps melting on the other. New study suggest a correlation between these shifts and reversals of Earth’s magnetic field. 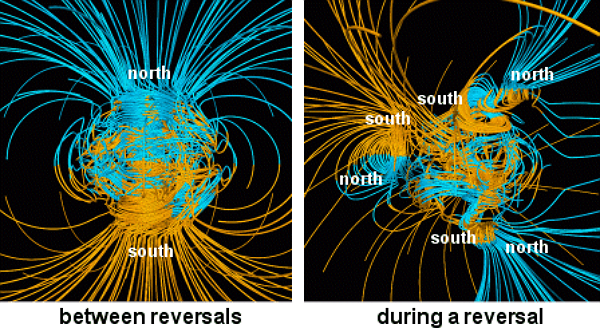 Bruce Buffett of the University of California, Berkeley, says the authors present an intriguing proof of concept with their model.

Most of the time the Earth’s field is dominated by a geocentric axial dipole component, with normal and reversed polarities represented in essentially equal portions. Polarity reversals are the transitions between these two states. Excursions are possibly related phenomena. During an excursion the field departs substantially from a geocentric axial dipole for a few thousand years, then returns to its original polarity. 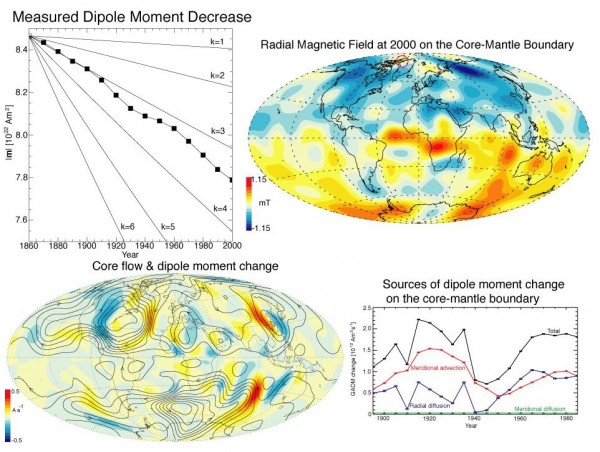 The Earth’s field has alternated between periods of normal polarity, in which the direction of the field was the same as the present direction, and reverse polarity, in which the field was in the opposite direction. These periods are called chrons. The time spans of chrons are randomly distributed with most being between 0.1 and 1 million years. Most reversals are estimated to take between 1,000 and 10,000 years. The latest one, the Brunhes–Matuyama reversal, occurred 780,000 years ago. But brief disruptions that do not result in reversal are called geomagnetic excursions.

Motion of the earth’s liquid core, the so-called geodynamo, generates its magnetic field. Gauthier Hulot of the Institut de Physique du Globe de Paris and his colleagues used satellite data recorded 20 years apart to track changes in this field. In two regions of the boundary between the earth’s core and the overlying mantle, the researchers detected a reversed magnetic field. In a section lying beneath the southern tip of Africa, the magnetic field points toward the center of the earth opposite to the dominant outward-pointing field of the Southern Hemisphere. And a second congregation of reversed-flux patches exists near the North Pole. Having modeled the growth and movement of these inverted-flux sections, they can now account for nearly the entire decrease in the main dipole field of the earth over the past 150 years. 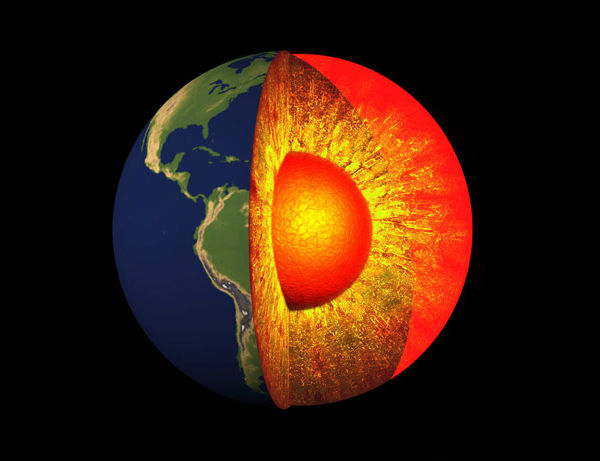 After some 400 years of relative stability, Earth’s North Magnetic Pole has moved nearly 1,100 kilometers out into the Arctic Ocean during the last century and at its present rate could move from northern Canada to Siberia within the next half-century. However, rapid movement of the magnetic pole doesn’t necessarily mean that our planet is going through a large-scale change that would result in the reversal of the Earth’s magnetic field. It may also be part of a normal oscillation. Calculations of the North Magnetic Pole’s location from historical records goes back only about 400 years, while polar observations trace back to John Ross in 1838 at the west coast of Boothia Peninsula.

Some scientists point that the Northern Lights, which are triggered by the sun and fixed in position by the magnetic field, drift with the movement of the North Magnetic Pole and may soon be visible in more southerly parts of Siberia and Europe – and less so in northern Canada and Alaska.