A leading Chinese meteorologist says the country will employ more rainmaking technology and make better use of it in the next five years.

Some 560,000 manipulations of the weather have been conducted since 2002 using aircraft, rockets and projectiles carrying dry ice or silver iodide particles to stimulate rainfall, resulting with release of 489.7 billion tons of rain and saved about $10.4 billion in economic losses the China Meteorological Administration reported.

China started with weather modification program in 1958. For the 2008 Olympics, China had 30 airplanes, 4,000 rocket launchers, and 7,000 anti-aircraft guns to stop rain. Each system would shoot various chemicals into any threatening clouds to shrink rain drops before they reach the stadium. In February 2009, China also blasted iodide sticks over Beijing to artificially induce snowfall after four months of drought, and blasted iodide sticks over other areas of northern China to increase snowfall. The snowfall in Beijing lasted for approximately three days and led to the closure of 12 main roads around Beijing. At the end of October 2009 Beijing claimed it had its earliest snowfall since 1987 due to cloud seeding.

Weather modification involves seeding clouds with grains of dry ice (solid carbon dioxide) or tiny particles of silver iodide to stimulate rainfall. The most common form of weather modification is cloud seeding to increase rain or snow, usually for the purpose of increasing the local water supply. Its use has been expanding nationally in recent years to tackle drought, hailstones, forest fires and floods. There is concern over potential pollution hazards attached to the intervention projects.

Weather modification in warfare has been banned by the United Nations. This process can be used in enemy destruction by creating artificial floods, cyclones and typhoons. It can allow controlling the economy and agricultural commodity markets. 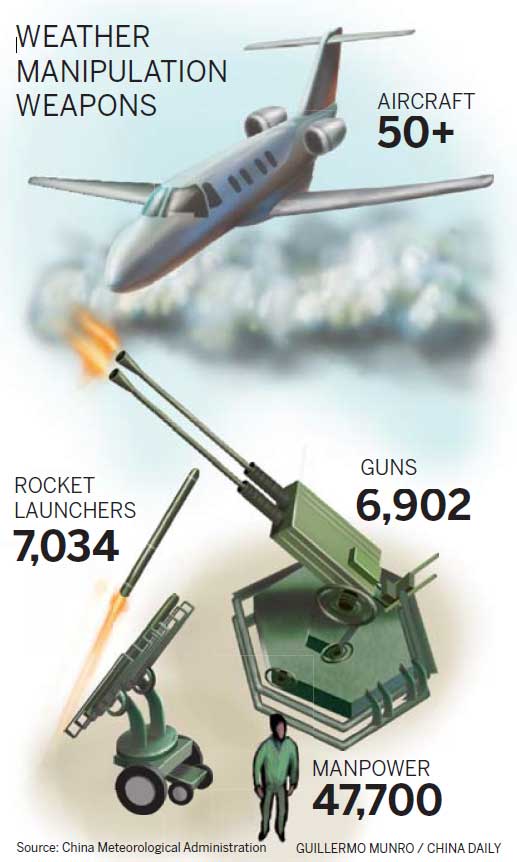 Zheng Guoguang, administrator of the China Meteorological Administration, said China's use of artificial precipitation technologies lags behind the leading countries in the field by 15 to 45%. Rainmaking technology will be better deployed and there will be more of it, a leading meteorologist promised. With more than 6,900 artillery guns, 7,000 rocket launch pads and more than 50 airplanes rented each year, China is able to exploit 50 billion cubic meters of cloud water annually.

In China, many of the nation's natural and agricultural disasters, especially those involving grain and tobacco, are caused by drought. With so many areas in China, especially rural areas, vulnerable to storms, blizzards, hail and other natural disasters, the demand has been rapidly increasing to use science and technology to reduce the risks.

The largest cloud seeding system in the world is that of the People's Republic of China, which believes that it increases the amount of rain over several increasingly arid regions, including its capital city, Beijing, by firing silver iodide rockets into the sky where rain is desired. There is even political strife caused by neighboring regions which accuse each other of "stealing rain" using cloud seeding. About 24 countries currently practice weather modification operationally. The Beijing Weather Modification Office form a part of China's nationwide weather control effort, believed to be the world's largest; it employs 37,000 people nationwide, who seed clouds by firing rockets and shells loaded with silver iodide into them. The office claims to have created a snowstorm in November of 2009.

Cloud seeding is a common technique to enhance precipitation. Evidence on its safety is strong, but there are still doubts about its effectiveness. Cloud seeding entails spraying small particles (like silver iodide) onto clouds in order to affect their development, usually with the goal of increasing precipitation. Cloud seeding only works to the extent that there is already water vapor present in the air. Critics generally contend that claimed successes occur in conditions which were going to lead to rain anyway. It is used in a variety of drought-prone countries, including the United States, the People's Republic of China, India, and Russia. In the People's Republic of China there is a perceived dependency upon it in dry regions. In mountainous areas of the United States such as the Rocky Mountains and Sierra Nevada, cloud seeding has been employed since the 1950s.

The most common chemicals used for cloud seeding include silver iodide and dry ice (solid carbon dioxide). Liquid propane, which expands into a gas, has also been used. This can produce ice crystals at higher temperatures than silver iodide. The use of hygroscopic materials, such as salt, is becoming more popular. Cloud seeding chemicals may be dispersed by aircraft (as in the second figure) or by dispersion devices located on the ground (generators, as in first figure, or canisters fired from anti-aircraft guns or rockets). For release by aircraft, silver iodide flares are ignited and dispersed as an aircraft flies through the inflow of a cloud. When released by devices on the ground, the fine particles are carried downwind and upwards by air currents after release. 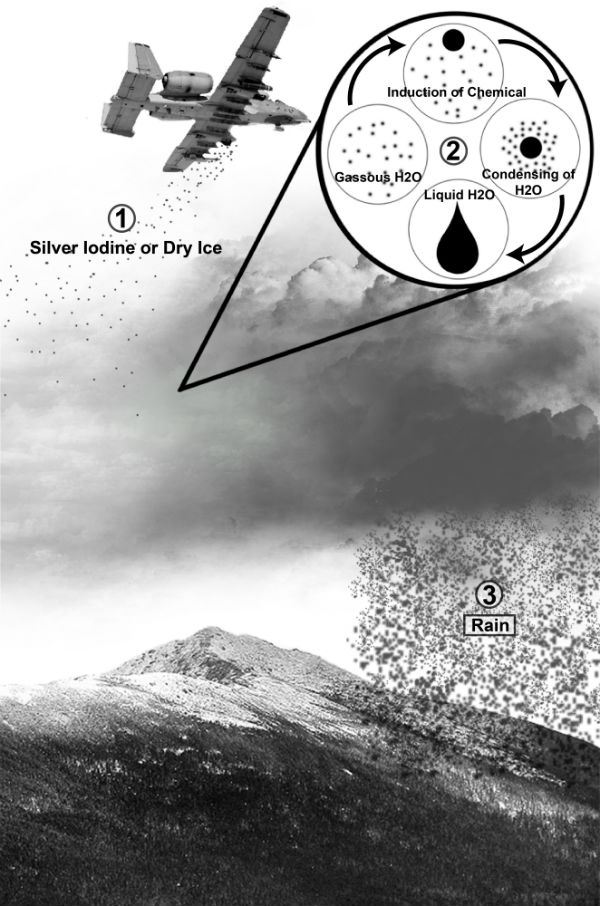 An electronic mechanism was tested in 2010, when infrared laser pulses were directed to the air above Berlin by researchers from the University of Geneva. The experimenters posited that the pulses would encourage atmospheric sulfur dioxide and nitrogen dioxide to form particles that would then act as seeds. During the sixties, Irving P. Krick & Associates operated a successful cloud seeding operation in the area around Calgary, Alberta. This utilized both aircraft and ground-based generators that pumped silver iodide into the atmosphere in an attempt to reduce the threat of hail damage. Operation Cumulus was a project of the UK government in the 1950s which was investigating weather manipulation, in particular through cloud seeding experiments. 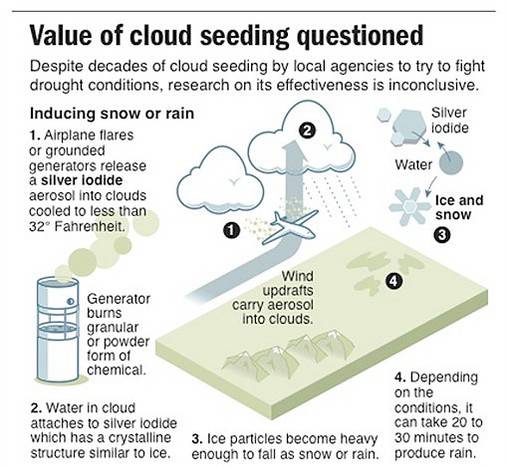 If large-scale weather control were to become feasible, potential negative implications may include unintended side effects (especially given the chaotic nature of weather development), damage to existing ecosystems, health risks to humans, malevolent control or use as a weapon, ELF hot spots causing slightly accelerated ionospheric depletion by solar wind and many more. Silver iodide can cause temporary incapacitation or possible residual injury to humans and mammals with intense or continued but not chronic exposure. Amounts of silver generated by cloud seeding  are 100 times less than industry emissions into the atmosphere in many parts of the world.

Accumulations in the soil, vegetation, and surface runoff have not been large enough to measure above natural background. A 1995 environmental assessment in the Sierra Nevada of California and a 2004 independent panel of experts in Australia confirmed these earlier findings. Environmentalists are concerned about the uptake of elemental silver in a highly sensitive environment affecting the pygmy possum amongst other species as well as recent high level algal blooms in once pristine glacial lakes. Research 50 years ago and analysis by the former Snowy Mountains Authority led to the cessation of the cloud seeding program in the 1950s with non-definitive results. Formerly, cloud seeding was rejected in Australia on environmental grounds because of concerns about the protected species, the pygmy possum.

Cloud-top seeding is usually performed between the temperatures of -5°C and -10°C. The greatest amount of super-cooled liquid water is usually found within this range. This corresponds to an altitude range of 15,000 to 22,000 ft depending upon location. The more modern methods involve artificial ionization of earth’s atmosphere between 15,000 and 30,000 ft. and above. Manipulating the ionosphere and use of controlled solar-terrestrial interactions can create much larger effects. The ionosphere, which acts as a filter for the solar radiations to reach the earth. If one can manipulate and control the filter, it becomes a potential source of massive weather modification. The algorithmic variation of ionosphere can create the effects in a massive scale. And there is HAARP. A super-powerful radiowave-beaming technology that lifts areas of the ionosphere by focusing a beam and heating those areas. Electromagnetic waves then bounce back onto Earth.  The High-Frequency Active Aural Research Program (HAARP) based in Gakona, AAlaska - jointly managed by the US Air Force and the US Navy-- is part of a new generation of sophisticated weaponry under the US Strategic Defense Initiative (SDI). Operated by the Air Force Research Laboratory's Space Vehicles Directorate, HAARP constitutes a system of powerful antennas capable of creating "controlled local modifications of the ionosphere. HAARP could contribute to climate change by intensively bombarding the atmosphere with high-frequency rays. Returning low-frequency waves at high intensity could also affect people's brains, and effects on tectonic movements cannot be ruled out.

WEATHER MANIPULATION and THE RESULTS (compiled by Dee Finney)