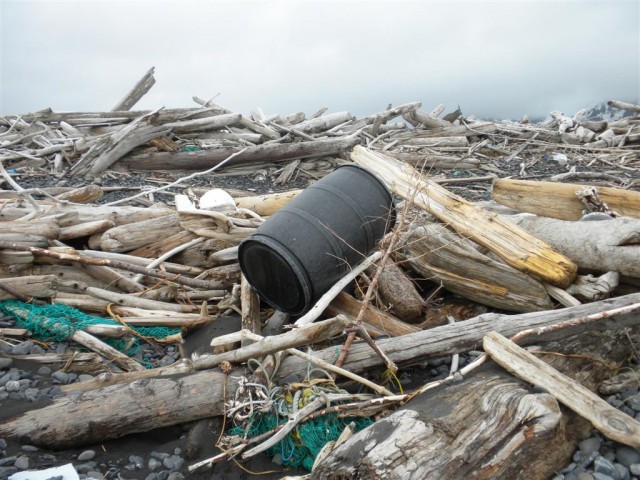 The first wave of Japanese tsunami debris has hit Alaskan shores and is turning part of the area into a landfill. There is no abnormal level of radiation but much of it is toxic, according to CNN video posted below.

It’s even worse on Montague Island, according to Chris Pallister, president of Gulf of Alaska Keeper, a non-profit group which cleans up beaches each spring and summer.

“It’s a staggering mess,” he said during a visit to Kayak Island last Friday, “the magnitude of this is just hard to comprehend and I’ve been looking at this stuff a long time.”

“It is going to take years to clean this mess up,” he told CNN.

U.S. Sen. Mark Begich wants the federal government to provide at least $45 million to clean up debris that will land on U.S. shores from last year’s tsunami in Japan.

While the National Oceanic and Atmospheric Administration has been tracking the problem, Begich says it has limited resources and cannot alone be expected to handle what he calls a “monumental crisis.”

Begich says the debris that’s already washed ashore in Alaska is just the beginning of what he calls a “slow-motion environmental disaster that will unfold over the next several years.”

The Japanese government estimated that the tsunami generated 25 million tons of rubble, but there is no clear understanding of exactly how much debris was swept into the water nor what remained afloat.

The floating debris – which includes destroyed homes, wrecked fishing vessels, and even human remains – is shown in a computerized projection crafted by researchers at the University of Hawaii at Manoa, who say by 2014 the wreckage will stretch from Alaska to Mexico.

The projections, made by Nikolai Maximenko and Jan Hafner at the International Pacific Research Center, show a destructive path covering more than 7200 km (4,500 miles) on Pacific Ocean currents, pushed by wind and water to reach the far-reaching beaches of North America.

The larger debris field is now expected to come ashore this year, according to new estimates by the National Oceanic and Atmospheric Administration.

An earlier model had suggested that the bulk of the debris, which is now dispersed north of the Hawaiian islands, would wash up on the West Coast next year. But now government agencies and local volunteer groups are moving their preparations forward.