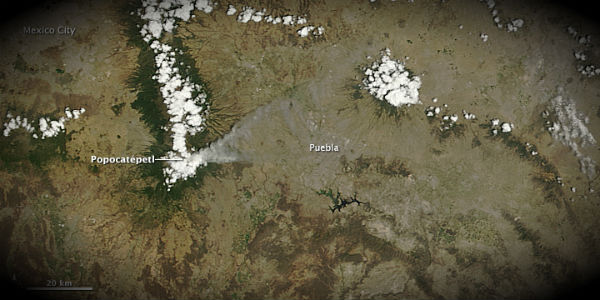 Located about 40 miles (70 km) southeast of Mexico City, Popocatépetl is one of Mexico’s most active volcanoes. Popocatépetl has been erupting since January 2005, with near constant venting from fumaroles punctuated by minor steam, gas, and ash emissions.

Activity began to pick up significantly in mid-April. The volcano began emitting a substantial amount of ash on April 12, 2012, and an explosion on April 13 sent volcanic blocks as far as 500 meters (1,640 feet) away from the crater rim. On April 15, an ash plume rose 1.5 kilometers (0.9 miles feet) above the crater. When the Advanced Spaceborne Thermal Emission and Reflection Radiometer (ASTER) instrument on NASA’s Terra satellite captured the false-color image (bellow) of the volcano at 17:17 UTC (12:17 PM local time) on April 23, a plume of gas and steam was visible drifting east above the crater. The red depicts forests and vegetation surrounding the volcano. 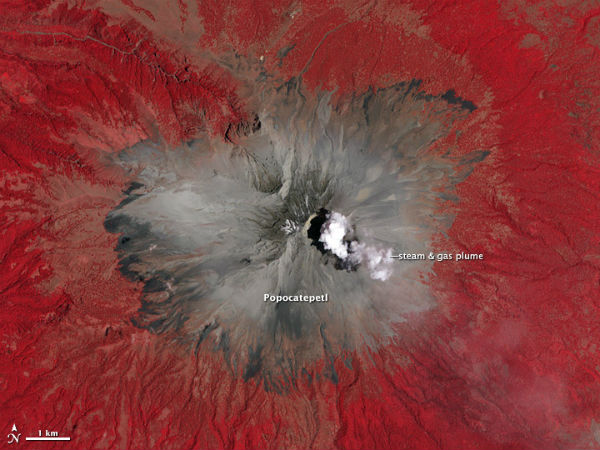 According to the U.S. Geological Survey (USGS), on April 17, the volcano’s gas and ash plume reached a height of about 980 feet (~300 meters), spreading ash in the nearby town of Puebla. The Alert level at the volcano remains at “Yellow Phase Three,” according to Mexico’s National Center for Prevention of Disasters (CENAPRED).That alert means explosive activity could escalate, there may be growth of domes or expulsion of magma, and ash could rain on populated areas.

The Mexican National Center for Prevention (CENAPRED) issued an update about the eruption on April 23, noting that seven small-to-moderate-sized ash emissions had occurred within an 11 hour period. When CENAPRED released its update, a continuous plume of steam and gas 100 meters (328 feet) above the crater was blowing south-southwest. 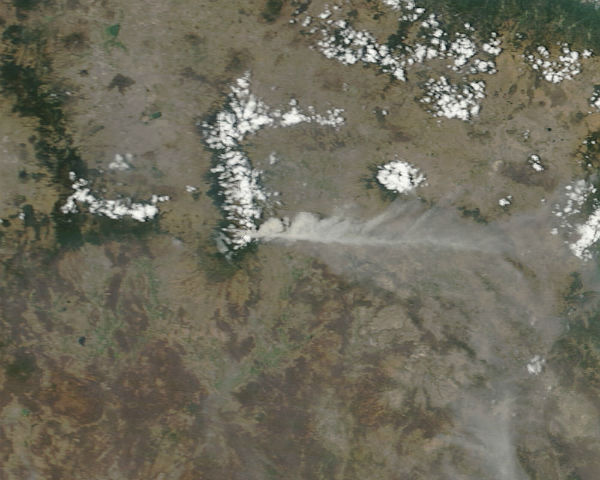 NASA has animated imagery from NOAA’s GOES-13 satellite to provide a week long look at the volcano’s activity. You can watch it here. NOAA’s Geostationary Operational Environmental Satellite, GOES-13, captures visible and infrared images of weather over the eastern U.S. every 15 minutes, and spotted an ash and gas cloud streaming from Mexico’s Popocatepetl Volcano over the period from April 14 through April 22, 2012. The one minute, 14 second black and white video covers shows the volcano’s ash mostly blowing to the southeast. NOAA operates the GOES series of satellites, and NASA’s GOES Project, at NASA Goddard compiles the images into animations.

The last major eruption of Popocatépetl occurred in 800 A.D., in which vast amounts of lava and ash from the volcano completely filled many of the surrounding valleys. Since then, there have been at least five moderate eruptions, two of which occurred in the 1900s. “Popocatepetl” is the Aztec word for “smoking mountain,” and is North America’s second-highest volcano.