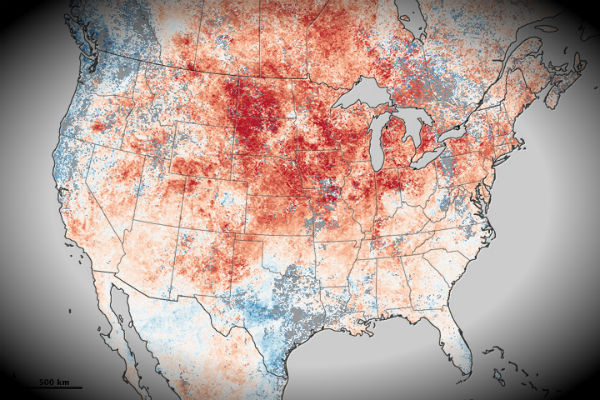 The springtime began to feel more like summer for most of North America. March 2012 saw thousands of daily temperature records fall in the contiguous United States (often called the “lower 48”), and the entire month was the warmest March in a temperature record that dates back to 1895.

For the month, the eastern two-thirds of the United States, as well as the Canadian provinces of Ontario, Quebec, and Manitoba, saw temperatures in the GISS map approaching as much as 10 degrees Celsius (18 degrees Fahrenheit) above normal (deepest reds on the map). Temperatures were similarly extreme in the Arctic Ocean around Svalbard, the Barents Sea, and the Kara Sea. Far eastern Siberia, Alaska, and northwestern North America were significantly colder, while much of Europe and western Russia were warmer than normal (following a much colder February). 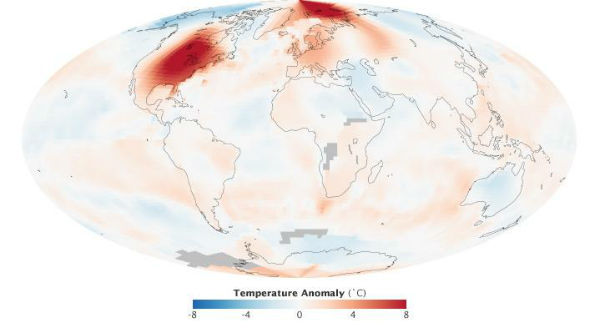 The map above shows global temperature anomalies for March 2012, based on an ongoing analysis by scientists at NASA’s Goddard Institute for Space Studies. It shows changes from the norm for each region, not absolute temperatures.That is, the map depicts how much temperatures rose above or below the average March temperatures for that area compared to the base period of 1951-1980.

According to an analysis by the National Oceanic and Atmospheric Administration, the average March temperature was 10.6 degrees C (51.1 degrees F) for the 48 contiguous states, which was 4.8 degrees C (8.6 degrees F) above the 20th century average for March. Only one month (January 2006) has seen a larger departure from its average temperature than March 2012  in more than 1,400 months that have passed since the U.S. record began. 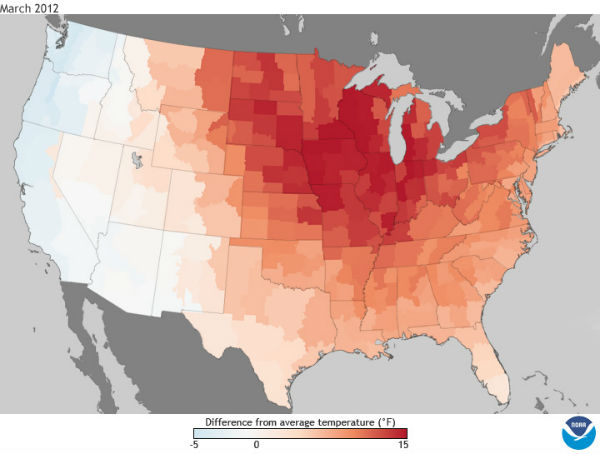 East of the Rocky Mountains, 25 states had their warmest March on record; 15 more states were in their top ten warmest. More than 15,000 temperature records were broken—evenly split between daytime highs and nighttime highs—and there were 21 instances where nighttime low temperatures were warmer than the former daytime records. 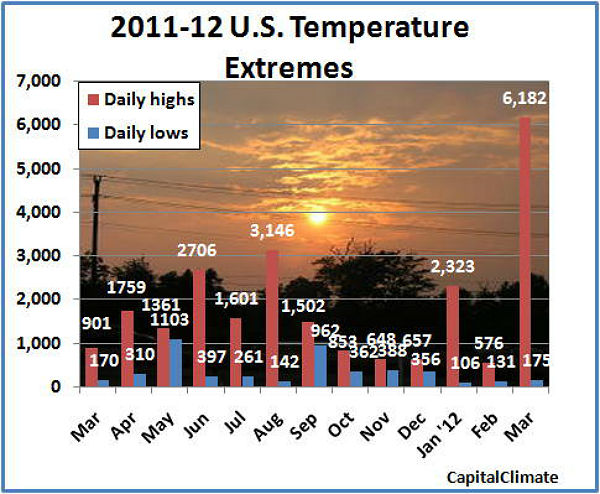 Record and near-record breaking temperatures dominated the warmest March on record for the contiguous United States, a record that dates back to 1895. The average temperature of 51.1 degrees F was 8.6 degrees F above the 20th century average for March and 0.5 degrees F warmer than the previous warmest March in 1910. Of the more than 1,400 months that have passed since the U.S. record began, only one month, January 2006, has seen a larger departure from its average temperature than March 2012. 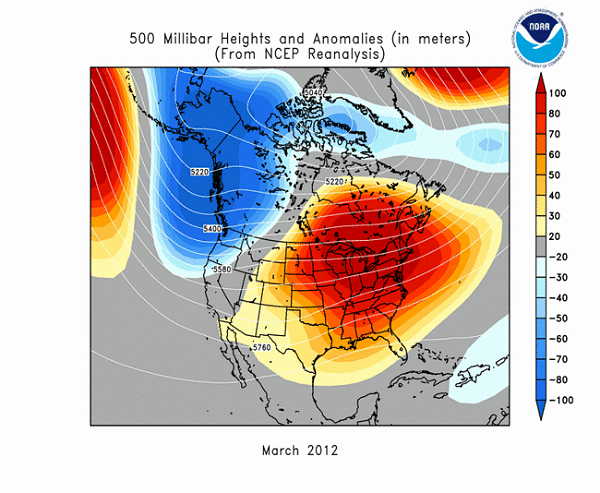 Every state in the nation experienced a record warm daily temperature during March. According to preliminary data, there were 15,272 warm temperature records broken (7,755 daytime records, 7,517 nighttime records). Hundreds of locations across the country broke their all-time March records. There were 21 instances of the nighttime temperatures being as warm, or warmer, than the existing record daytime temperature for a given date. 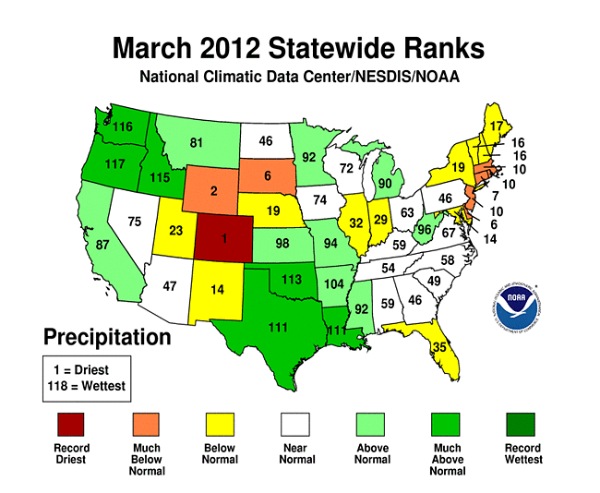 The nationally-averaged precipitation total was 2.73 inches, which is 0.33 inch above average. The Pacific Northwest and the Southern Plains were much wetter than average during March while drier-than-average conditions were observed in the interior West, Northeast, and Florida. Colorado had its driest March on record. 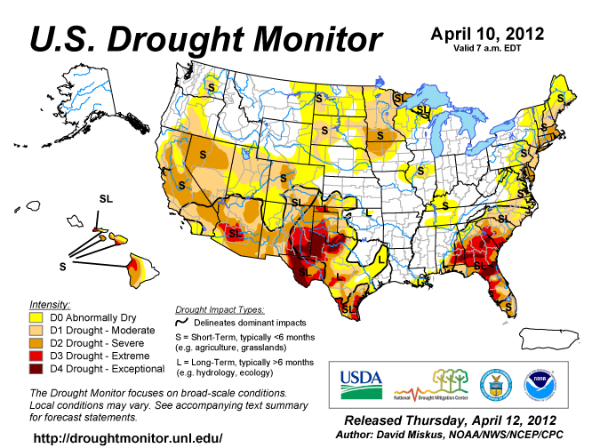 According to the U.S. Drought Monitor, as of April 3rd, 36.8 % of the contiguous U.S. was in drought, a decrease from 38.7 percent at the end of February. Above-average precipitation across the Southern Plains improved long-term drought conditions across Texas, Oklahoma, and Kansas.

The warmer-than-average conditions across the eastern U.S. also created an environment favorable for severe thunderstorms and tornadoes. According to NOAA’s Storm Prediction Center, there were 223 preliminary tornado reports during March, a month that averages 80 tornadoes. The majority of the tornadoes occurred during the March 2-3 outbreak across the Ohio Valley and Southeast, which caused 40 fatalities and damages exceeding 1.5 billion U.S. dollars. 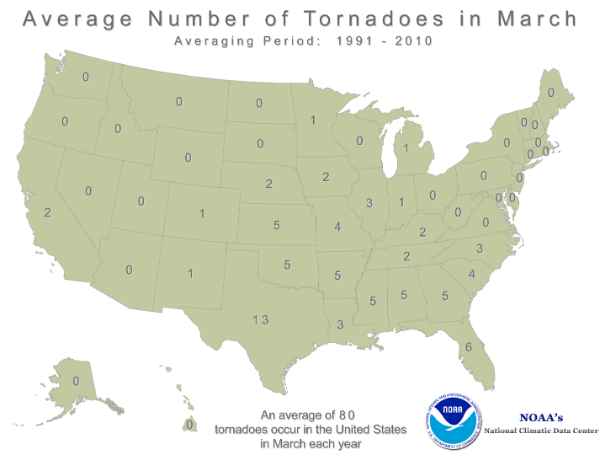 A list of select March temperature and precipitation records can be found here.