Sunspot 1434 located in the southern hemisphere, produced a rapid M1.3 Solar Flare at 20:39 UTC on March 17, 2012. A Type II Sweep Frequency Event with a velocity of 1140 km/s was detected as well. Analysis of the M1.3 flare is ongoing to determine if it was associated with an Earth-directed CME. 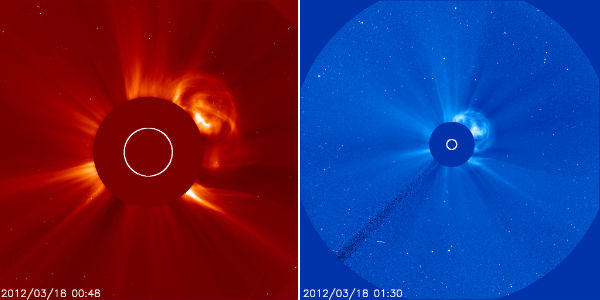 Sunspot 1432 continues to shrink in spot count and sunspot area. Sunspot 1435 on the other hand is growing in the southern hemisphere. There will remain a small chance for moderate solar flares. New Region was numbered today and it got number 1437 . It and the remaining regions are small, magnetically simple, and stable. 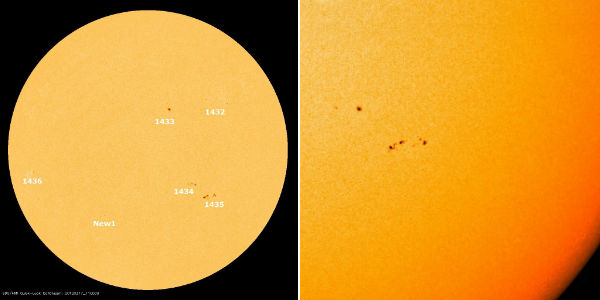 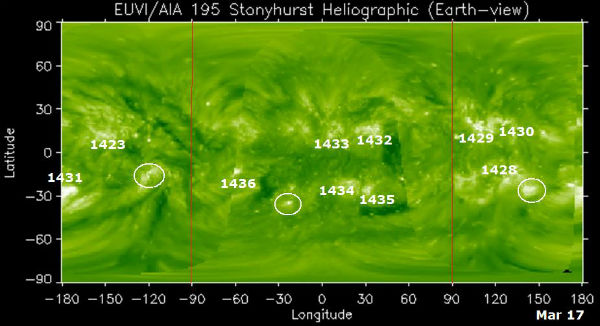 An aurora watch will be in effect for this weekend due to an expected CME impact from a solar flare on March 15. Minor storming will be possible at high latitudes. NOAA forecasters estimate a 20% chance of geomagnetic storms around the poles in response to a high-speed solar wind stream buffeting Earth’s magnetic field. 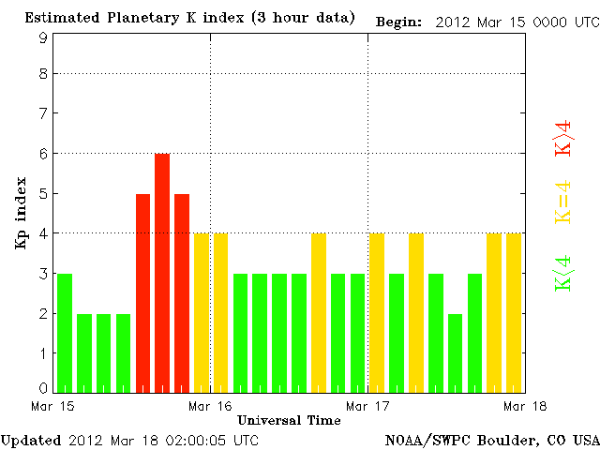 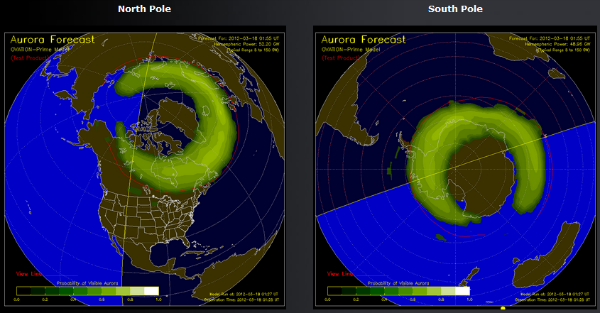 Solar activity was moderate. Region 1435 (S26W37) grew rapidly overnight ending the period as a Dro type group with beta magnetic characteristics. Nearby Region 1434 (S22W27) produced an impulsive M1/Sf flare at 17/2039Z. This flare was accompanied by a Type II radio sweep (1140 km/s). A northward directed wave was visible in SDO/AIA 193 imagery. Region 1432 (N14W39), currently a Cro type group with beta magnetic characteristics, produced a C1 flare at 17/0312, but was generally quiet overnight. New Region 1437 (S34E15) was numbered today. It and the remaining regions were small, magnetically simple, and stable. Solar activity is expected to be low with a chance for an isolated M-class flare all three days (18-20 March), particularly from the vicinity of Regions 1434 and 1435.

Geomagnetic field activity ranged from quiet to active levels with isolated minor to major storm levels observed at high latitudes. This activity was in response to the continued presence of a high speed solar wind stream. Solar wind speed, measured at the ACE spacecraft, remained around 650 km/s while Bz ranged between +5 and -5 nT. The greater than 2 MeV electron flux at geosynchronous orbit reached high levels during the period.

Geomagnetic field activity is expected to begin at unsettled levels and increase to active to isolated minor storm levels on Day 1 (18 March) as a CME from 15 March arrives. Activity levels are expected to be predominantlyactive on Day 2 (19 March), declining to unsettled levels on Day 3 (20 March) as effects from the CME subside. Analysis of the M1/Sf flare is ongoing to determine if it was associated with an Earth-directed CME.