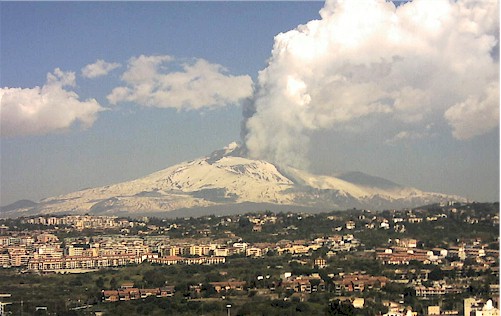 17 volcanoes have shown changes in activity last week. New unusual activity has been noticed around 5 volcanoes (below).

KVERT reported that during 24 February-2 March seismic activity at Bezymianny remained elevated, with about 7-19 weak events registered daily. A thermal anomaly was detected in satellite images. Gas-and-steam activity was observed on 26 February; clouds obscured the volcano on the other days. One short volcanic tremor episode was detected on 29 February. About 40 seismic events were detected on 1 March and, according to satellite data analysis, the size and brightness of a thermal anomaly abruptly increased on 2 March. The Aviation Color Code was raised to Red. During 2-5 March there were 25-40 weak seismic events detected; cloud cover prevented observations of the volcano.

AVO reported that during 24 February-2 March satellite images of Cleveland revealed no unusual activity and no significant changes in the size of the lava dome. A weak thermal anomaly was detected in satellite imagery on 3 March. The Volcano Alert Level remained at Watch and the Aviation Color Code remained at Orange. No current seismic information was available because Cleveland does not have a real-time seismic network.

Sezione di Catania – Osservatorio Etneo reported that the third episode of lava fountaining from Etna’s New Southeast Crater (New SEC) occurred on the morning of 4 March and was more explosive than the preceding episode. The beginning of the eruption was characterized by a rapid increase in volcanic tremor amplitude coincident with Strombolian explosions that increased in intensity and frequency. Just after 08:00 lava overflowed the deep breach in the SE rim of the crater and reached the SE base of the cone within 15 minutes, then advanced towards the W rim of the Valle del Bove. Explosive activity changed to continuous lava fountaining and an eruption plume developed at about 0830. Large pyroclasts fell on the steep flanks of the cone, causing avalanches.

At about 08:50 small pyroclastic flows generated by the partial collapse of the eruption column mainly descended the NE flank, and somewhat down the S flank. A lava flow was emitted from a new eruptive vent on the upper SW flank of the New SEC cone and descended into the saddle between the old and new SEC cones. The lava interacted with snow, causing powerful explosions and small pyroclastic flows. These phreatic explosions generated jets of vapor and launched rock fragments to distances of several tens of meters. A lahar developed which traveled toward the “Belvedere” monitoring station, on the W rim of the Valle del Bove, and passed a few tens of meters to the N of the monitoring instruments.

A lava flow also issued from an eruptive fissure on the upper N flank of the cone and descended a few hundred meters to the NE, surrounding the N base of the cone. After descending the steep W slope of the Valle del Bove, the flow split into several branches on the more gently sloping terrain. These branches exceeded in length those of 9 February, reaching a total distance of about 3.5 km from the crater. Shortly after 1000, the activity started to diminish; lava fountaining ceased at 1032, two hours after the onset of the paroxysmal phase. The lava flow emitted from the fissure on the SW flank of the cone continued advancing for a few hours after the cessation of the activity.

The eruption column rose several kilometers above the summit of Etna. Ash and lapilli were carried NE by the wind, affecting the areas around Piedimonte, Etneo, and Taormina. Fine ash fell as far as the Messina area and southern Calabria. Again, the pyroclastic cone of the New SEC had grown in height, mainly on its N rim. Checkout Etna WebCams here.

AVO reported that the level of unrest at Kanaga declined to background levels. On 2 March the Volcano Alert Level was lowered to Normal and the Aviation Color Code was lowered to Green.

Ongoing activity was noted among the following volcanoes :