The Moderate Resolution Imaging Spectroradiometer (MODIS) on NASA’s Terra and Aqua satellites observed the intensification of a dust storm in the eastern Sahara Desert on February 25, 2012.  Multiple dust plumes arise from discrete source points—one such point is near the top edge of the image—and blow southward. Fine sediments from ephemeral rivers and sand seas all provide material for dust storms in this region. The hot, dry environment ensures that such storms rank among Sudan’s most common natural hazards. 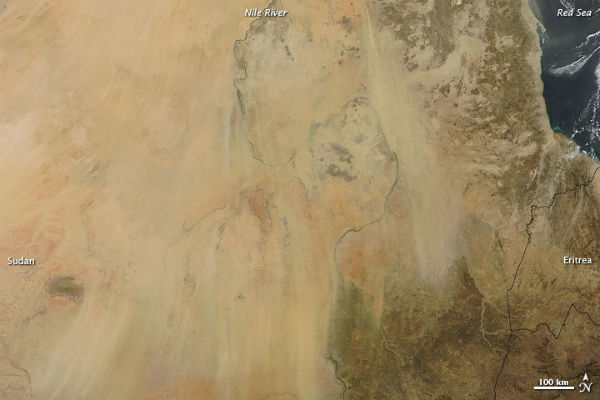 The Nile River snakes its way northward through Sudan, taking a big loop to the east before curving back to the west. The river remains discernible throughout its eastern loop in the morning, but by the afternoon, dust has obscured much of that area. Dust over the Red Sea also increases in the afternoon, although skies in the west appear somewhat clearer. (EarthObservatory)

Delhi shivers through coldest October and November in more than 50 years, India

Heavy rains during the past few days have flooded Vietnam's central and central highland regions, leaving at least five people dead and more than 5 600 displaced. Between November 28 and December 1, up to 986 mm (39 inches) of rain has been recorded, according...

Six people went missing after a massive landslide, among many other smaller ones, hit the community of Haines in southeast Alaska following heavy rains, the Alaska State Troopers reported Wednesday, December 2, 2020. Up to 3 m (9 feet) of debris engulfed the area,...

Noctilucent clouds (NLCs) over the South Pole are missing this year

Noctilucent clouds (NLCs) over the South Pole are missing this year, but consider it only the tip of the iceberg, Dr. Tony Phillips of the SpaceWeather said. Missing NLCs is just one of the curious weather patterns currently underway at the southern end of our...

A bright daylight fireball exploded over northern New York, U.S. at 17:10 UTC on December 2, 2020, creating a bright flash in the middle of the day. Witnesses from parts of upstate New York said the visual event was followed by a sonic boom. The American Meteor...

Tropical Cyclone "Burevi" made landfall over northern Sri Lanka late December 2, 2020 (LT) with maximum sustained winds up to 90 km/h (55 mph) and heavy rain. This the 5th named storm of the 2020 North Indian Ocean cyclone season and the second to form in...

After a few months of low-level activity, a strong explosion took place at Japan's Sakurajima volcano at 02:55 UTC on December 2, 2020. Part of the eruptive column was obscured by a meteorological cloud, making height estimate difficult. Finally saw some...

A significant eruption occurred at the Indonesian Semeru volcano on December 1, 2020, generating a large pyroclastic flow and forcing thousands of residents to flee their homes. According to the CVGHM, the volcano has now entered the stage of generating frequent...

Take a look at the sublime display of Etna's natural fireworks, with its Southeast Crater now erupting from two vents simultaneously. This video was recorded by INGV's Boris Behncke from Tremestieri Etnao on the southern side of Etna at daybreak on December...

At least 50 explosions in 9 hours at Telica volcano, Nicaragua

An uptick in activity has been observed at the Nicaraguan Telica volcano on Monday, November 30, 2020, with low-level ash emission and dozens of explosions at regular rates. Ashfall was reported in nearby communities, including El Panal, Cristo Rey, Los Cocos, and...

Tropical Cyclone "Burevi" formed on December 1, 2020, in the Bay of Bengal as the 5th named storm of the 2020 North Indian Ocean cyclone season. The cyclone is forecast to continue intensifying before it makes landfall in northern Sri Lanka on December 2...

About half the population of southern Madagascar or 1.5 million people is suffering from drought-driven hunger, the UN World Food Program (WFP) reported on November 30, 2020. Three straight years of drought have eradicated harvests and hampered people's access...

Thousands of homes have been damaged and more than 26 000 people affected by severe floods in the Serdang Bedagai Regency of North Sumatra, Indonesia over the past couple of weeks. Floods in the region began mid-November and worsened on November 23. The worst...

A powerful storm swept through the U.S. East Coast on Monday, November 30, 2020, leaving more than 230 000 customers without power in the region. The storm system brought damaging winds and heavy rains, downing multiple trees and power lines and producing several...