Chile’s Puyehue-Cordón Caulle volcano continues to produce large amounts of ash almost six months after its initial explosive eruption on June 4, 2011. According to the Smithsonian Global Volcanism Program, plumes were observed rising 2.3 to 2.5 kilometers above the crater on November 26 – 27. The ash affected air travel, with flights out of Uruguay disrupted or cancelled during that time. 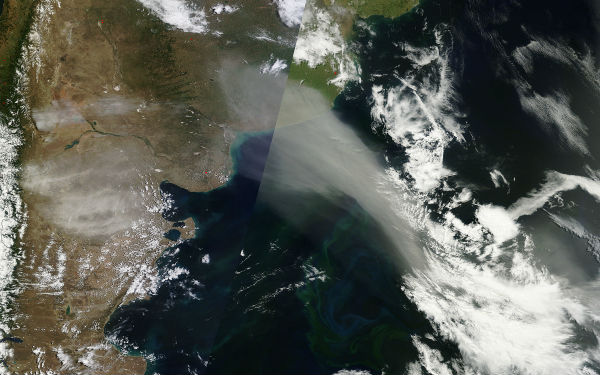 The plume can be seen rising in the west in the Andes Mountain and extends far to the east, off the right side of the image. The ash cover is so thick that it obscures the detail of parts of the land of Argentina and hides the blue ocean waters in a long swath. Under the plume, a large and brilliantly colored phytoplankton bloom can be seen. Phytoplankton are small marine organisms which respond to favorable conditions (the right water temperature, sunlight and nutrients) with explosive growth. It is likely that the volcanic ash is encouraging the massive bloom by depositing iron, a nutrient for phytoplankton, into the to the ocean water. (MODIS)

The Volcano Observatory of the Southern Andes (OVDAS) and National Service of Geology and Mining (SERNAGEOMIN) - reports Puyehue-Cordón Caulle activity in the last 24 hours. The volcanic alert level is red: minor eruption. Eruptive process was of low intensity and stable trend. The dangers listed in the current volcanic warning levels are reduced to fine ash falls that can cause some problems in air traffic, depending on the movement of winds aloft. The analysis of seismic activity reveals that the eruptive process continues at Puyehue-Cordón Caulle with low intensity and low emissions of particulate matter. The possibilities of explosive events remain low due to obstructions by lava flow and changes in the dynamics of the eruption. (SERNAGEOMIN)