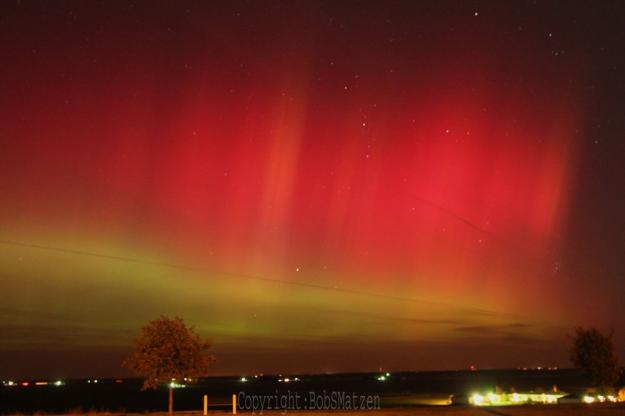 Many observers, especially in the deep south, commented on the pure red color of the lights they saw. These rare all-red auroras sometimes appear during intense geomagnetic storms. They occur some 300 to 500 km above Earth’s surface and are not yet fully understood.

The storm is subsiding now. Nevertheless, high-latitude sky watchers should remain alert for auroras as Earth’s magnetic field continues to reverberate from the CME impact. (SpaceWeather)

According to analysts at the Goddard Space Weather Lab, the impact caused a strong compression of Earth’s magnetic field, allowing solar wind to penetrate all the way down to geosynchronous orbit for a brief period between 19:06 UT and 19:11 UT. Earth-orbiting spacecraft could have been directly exposed to solar wind plasma during that time.

High-latitude sky watchers should remain alert for auroras as Earth’s magnetic field continues to reverberate from the CME impact. The best time to look is usually during the hours around local midnight. 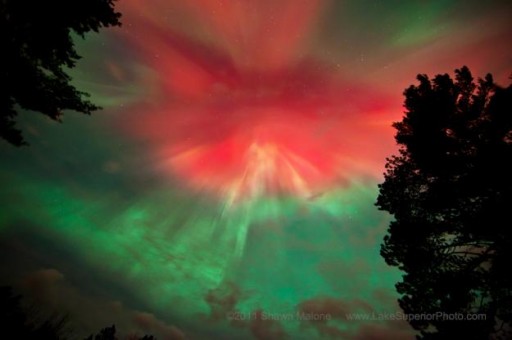 Solar Activity Forecast: Solar activity is expected to be low with a slight chance for isolated M-class activity. Regions 1324 (N12W13) and 1330 (N08E45) are the most likely for moderate level activity.

Geophysical Activity Forecast: The geomagnetic field is expected to be at quiet to unsettled levels, with isolated active periods on day one (25 October), due to lingering effects of the 24 October CME passage. By day two (26 October), the field is expected to mostly quiet with isolated unsettled periods returning to mostly quiet on day three (27 October).

Strong geomagnetic storming reaching close to the G3 Level took place at high latitudes. Visible Aurorais also being seen in many locations in the upper parts of the United States and Canada. I was lucky enough to capture this event in my backyard and I have shared some images below.

VHF Aurora: Strong Aurora signals have been spotted and heard on both 6m and 2m here in the northern parts of North America. For a few hours, the magic band (6m) was sounding more like 20m… except all the signals had the aurora tone. (SolarHam) 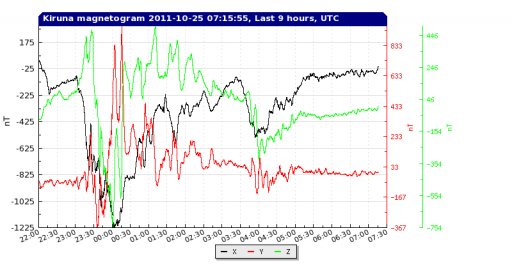 The Coronal Mass Ejection observed Saturday morning arrived earlier today (Monday, EDT and GMT), about 8 hours earlier than model guidance suggested.  Significant space weather is not expected.  Early phases of the event have reached the G1 level, but that should be close to the peak level seen in this event. (SWPC)

A coronal mass ejection (CME) struck Earth’s magnetic field today, Oct. 24th, at approximately 1800 UT (02:00 pm EDT) setting the stage for a possible geomagnetic storm. Analysts at the Goddard Space Weather Lab say the CME impact caused a strong compression of Earth’s magnetic field, allowing the solar wind to penetrate all the way down to geosyncronous orbit for a brief period between 19:06 UT and 19:11 UT. Earth-orbiting spacecraft could have been directly exposed to solar wind plasma during that time. (SpaceWeather)

Strong ground currents have been detected in Norway. 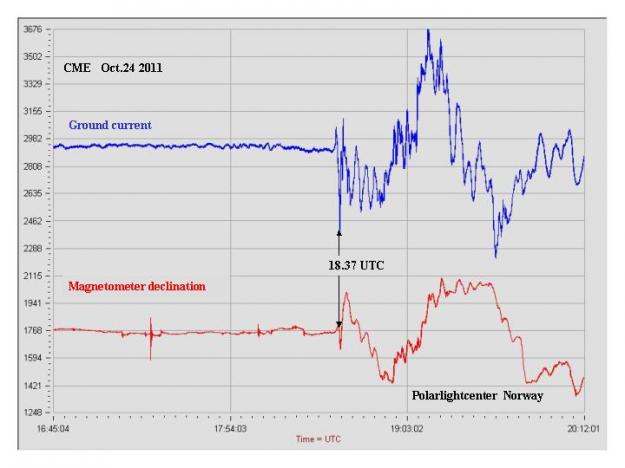 The Sun is trying, but it’s only managing to throw some weak stuff Earth’s way.  One coronal mass ejection (CME) off the Sun’s west limb on Saturday Oct 22 (EDT and GMT) caused a small increase in high energy protons at Earth, just enough to cross the S1 threshold for a short period of time.  Another CME looks like it’s going to brush by Earth on Tuesday (EDT and GMT), giving us at best very weak geomagnetic storm activity, not expected to hit even the G1 level.  You can see the results of the WSA-Enlil model run for the CME that’s going to brush by Earth here.  Moderate solar flare activity is possible for the next few days. (SWPC Report 2011-10-24, 14:26) 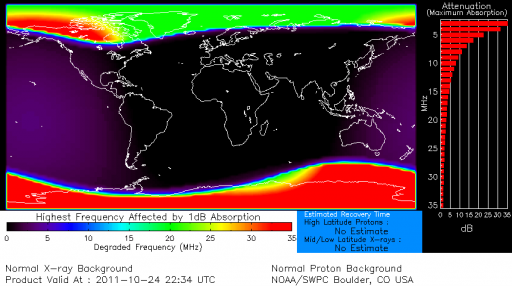 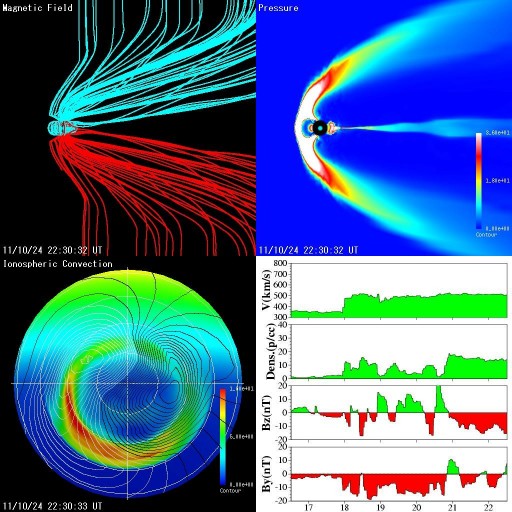