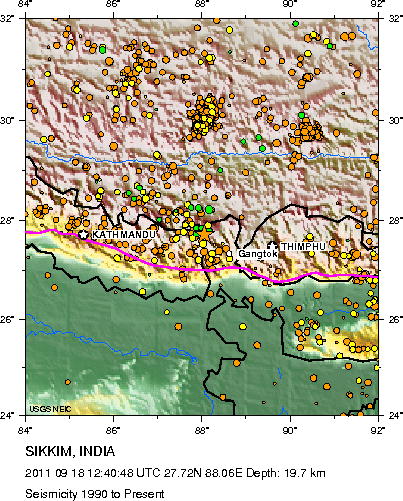 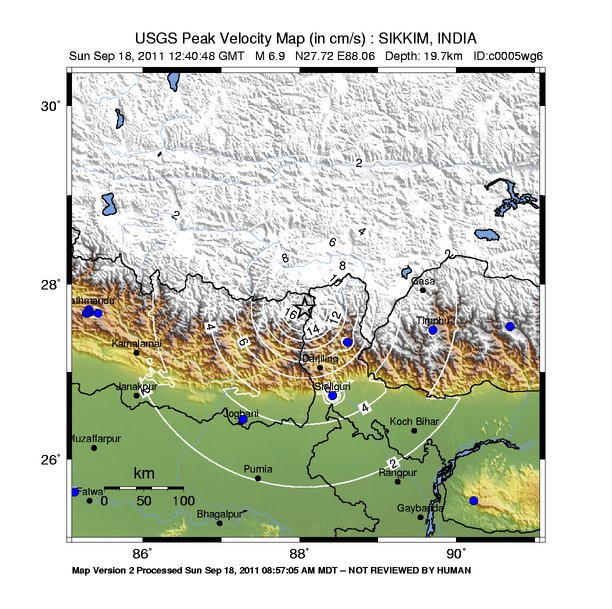 Spokesperson at Metropolitan Police Division SSP Madhav Kumar Nepal said, 24 persons were injured in the collapses caused by the earthquake in Kathmandu Valley alone. Likewise, two inmates were injured in a stampede at Bhadragol jail in Dillibazaar, Kathmandu, following the tremors. The roof of jail is said to have cracked in the tremor. Government spokesman Shrestha called on all the government bodies and social institutions to immediately collect the details of the damage and loss of lives and take to rescue operations. Damage is widespread in the epicentral area and it will be days before the true extent of the damage becomes apparent. 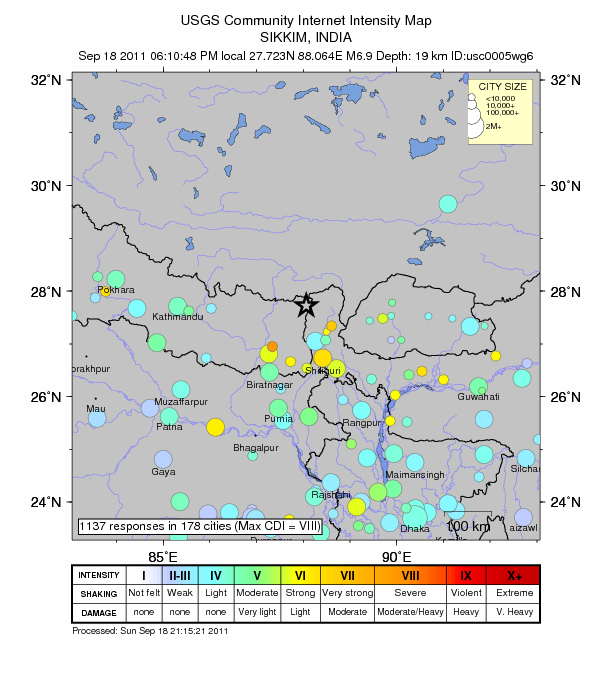 Damage is being reported from Gangtkok, Shiliguri, Jalpaiguri, Kalimpong and Darjeeling. Extensive damage in northern Sikkim including landslides. Power supply and telecommunications have been very badly hit in Sikkim. The British embassy in Kathmandu, located in the Lainchaur area close to the Indian embassy, collapsed after the quake, smashing a car and killing three people inside. Over 100 people have been injured.  Earthquake well felt in every part of Nepal. In Solukhumbu district, there have been 7 people injured in Sankhuwasabha, Nepal while people came running out of their home after the tremor was felt. Ranigunj Durbar of Parsa district in Nepal also had problems due to the tremor.

The updated version of the estimate from USGS has changed the hypocenter to 19km depth and Mw6.9. PAGER has also changed the model from 1 fatality to between 10-100 fatalities which is more inline with the data from WAPMERR. The economic estimate has been changed to $100 million USD expected. These are just models and are not reality!.

The earthquake has of course has been changed to CATDAT Red. Aftershocks of 6.1 and 5.3 have occurred. Regional TV station NewsLive reported that 10 to 12 buildings collapsed in Sikkim’s state capital of Gangtok. Earthquakes in 1973, 1980, 2006 and 2007 have caused damage and fatalities near Sikkim, India in CATDAT. However, these earthquakes have had magnitudes much lower. The last earthquake in 2007 caused 2 fatalities near where the earthquake occurred today. 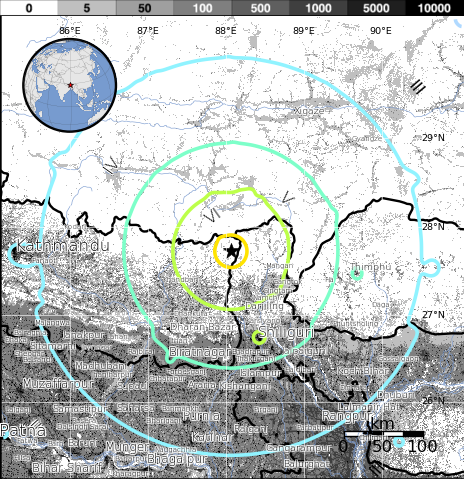 I Have Felt It Reports

The September 18, 2011 Sikkim, India earthquake occurred near the boundary between the India and Eurasia plates, in the mountainous region of northeast India near the Nepalese boarder. Initial analyses suggest the earthquake was complex, likely a result of two events occurring close together in time at depths of approximately 20 km beneath the Earth’s surface. At the latitude of the September 18 earthquake, the India plate converges with Eurasia at a rate of approximately 46 mm/yr towards the north-northeast. The broad convergence between these two plates has resulted in the uplift of the Himalayas, the world’s tallest mountain range. The preliminary focal mechanism of the earthquake suggests strike slip faulting, and thus an intraplate source within the upper Eurasian plate or the underlying India plate, rather than occurring on the thrust interface plate boundary between the two.

This region has experienced relatively moderate seismicity in the past, with 18 earthquakes of M 5 or greater over the past 35 years within 100 km of the epicenter of the September 18 event. The largest of these was a M 6.1 earthquake in November of 1980, 75 km to the southeast. (USGS)