Floods along the Brahmaputra River and its tributaries

Floods along the Brahmaputra River and its tributaries affected residents of eastern India and Bangladesh in late August 2011. The Times of India reported that sudden swelling of Brahmaputra tributaries inundated villages and left thousands homeless in Assam.

The Moderate Resolution Imaging Spectroradiometer (MODIS) on NASA’s Aqua satellite acquired these images on August 20, 2011 (top), and May 28, 2011 (bottom). Both images use a combination of visible and infrared light to increase contrast between water and land. Vegetation is green and clouds are pale blue-green. Water appears in varying shades of blue, and it is silvery blue where sunlight reflects off the water surface. 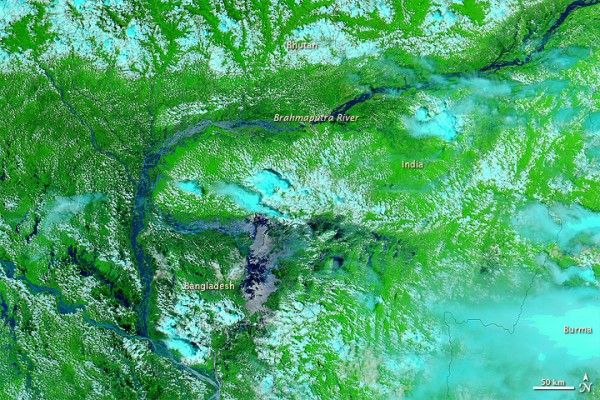 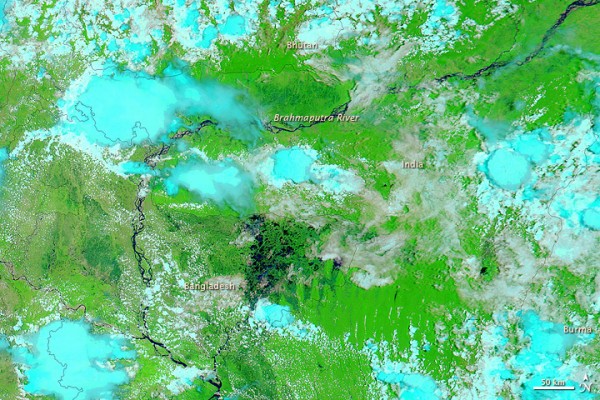 Rainy season in this part of the world typically begins in June. The image from late May shows the region before heavy rains have begun. The image from late August shows a transformed landscape. The Brahmaputra River flows through braided channels in eastern India and Bangladesh. By late August, water in the channels has merged, especially in Bangladesh. Meanwhile, in eastern India (image upper right), tributaries to the Brahmaputra have swelled conspicuously. (EarthObservatory)

The sudden swelling of four tributaries of Brahmaputra in Dhemaji had inundated about 80 per cent areas in the district on Tuesday. The flood waters submerged hundreds of villages in the district leaving thousands of families homeless. Many families trapped by the flood waters in several areas were later rescued byAarmy personnel. A helicopter was also used in the rescue operations to save the trapped families. (TimesOfIndia) 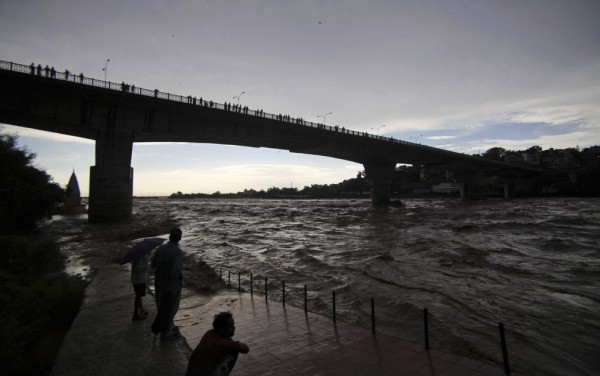 Tens of thousands of people have been displaced in India's West Bengal state after heavy rains overwhelmed rivers and flooded 15 districts. The state government says at least 11 people have died since Friday from flood-related causes, including drowning and injury from collapsed homes. A total of 47 people have died in such accidents since the monsoon season began weeks ago in the eastern Indian state.

The government said in a statement Saturday that rivers were still flowing at extremely dangerous levels after local dams were forced to release some of their catchment. More than 67,000 people are sheltering in 413 relief camps. Vast swaths of farmland have been inundated. (DailyStar)