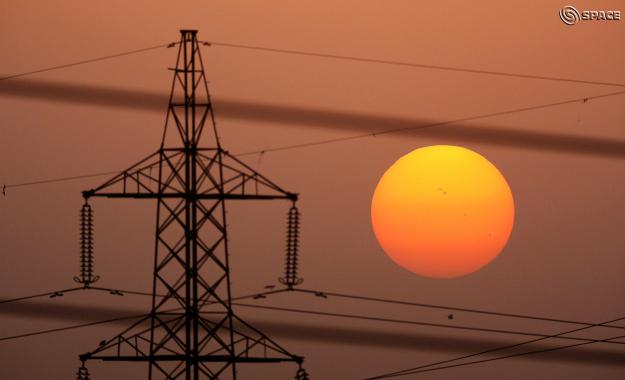 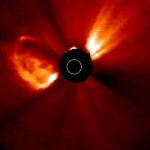 A long duration M1.4 Solar Flare took place around Sunspot 1261 at 06:19 UTC early Tuesday and also blasted a small and earth directed Full-Halo Coronal Mass Ejection (CMEs) into space. There will be a chance for minor geomagnetic storming within 72 hours.

Sunspots 1261 and 1263 continue to produce C-Class flares and there will remain the chance for an M-Class flare. Sunspot 1261 which is in prime position for possible earth directed Coronal Mass Ejections (CMEs), continues to grow in magnetic complexity and it could be only just a matter of time before a moderate to strong Solar Flare takes place. (SolarHam)

The magnetic field of sunspot 1263 harbors energy for powerful X-class solar flares. Because the sunspot is turning to face Earth, any such eruptions in the days ahead would likely be geo-effective. 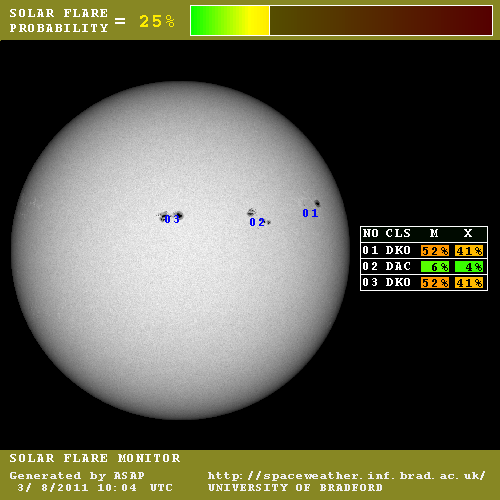 Geophysical Activity Forecast:The geomagnetic field is expected to be quiet on day one (03 August). Day two is expected to be predominately quiet with chance a for isolated active conditions late in the day. Day three (05 August) is expected to be unsettled to active with a chance for minor storm conditions. The increase in activity is forecast due to the expected arrival of the coronal mass ejection from 02/0616Z. Due to the enhanced environment there is a chance for the 10 MeV protons to cross event thresholds with shock arrival. 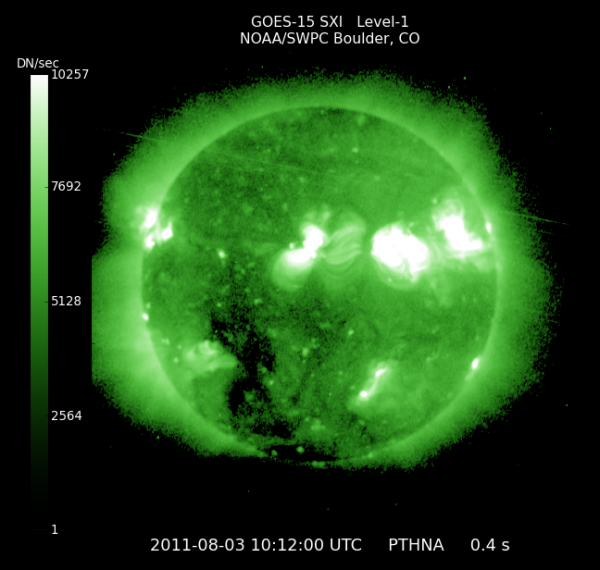 Sergey Gaydash, the head of the Center for Space Weather forecasting of the Institute of Terrestrial Magnetism, Ionosphere and Radio Wave Propagation of Russian Academy of Sciences, reported about solar flare, that occurred in the Sun on Tuesday, and will cause a geomagnetic storm on Earth on August 5, 2011. Solar wind is now moving toward Earth and a magnetic storm is expected on Earth on August 5 2011 at 0300 UT.

Since the solar flare was a M1-class, the expected average intensity of the geomagnetic storm, because, as we know, solar flares, depending on the thickness of their X-ray radiation is divided into five major classes: A, B, C, M and X. Minimum class A0 corresponds to the lowest output power, the most power are solar flares of class X, a flare of class C and M correspond to the average output power.

Geomagnetic storms can affect many areas of human activity, is particularly affected radio, navigation of spacecraft, therefore, monitoring of magnetic storms and forecast their occurrence is of great importance at the present time. Since the solar wind is the motion of charged particles, the interaction of the flow of charged particles from Earth’s magnetosphere cause major disturbances of the geomagnetic field, which in turn affects the technological infrastructure on Earth. On our website we have previously reported, that large solar flares have previously led to problems with power supply of individual cities and entire regions and describe individual instances of such negative effects of magnetic storms on the Earth’s technology infrastructure. Also, we have already described the fact of negotiations U.S. President with the Prime Minister of Great Britain, and the parties agreed on a joint controlled shutdown of entire cities and even entire regions of their countries, in the event of a major magnetic storms, caused by solar flares of unusual intensity.  (HainanWel)