Mount Soputan in North Sulawesi province of Indonesia erupted around 6:03 am on Sunday, July 3, 2011 (22:03 UTC on Saturday) but people living in the sparsely populated area have not been evacuated for now.

The nearest village is eight kilometres away on the western side of the volcano, which towers 1 783 metres (5 800 feet) over North Sulawesi province. Soputan, one of Sulawesi's most active volcanoes, last erupted in 2008 with no fatalities recorded. 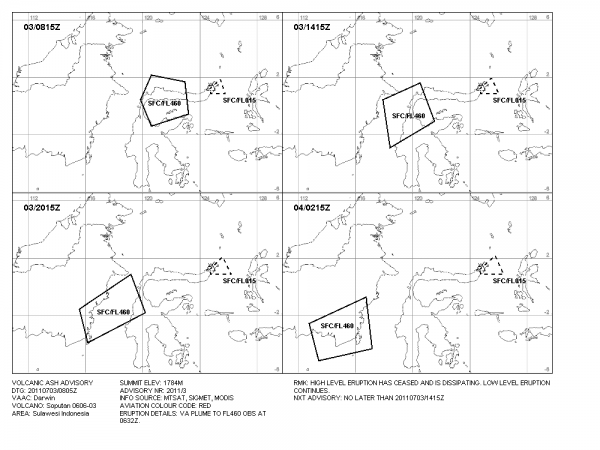 The small Soputan stratovolcano on the southern rim of the Quaternary Tondano caldera on the northern arm of Sulawesi Island is one of Sulawesi's most active volcanoes. The youthful, largely unvegetated volcano rises to 1784 m and is located SW of Sempu volcano. It was constructed at the southern end of a SSW-NNE trending line of vents.

During historical time the locus of eruptions has included both the summit crater and Aeseput, a prominent NE-flank vent that formed in 1906 and was the source of intermittent major lava flows until 1924.