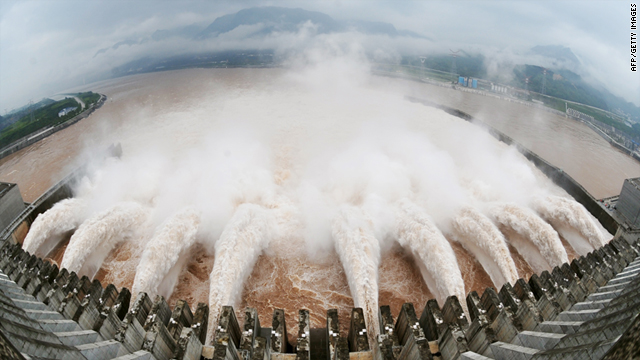 Chinese government has said the Three Gorges Dam – the world’s largest hydropower plant – is having “urgent problems,” warning of environmental, construction and migration “disasters” amid the worst drought to hit southern China in 50 years. China’s State Council, the country’s Cabinet, this week said that while the dam has been beneficial to the region, there has also been a variety of issues since construction began in 1992. At the same time that the Three Gorges Dam project provides huge comprehensive benefits, urgent problems must be resolved regarding the smooth relocation of residents, ecological protection and geological disaster prevention.

This is the first major official acknowledgment of the dam’s repercussions. The Chinese government also admitted the Three Gorges Dam has negatively impacted downstream river water, transport and migration. Completed in 2006, the dam includes a five-tier ship lock, a reservoir, and 26 hydropower turbo-generators. The dam was originally touted for its ability to control the impact of flooding that threatens the Yangtze river delta each summer.

However, millions of Chinese citizens have been adversely impacted throughout the construction process and even after the dam’s completion. The Three Gorges displaced over 1.4 million residents along the Yangtze during the digging and construction of a giant concrete barrier, made up of 16 million tons of concrete. More than 1,000 towns and villages were flooded in the process. Landslides and pollution have plagued the areas near the dam since it was built.

Meanwhile, a prolonged drought has persisted along the Yangtze, affecting nearly 10 million people along the river’s middle and lower sections, in Hunan, Hubei, Jiangxi and Anhui provinces. Citizens in the region are blaming the dam’s restiction on river flow for exacerbating the effects of the drought. These regions will mostly see hot and dry weather during the coming week, the China Meteorological Administration warned.

Meteorological data also indicated that rainfall in drought-affected regions was down 30% to 80% compared to levels in normal years, while the provinces of Anhui, Jiangsu, Hubei, Hunan, Jiangxi, Zhejiang, and the city of Shanghai continue suffering from the worst drought since 1954. Provincial and local departments have been instructed to activate cloud-seeding to induce rainfall if necessary.

“All the discharged water can only reach areas along the Jingjiang section of the Yangtze River, meaning the drought situation in three places in the central part in Hubei… will be relieved to some degree,” said Wang Jingquan, a senior official of the flood control and drought relief office affiliated to the Yangtze River Water Resources Committee.

“The far lower reach of the river can only get very limited benefits,” he said as reported in the state-run China Daily.

“With the current observation devices and data, we have found no evidence that the drought was caused by the dam,” Liu Min, a meteorological specialist with the Hubei Provincial Weather Bureau, told Xinhua. (CNN) 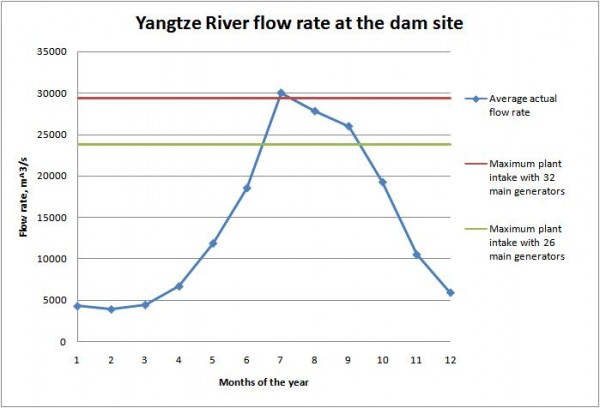 The dam’s water level has dropped two meters from 154 meters since it began releasing water to relieve the ongoing drought in East and Central China, which amounts to about 1.2 billion cubic meters of water, according to Zhao Yunfa, an engineer working at the dam project.

The dam is supposed to store water to a depth of 175 meters when a summer flood is over, and discharge 30 meters of this stored water before the next summer flood, in order to control floods and relieve droughts, said Wang Hai, one of the dam project’s management officials.

However, the dam’s water level is already about 23 meters below 175 meters. Sources said that if it doesn’t rain in the drought-hit areas before the upper reaches of the Yangtze River can get more water, Three Gorges Dam won’t be able to release any more water after June 10, when the level of stored water will drop below the 30-meter mark. (ChinaDaily)

The dam body was completed in 2006. Except for a ship lift, the originally planned components of the project were completed on October 30, 2008, when the 26th turbine in the shore plant began commercial operation. Each turbine has a capacity of 700 MW.  Coupling the dam’s thirty-two main turbines with two smaller generators (50 MW each) to power the plant itself, the total electric generating capacity of the dam will eventually reach 22,500 MW.

As well as producing electricity, the dam supposed to increase the Yangtze River’s shipping capacity, and reduces the potential for floods downstream by providing flood storage space. The Chinese government regards the project as a historic engineering, social and economic success, with the design of state-of-the-art large turbines, and a move toward limiting greenhouse gas emissions. However, the dam flooded archaeological and cultural sites and displaced some 1.3 million people, and is causing significant ecological changes, including an increased risk of landslides. The dam has been a controversial topic both in China and abroad. 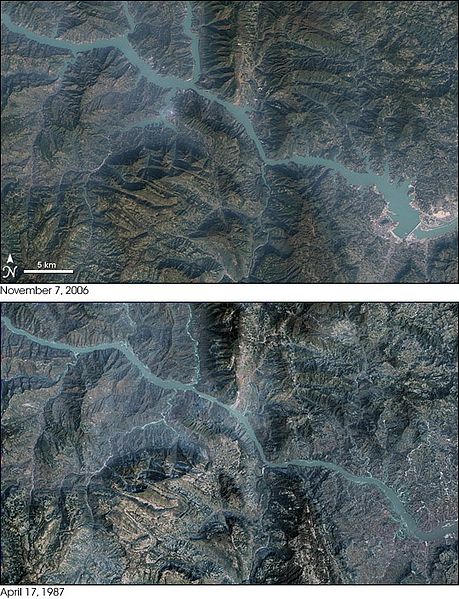 The National People’s Congress approved the dam in 1992. Construction started on December 14, 1994. The dam was expected to be fully operational in 2009, but additional projects such as the underground power plant with six additional generators are expected to delay full operation. The ship lift is expected to be completed in 2014. The dam had raised the water level to 172.5 m (566 ft) above sea level by the end of 2008 and the maximum level of 175 m (574 ft) by October 2010. 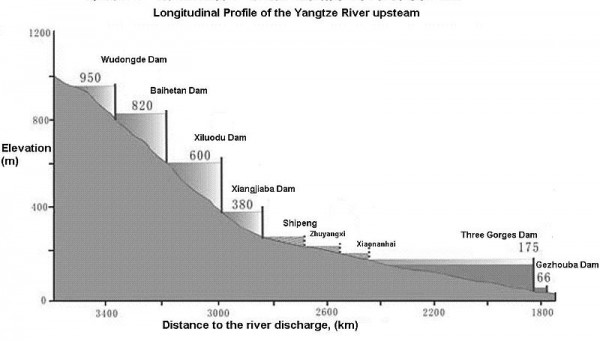 Two hazards are uniquely identified with the dam. One is that sedimentation projections are not agreed upon, and the other is that the dam sits on a seismic fault. At current levels, 80% of the land in the area is experiencing erosion, depositing about 40 million tons of sediment into the Yangtze annually.

The absence of silt downstream has two effects:

Earthquake-induced peak ground acceleration coupled with the immense weight of the reservoir water might be able breach the upstream face of the dam.  Erosion in the reservoir, induced by rising water, causes frequent major landslides that have led to noticeable disturbance in the reservoir surface, including two incidents in May 2009 when 50,000 and 20,000 cubic metres (65,000 and 26,000 cu yd) of material plunged into the flooded Wuxia Gorge of the Wu River. Also, in the first four months of 2010, there were 97 significant landslides. (…)