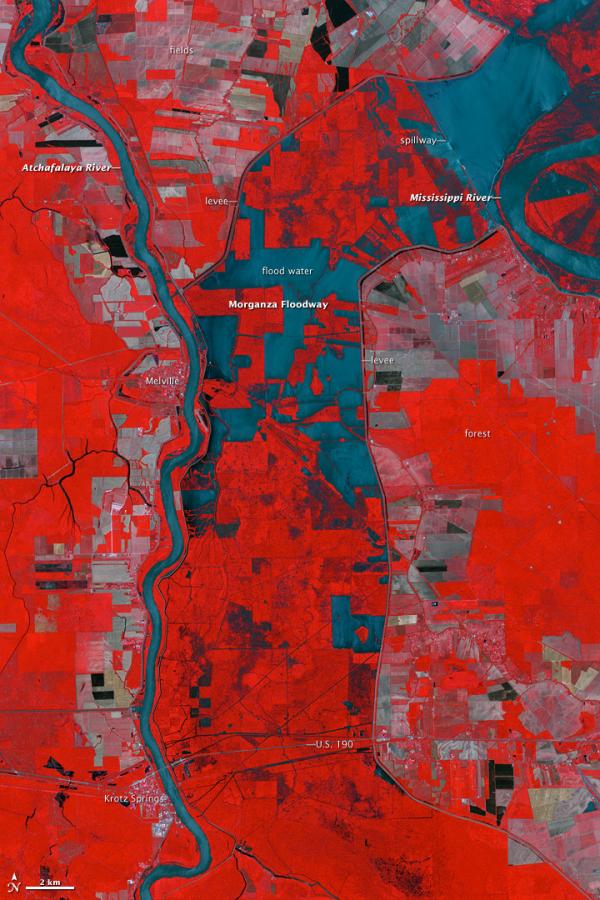 Five days after the U.S. Army Corps of Engineers opened a flood control structure, or spillway, onto the Morganza Floodway, water had spread 15–20 miles (24–32 kilometers) southward across the Louisiana landscape.

The leading edge of the flood water was about 3 miles (4.5 kilometers) below Krotz Springs, between U.S. Route 190 and Interstate 10 (off the bottom of the image), according to Ricky Boyett, a spokesman for the Army Corps. Arrival at the Atchafalaya River is imminent, though the southward flow of water in the floodway has been slower than projections. The region had been suffering through a significant drought, so the ground and side waterways have been able to absorb more water than originally anticipated.

The Advanced Spaceborne Thermal Emission and Reflection Radiometer (ASTER) on NASA’s Terra satellite captured this false-color image of the Morganza Floodway on May 18, 2011. A second large image of the area from April 21, 2007, is attached below the main image.

The false–color images combine infrared, red, and green wavelengths to help distinguish between water and land. Clear water is blue, and sediment-laden water is a dull blue-gray. Vegetation is red; the brighter the red, the more robust the vegetation. Gray patches away from the center of the floodway are likely farm fields that have recently been burned or cleared.

The floodway is bounded by a levee on the east side, and a levee and the Atchafalaya River on the west. The 800,000–acre Atchafalaya Basin is the largest swamp in the United States, according to the U.S. Geological Survey.

Water is expected to reach Morgan City, near the coastal marshes of Louisiana, between May 21–23, according to news reports. (EarthObservatory)