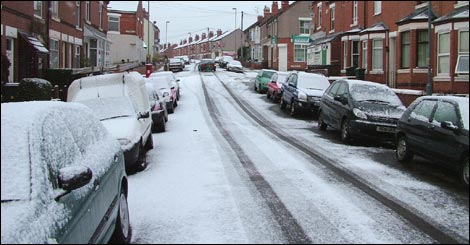 Residents of Melbourne have been swamped with enough rain in the past two weeks to last the month of May and more is yet to come. Other parts of the state have seen their coldest start to May since records began, with snow already falling in low-lying areas. 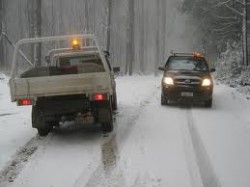 Mt Baw Baw has been blanketed with more than 30cm of fresh snow as eager snowboarders take to the slopes well ahead of the official opening to the ski season. Meanwhile, 2cm of snow fell on Mt Buller on Friday night as children flocked to the mountain for the early falls. And Mt Hotham has seen more than 30cm of snow in the past week.

Snow was falling as low as 700m in an unusally cold start to the snow season. Snow fall at such low levels is unusual for this time of year. Temperatures across the state, particularly in southern Victoria, are not expected to rise much in the coming days.

Melbourne has had more than 55mm of rain since May 1 – more than the total May average – and above-average rainfall is still expected for the rest of the month. (HeraldSun)


La Niña near its end

The 2010−11 La Niña event is nearing its end, with most indicators approaching neutral values. Climate models surveyed by the Bureau of Meteorology suggest that the Pacific Ocean will continue to warm over the coming months, with neutral conditions likely to persist through the austral winter.

Steady warming of the equatorial Pacific Ocean since mid-January has resulted in near-normal ocean temperatures. Atmospheric indicators of La Niña are now responding to these changes in the ocean and an active Madden Julian Oscillation, resulting in a weakening of trade winds, changes in cloudiness and an easing of typical La Niña pressure patterns. Likewise, the Southern Oscillation Index (SOI), which recorded its highest April value since 1904, has dropped from above +25 to +11 in the past fortnight.

The influence of the Indian Ocean Dipole (IOD) on Australian rainfall is currently neutral. A weakly positive IOD event has been forecast to develop during winter. In the past, positive IOD events have been associated with drier conditions over parts of Australia, particularly in the south east, during the winter and spring seasons.

Southern Oscillation Index:
The Southern Oscillation Index (SOI) has fallen sharply over the past two weeks, after recording the second highest April monthly value on record (the highest on record is 31.7, in 1904). The latest (9 May) 30-day SOI value remains positive, at +11. The SOI has been consistently positive since early April 2010.
Sustained positive values of the SOI above +8 may indicate a La Niña event, while sustained negative values below −8 may indicate an El Niño event. Values of between about +8 and −8 generally indicate neutral conditions. 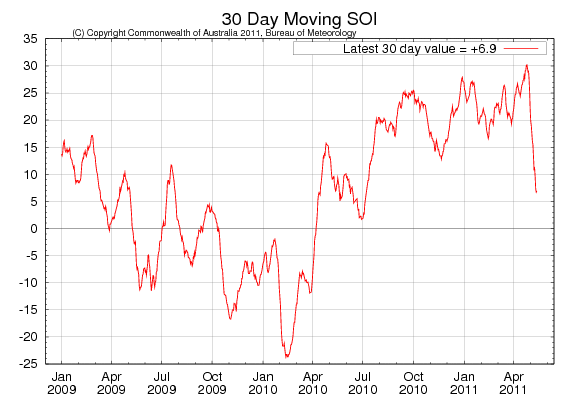