Six earthquakes stronger than magnitude 5 have struck Vanuatu in 24 hours. The unique submarine topography of the region puts it on the front-line for tectonic plate convulsion and potentially destructive tsunamis. The above 1999 map shows the deep trench forming along the plate boundary. Recently, quake activity has increased in both neighboring Fiji and the Solomon Island. The entire region where Vanuatu island group is located is characterized by high volcanic and seismic activity and is part of what is often referred to as the “Pacific Ring of Fire” – an area notorious for frequent earthquakes and volcanic eruptions. This region of the Southwest Pacific Ocean is presently responsible for about ten per cent of the total energy released by earthquakes in the world. In the Vanuatu area, subduction has formed the New Hebrides Trench and is the cause of major earthquakes and locally destructive tsunamis. The tectonic plates move at speeds averaging between 1 cm and 10 cm per year. We can only hope obstructive geological forces for a potential mega-thrust earthquake in this region of the Pacific are not building. (TheExtinctionProtocol) 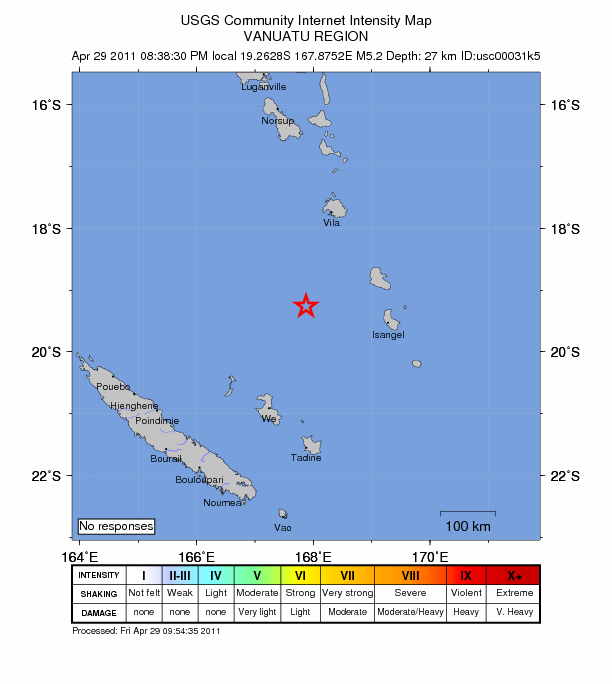 Vanuatu is an island archipelago consisting of approximately 82 relatively small, geologically newer islands of volcanic origin (65 of them inhabited), with about 800 miles (1,300 km) north to south distance between the outermost islands. Two of these islands (Matthew and Hunter) are also claimed by the French overseas department of New Caledonia. Fourteen of Vanuatu's islands have surface areas of more than 100 square kilometres (39 sq mi). The country lies between latitudes 13° and 21°S, and longitudes 166° and 171°E.

From largest to smallest, these are Espiritu Santo, Malakula, Efate, Erromango, Ambrym, Tanna, Pentecost, Epi, Ambae or Aoba,Vanua Lava, Gaua, Maewo, Malo, and Anatom or Aneityum. The nation's largest towns are the capital Port Vila, situated on Efate, andLuganville on Espiritu Santo. The highest point in Vanuatu is Mount Tabwemasana, at 1,879 metres (6,165 ft), on the island of Espiritu Santo.

Vanuatu's total area is (roughly 12,274 square kilometres (4,739 sq mi)) of which its land base is very limited (roughly 4,700 square kilometres (1,800 sq mi)); most of the islands are steep, with unstable soils, and little permanent freshwater. One estimate (2005) is only 9% of land is used for agriculture (7% permanent crops, 2% arable land). The shoreline is usually rocky with fringing reefs and no continental shelf, dropping rapidly into the ocean depths.

There are several active volcanoes in Vanuatu, including Lopevi, as well as several underwater ones. Volcanic activity is common with an ever-present danger of a major eruption; a recent nearby undersea eruption of 6.4 magnitude occurred in November 2008 with no casualties, and an eruption occurred in 1945. Vanuatu is recognised as a distinct terrestrial ecoregion, known as the Vanuatu rain forests. It is part of the Australasia ecozone, which includes New Caledonia, the Solomon Islands, Australia, New Guinea, and New Zealand.

Vanuatu’s growing population (estimated in 2008 at 2.4 percent annually) is placing increased pressure on local resources for agriculture, grazing, hunting, and fishing. Some 90 percent of Ni-Vanuatu households fish and consume fish, which has caused intense fishing pressure near villages and the depletion of near-shore fish species. While well vegetated, most islands also show signs of deforestation. They have been logged (particularly of higher-value timber), subjected to wide-scale slash-and-burn agriculture, converted to coconut plantations and cattle ranches, and show evidence of increased soil erosion and landslides.

Freshwater is becoming increasingly scarce and many upland watersheds are being deforested and degraded. Proper waste disposal and water and air pollution are also increasingly troublesome issues around urban areas and large villages. Additionally, the lack of employment opportunities in industry and urban areas and inaccessibility to markets have combined to lock rural families into a subsistence or self-reliance mode, putting tremendous pressure on local ecosystems. 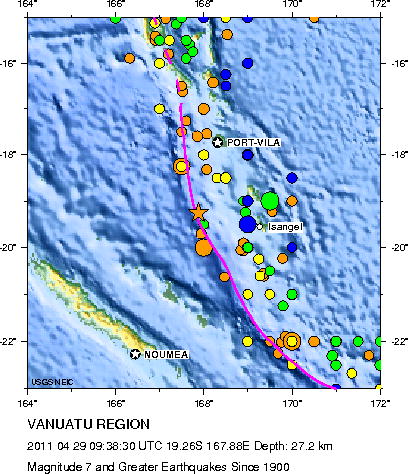 Earthquakes near Vanuatu, October 7–8, 2009. The circle sizes indicate magnitude and the black line shows the plate boundaries.
Several moderate to major earthquakes affected the vicinity of Vanuatu and also of Santa Cruz Islands between October 7 and 8, 2009. The first earthquake struck at 2203 UTC on October 7, 2009 and measured 7.6 Mw. A tsunami warningwas issued for 11 countries throughout the region although this was canceled within two hours after only a minor tsunami formed.

The Vanuatu earthquakes occurred on (or near) the boundary of the Australia Plate and the Pacific Plate, and occurred mostly at a depth of 35 kilometers (22 miles). This boundary region is among the most seismically active areas in the world.

The initial earthquake was re-designated as a foreshock because it was followed by a shock of 7.8 magnitude 15 minutes later in the same area. Moderate aftershocks occurred and those with magnitude 6.0 or higher are listed below (there were a dozen ranging from 5.0 to 5.8 within the 12 hours following the initial event). Shocks with magnitude 7.0 or higher are highlighted in light blue and the main shock of 7.8 is highlighted in dark blue. (Wikipedia)