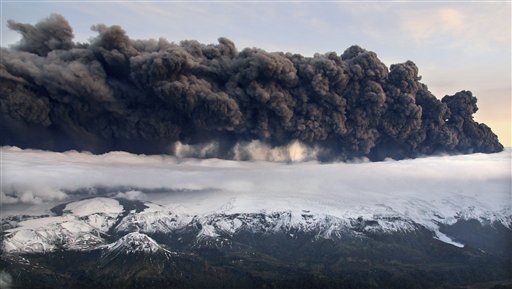 Almost simultaneously with the strong shock that hit Japan and triggered a giant tsunami in the Pacific, two russian Kamchatka volcanoes erupted. Kizimen and Sheveluch eruptions were accompanied by earthquakes. Ash plume rise 7km above crater. According to Russian media reports, the first cloud of dust covered the city of Ust-Kamczatsk. Over five thousand people are forced to stay at home. The authorities have recommended the strict ban on opening windows. The population, however, was not evacuated, and experts say that the dust does not constitute a great danger. (Dziennik) 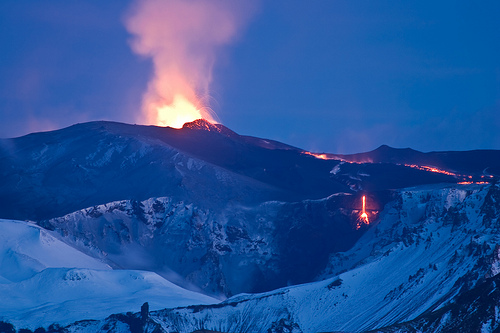 Kizimen and Sheveluch were believed to have erupted shortly after the Japanese quake. Explosions at the volcanoes were accompanied by minor earthquakes. Russian service monitoring the activity of cones, however, ensure that the implemented measures guarantee the safety of residents of neighboring towns. According to Russian media reports, the first cloud of dust covered the city of Ust-Kamczatsk. Over five thousand people are forced to stay at home. The authorities have recommended the strict ban on opening windows. The population, however, was not evacuated, and experts say that the dust does not constitute a great danger. Despite this, from Thursday, all offices of state institutions and organizations have suspended work – except in cases of emergency. For some time, also closed roads in the region. While this eruption does not seem to be a significant threat to the people in Russia, the fact that an earthquake in Japan could have triggered a volcano eruption in Russia does have some significance. (PlanetSave) 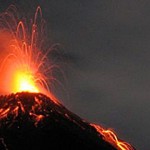 One of Indonesia’s most active volcanos has erupted, sending lava and searing gas clouds tumbling down its slopes. Volcanology official Agus Budianto said Friday that authorities were still trying to evacuate residents living along the slopes of Mount Karangetang. There were no immediate reports of injuries or serious damage. The 5,853-foot (1,784-meter) mountain is located on Siau, part of the Sulawesi island chain. It last erupted in August, killing four people. Indonesia, the world’s largest archipelago, is located on the so-called Pacific “Ring of Fire,” an arc of volcanos and fault lines encircling the Pacific Basin. The eruption happened hours after a massive earthquake in Japan that triggered a Pacific-wide tsunami. Meanwhile, thousands of people are fleeing their homes in northeastern Indonesia after officials warned that a tsunami up to six feet (two meters) high could hit coastal areas following a massive earthquake near Japan. Some jumped in cars and motorcycles and headed to high ground as sirens blared. Others huddled in mosques or were brought to police stations or army barracks. (The Extinction Protocol)

Two volcanoes in Eastern Russia , Kamchatka and one other in Indonesia, have erupted around the same time as the Japan 8.9-magnitude Earthquake on Friday.

Meteorologist Kevin Martin is the lead scientist here at TheWeatherSpace.com and explains in his own way what may actually be happening. 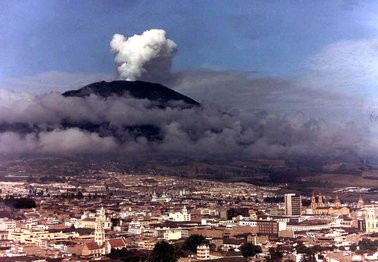 “Waves from the Earthquake have been ringing the planet like bell, causing stress in all sections of the planet”, Martin said. “Imagine a calm magma chamber that just needs one push, even if a few feet. This would be enough to cause instability in the chambers, causing volcanic eruptions in various locations. These three eruptions will not be the only mountains to go and other quakes worldwide will follow as the worldwide faults get disturbed.

Yuri Yamamoto, a resident from Tokyo, tells TheWeatherSpace.com that Japan’s early warning system gave Tokyo 30 seconds of a warning, proving an advanced system may actually work elsewhere and should be implemented in places like the Western Coast of the United States. So it has been interesting to watch history unfolding across the planet, but TheWeatherSpace.com gives our condolences to those lost and the over 88,000 people in Japan that are reported to be missing.

As for the Tsunami Prediction Center, an amazing job from them as predictions were nearly accurate as in timing and strength of the waves. (TheWeatherSpace)

Sakurajima Volcano is situated in South Kyushu, Japan (31 35’N, 130 40E, H=1100m). The lava is andesite and content of SiO2 is 57-66%. The acivity of Sakurajima volcano started approximately 13,000 years ago as a post-caldera volcano on the southern rim of Aira Caldra.

Great eruptions in recording history took place in 1471-1476 (Bunmei era), 1779-1782 (An-ei era) and 1914 (Taisho era). A huge amount of lava flows and pyrocrastic materials were erupted from parasitic craters at both sides of the summit. Lava flows in the 1914 eruption piled up a channel 400m wide and connected the volcano with Osumi Peninsula. Present summit activity began in 1955. More than 7,300 explosive eruptions have been recorded in the past 45 years.