Tectonic earthquakes are being registered beneath the summit area of Ruapehu volcano in New Zealand since December 30, 2021. While these earthquakes are uncommon, none of the monitoring data suggests that the volcano is exhibiting increased levels of activity.

"Earthquakes regularly occur in the Tongariro National Park, and towards the southern portion around Ruapehu, we often record them near Waiouru and National Park Village," GNS Duty Volcanologist Geoff Kilgour noted.1

There are two broad styles of earthquakes at volcanoes: volcanic earthquakes (which includes tremors) that are directly related to the movement of fluids (magma and/or the hydrothermal system), and tectonic earthquakes which result from rocks fracturing (movement on small faults).

From December 30, 2021, GeoNet has recorded a sequence of tectonic earthquakes located beneath Ruapehu’s summit area. So far, there have been at least 30 distinct earthquakes in this sequence.

When compared to historical records, the number of earthquakes with epicenters closely confined to the summit area is unusual.

However, while these earthquake clusters are uncommon, none of the monitoring data suggests that the volcano is exhibiting increased levels of activity. 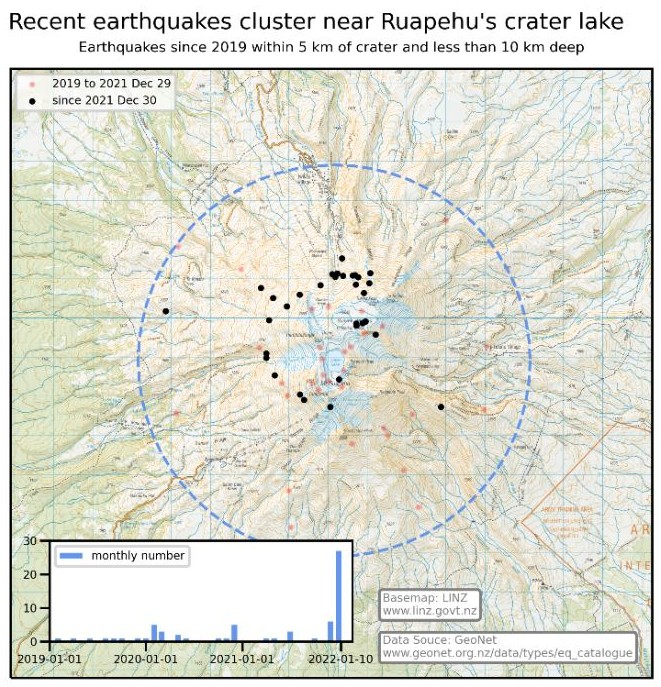 There has been no observable response from other continuous monitoring data such as Crater Lake (Te Wai ā-moe) temperature, lake level, or volcanic tremor.

"Therefore, our current assessment is that a relatively deep stress release has occurred below the volcano, but this has not affected the volcano's hydrothermal system," Kilgour said.

"Our team will be conducting a scheduled gas flight and will sample Ruapehu’s Crater Lake (Te Wai ā-moe) in the coming days, weather permitting."

The Volcanic Alert Level for Ruapehu stays at Level 1, which reflects the current level of volcanic unrest, and the Aviation Colour Code remains at Green.

Kilgor added that Ruapehu is an active volcano with the potential to erupt with little or no warning when in a state of volcanic unrest.

While Volcanic Alert Level 1 is mostly associated with environmental hazards, eruptions can still occur with little or no warning.

Frequent mild-to-moderate explosive eruptions have occurred in historical time from the Crater Lake vent, and tephra characteristics suggest that the crater lake may have formed as early as 3 000 years ago. Lahars produced by phreatic eruptions from the summit crater lake are a hazard to a ski area on the upper flanks and to lower river valleys.2