Snow and blustery conditions are forecast to continue in the Upper Midwest on Friday, November 12, 2021, as a strong low slowly retreats northward. On Saturday and into early Sunday, November 13 into 14, another storm system, known as Alberta clipper, will deliver another round of snow/rain and gusty winds across the northern Plains. By Saturday night, much of Minnesota, Wisconsin, Michigan, Illinois, and northern Indiana will receive snow.

A large and energetic low pressure system that has brought snow and high winds across the northern Plains and upper Midwest will steadily weaken today as it moves across the Great Lakes and then retreats into Canada tonight, NWS forecasters Kong and Zavadoff noted at 08:34 UTC today.1

Nevertheless, very strong and gusty winds on the backside of this system will initially bring blowing snow and reduced visibility over portions of the northern Plains this morning before conditions steadily improve later today.

Meanwhile, persistent onshore flow from a modest atmospheric river will continue to bring moderate to heavy rainfall into portions of the Pacific Northwest. Another 50 to 100 mm (2 – 4 inches) of rain have been forecast for the region over the next 24 hours and rainfall rates over some areas may be as high as 13 – 19 mm (0.5 – 0.75 inches) per hour.

Excessive rainfall will remain to be a concern this morning before the threat of heavy rain diminishes later tonight when the main energy penetrates further inland to support a new low pressure center over Alberta, Canada.

This low pressure system is expected to develop over the northern Plains/upper Midwest Saturday night into early Sunday and deliver another round of snow and gusty winds across the region, with rain showers farther south. 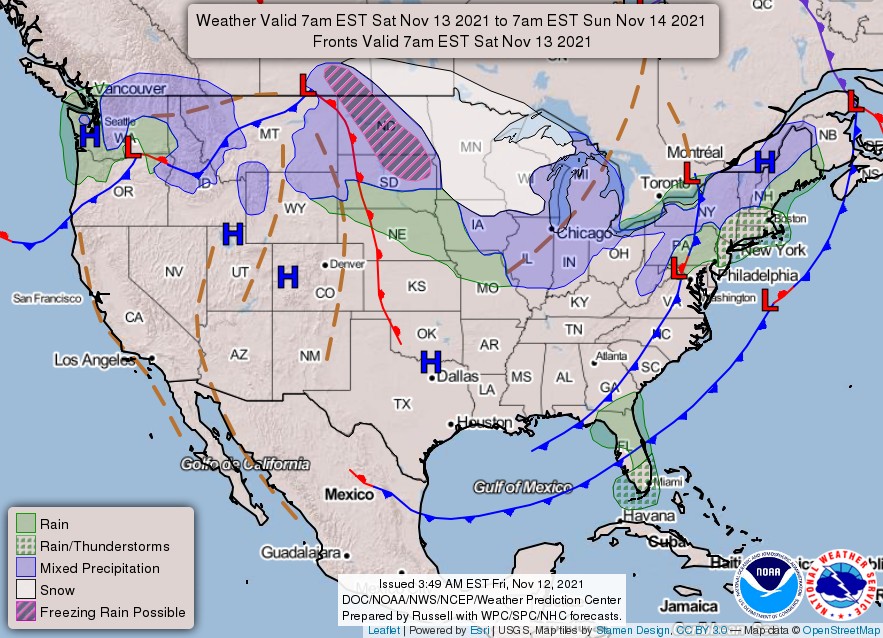 "Cold air will descend from Canada into the North Central states and bring another round of snowfall to the Dakotas, Minnesota, and Great Lakes region this weekend," said AccuWeather Meteorologist Alyssa Smithmyer.2

Alberta clipper will move southeastward through North Dakota and into Minnesota on Saturday. To the north of where the clipper tracks, snow will fall, with a mix of rain and snow to the south.

Most locations are expected to be above freezing, which will limit accumulation. However, cities such as Grand Forks and Fargo, North Dakota are likely to be near or below freezing, and 25 – 75 mm (1 – 3 inches) of snow could fall.

By Saturday night, much of Minnesota, Wisconsin, Michigan, Illinois, and northern Indiana will receive snow. Chicago and Milwaukee and Madison, Wisconsin, have not yet received a flake of snow this season.

Temperature-wise, areas from the central Plains to the mid-Mississippi Valley are expected to drop around 5 – 8 °C (10 to 15 °F) below normal.1

As the Plains warm-up on Saturday with the advancement of a warm front through the region, cooler temperatures are expected to settle into the Tennessee and Ohio Valleys behind the reinforcing cold front, with temperatures sitting 5 to 10 °C (10 to 20 °F) below normal.