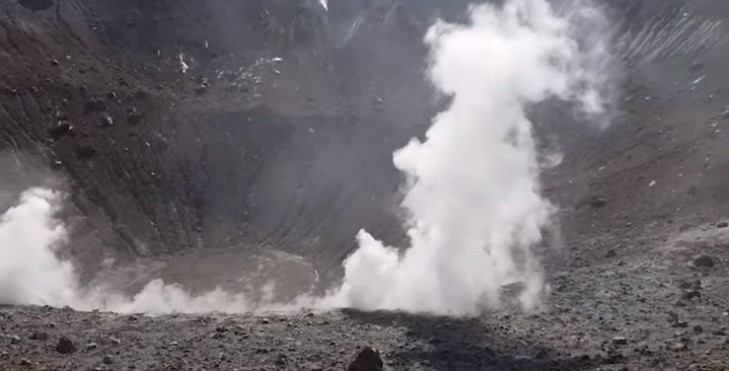 Due to the recent upgrade of alert level for Vulcano volcano in Sicily, Italy from Green to Yellow, researchers of the Palermo Section of the INGV have increased their monitoring of the volcano.

On October 12, they sampled gases at four high-temperature fumaroles on the rim and inner slope of the La Fossa crater, and a low-temperature at the Levante beach.

The samples were handed to the laboratories of the Palermo Section for chemical and isotopic analysis. Concurrently with the sampling, the scientists carried out temperature measurements.

The temperatures of the gas emitted from the fumaroles regularly exceed 100 °C (212 °F) and cannot be measured with normal thermometers. The instrument used (seen in the still image at the beginning of the video) is a type K thermocouple.

Measured values can change with time and vary strongly among the different fumaroles. The fumarole that was measured in this video had a temperature of 344 °C (651 °F).

INGV raised the alert level2 from Green to Yellow on October 1, after their monitoring systems detected changes in geophysical and geochemical signals, in particular those linked to the activity of the hydrothermal system that feeds the fumaroles of the La Fossa crater.

The temperature of the gases emitted by the fumaroles on the crater rim has increased during the summer of 2021 and the composition of the gases shows an increase in CO2 and SO2 (carbon dioxide and sulfur dioxide).

Hydrothermal manifestations of low temperature (100 °C / 212 °F) are instead present in the Faraglioni and Baia di Levante area.

This volcano is located within the Isole Eolie (Aeolian Islands), a UNESCO World Heritage property.3

1 INGV monitoring of the fumaroles at Vulcano – YT