A new eruption has begun at Cumbre Vieja volcano on the island of La Palma, Canary Islands around 14:12 UTC on September 19, 2021. The Alert Level has been raised from Yellow to Red. This is the first eruption at the volcano since 1971 (VEI 2).

The eruption follows an intense seismic swarm at shallow depths which started on September 11. More than 25 000 quakes were registered to September 19.1

Seismicity further increased over the past few hours, with intense surface seismicity between 0 and 6 km (0 – 3.7 miles) and numerous earthquakes felt by the population, IGN said in an update released 12:00 UTC today.2

The accumulated maximum vertical deformation has increased to around 15 cm (5.9 inches) in the area close to the current seismicity and its distribution is still compatible with a center of pressure in this area. 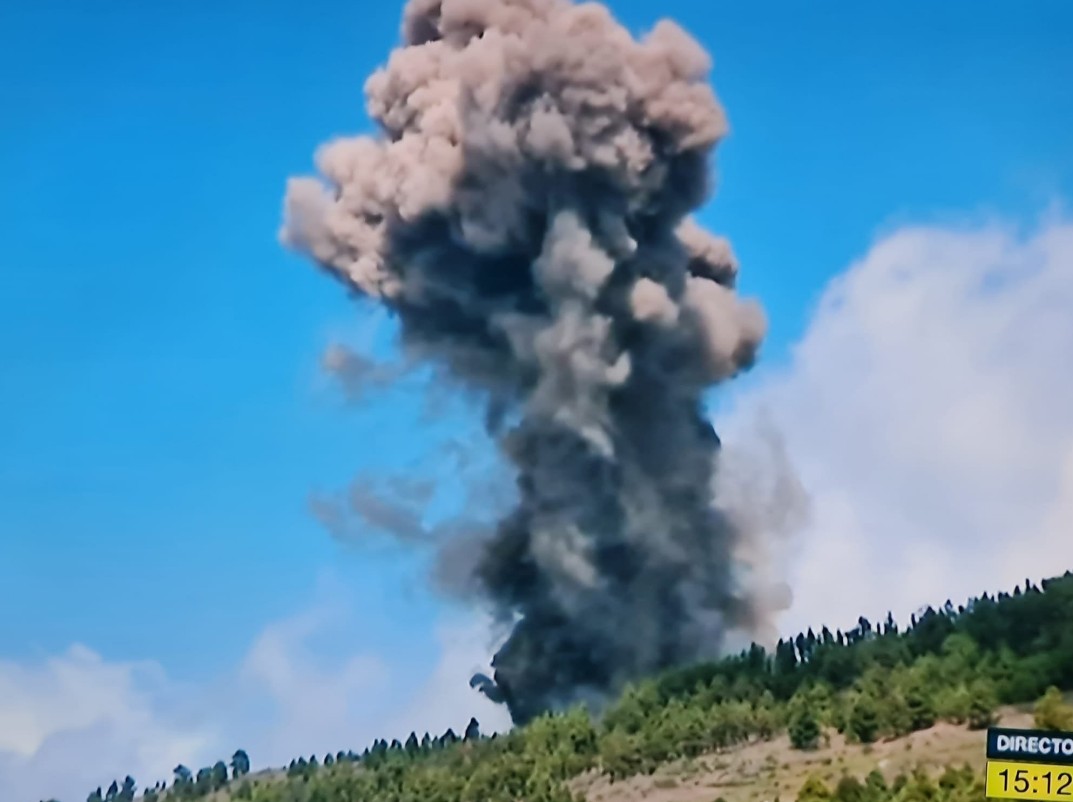 Initial reports mention a fissure opened on the western flank of the volcano, producing small lava fountains and flows, and burning forests and farmland.3

Evacuation of the area where the eruption is taking place is in progress.

Just before the eruption, authorities started evacuating farm animals and people with mobility issues from the area where most earthquakes took place.

THE ERUPTION HAS JUST BEGUN IN LA PALMA. THESE IMAGES HAVE BEEN RECORDED BY INVOLCAN PERSONNEL #LaPalma #volcanology pic.twitter.com/twJwZfbAjw

As the lava flows begun to descend down the slope, the Civil Guard announced that up to 10 000 people will be evacuated from municipalities of El Paso, Los Llanos de Aridane, Fuencaliente, and Tazacorte.

Current projections of the lava flows predict they are likely to run through an area near the settlement of Montaña Rajada, following a ravine.3

The main concerns are that lava might reach inhabited areas such as La Laguna, in Los Llanos de Aridane.

"The problem is further down, in the Los Campitos area. The lava is advancing slowly. People can be evacuated with relative ease," the mayor of El Paso, Sergio Rodríguez, said.

Lava flows have already destroyed several homes in the municipality of El Paso.

It crossed the Tacande highway around 16:30 UTC.

Video made by our colleague María Asensio who is at one of the lava flows of the eruption … goosebumps #LaPalmaeruption pic.twitter.com/XlFIOMQ1bi

"The recent volcanic reactivation in La Palma has once again sparked the debate on the stability of the west flank of the island, raising concerns in society," said Luis González de Vallejo, Director of the Geological Risks at INVOLCAN.4