An unprecedented heatwave is sweeping over Hokkaido, Japan, with numerous all-time records falling almost every day. Very high temperatures are expected to continue over the next 14 days.

One of the most notable records on July 27 was registered in Asahikawa, holder of the coldest temperature in Japanese history.

Unprecedented heat wave in #Hokkaido. Record keep falling by bunch almost every day. Asahikawa, the Japanese holder of the coldest temp. in Japanese history, had its hottest day in history with 36.2C (prev 36.0C in 1989). Below a list of the all time record beaten today (by JMA). pic.twitter.com/w6NYqjRr6R

The Japan Meteorological Agency (JMA) has issued an early warning for very high temperature from August 1 to 9, affecting almost the entire country. 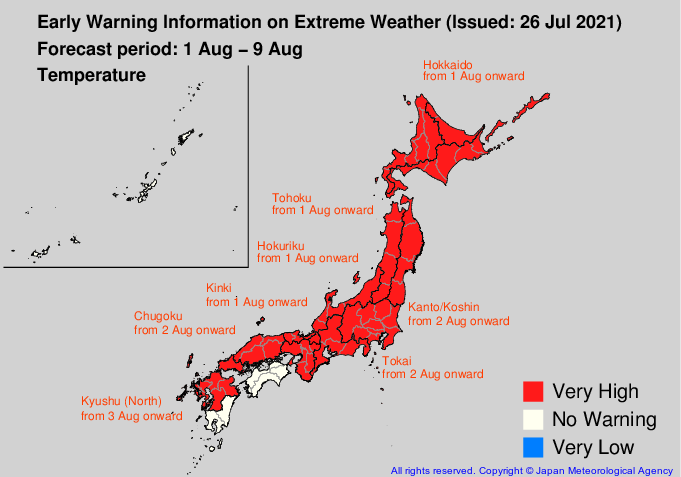 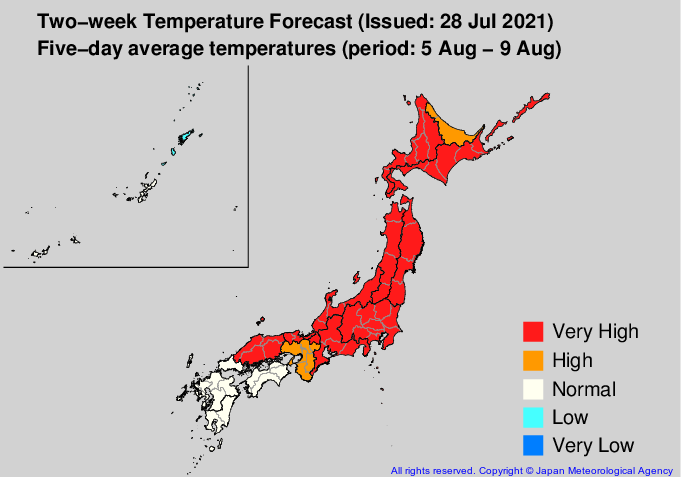 This image shows categorized five-day average temperatures from eight days ahead, with red and blue indicating values expected to be very high and very low, respectively, at probabilities of 30% or more. Orange and light blue indicate values expected to be high and low, respectively. Appearance ratios for high/very high, normal and low/very low temperatures are 33% in the relevant climatology. The terms “very high” and “very low” refer to temperatures with climatology appearance ratios of 10%. Credit: JMA