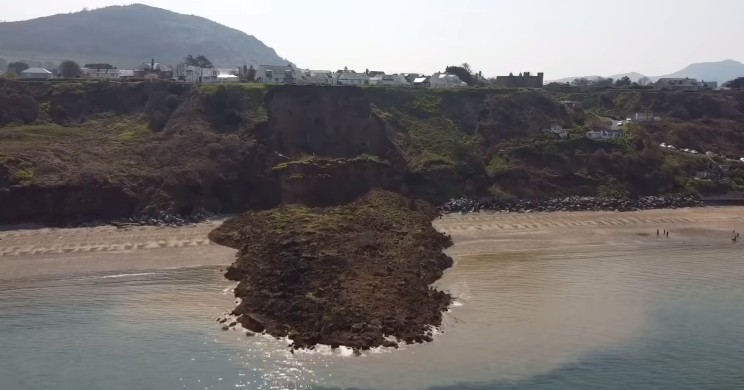 A large coastal landslide took place at Nefyn Bay in north Wales, U.K. on April 19, 2021. The event was captured on camera by Amanda Stubbs who was there when it started.

The landslide happened on Nefyn's coastline in Gwynedd, taking a large part of the garden on the cliff above. It's at least 40 m (131 feet) wide, according to eyewitnesses.

The police secured the area and advised the public to avoid it until further notice.

This area — listed as a 'subsidence hazard zone' — is known for its coastal erosion, with a history of large and deadly landslides, including rotational failures, flows, falls, and debris slides.

Dr. Dave Petley of The Landslide Blog said the landslide is interesting for its timing during an unusually dry period for the time of the year and for its quite long runoff.

"It starts as a small retrogressive slump on the margin of what becomes the main slide. This destabilizes the main mass, which fails through a strongly rotational mechanism. After failure, the mass runs across the beach as a high mobility earthflow," Petley said.

"This landslide has received some attention in the UK, but strangely the most interesting element has not really received much publicity. This is that the landslide was captured on video by a woman, Amanda Stubbs, who was standing at the toe."

Amanda took the video just about 180 meters (200 yards) from her holiday home. "Although I've seen the aftermath of many small landslides I have never witnessed one of this scale first hand," she said.

"It was just frightening," Sue Cookson told the BBC. "There were a few people around and we just made sure there was nobody under the landslip because we thought there could be."

The noise was quite incredible, Cookson said.