A new seismic tremor similar to the one measured on March 3 started on Reykjanes Peninsula at 00:22 UTC on March 7, 2021.

Today's tremor was much shorter than the one on March 3 — it lasted 20 minutes vs. several hours four days ago.

Seismicity increased following the tremor with earthquakes larger than M4.

Civil Protection and IMO experts met with the Police in Suðurnes and a representative of Grindavík at 03:30 UTC.

It is the opinion of experts based on the available data, that the earthquakes that were detected last night and this morning in Grindavík are not due to a displacement of magma and are therefore not considered as a short-term predictor of an eruption. 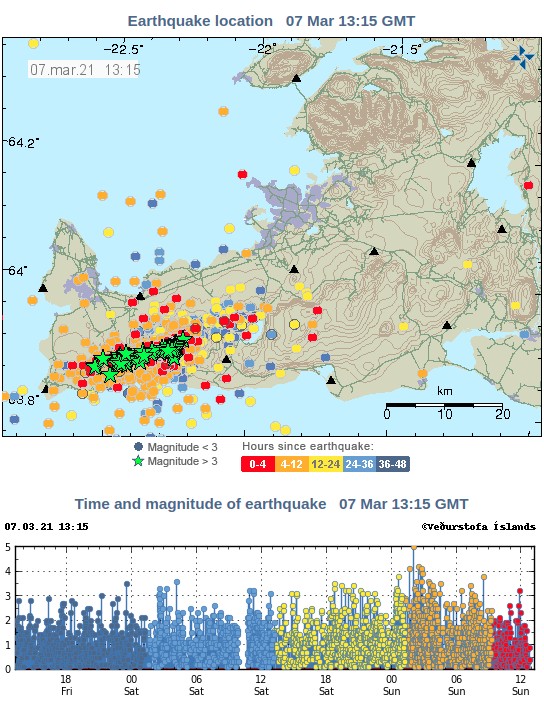 Similar bursts of tremor have been observed ahead of previous volcanic eruptions in Iceland.

Magma movements are a likely cause for the ongoing signal, and it is possible that an effusive (lava-producing) eruption could occur close to Keilir, IMO said on March 3.

As a precaution for domestic and international air travel, the volcanic Aviation Color Code for the Reykjanes Peninsula has been elevated from Yellow (elevated unrest) to Orange (heightened unrest) on March 3.

Orange alert represents the third-highest level, with red reserved for an imminent or ongoing volcanic eruption.

It is difficult to predict the exact development and whether one scenario is more likely than another, IMO said.

Since February 24 when an intense earthquake swarm started on the peninsula, IMO has detected more than 22 000 earthquakes in the area.​