Highways and roads in Western Australia were destroyed in what was described as a "one-in-10-year" flooding event triggered by a slow-moving tropical low from Friday, February 5, 2021. As of Monday, February 8, a severe weather warning for heavy rainfall is in place over the East Kimberley as the low has moved offshore to the south of the state.

The tropical low dumped up to 176 mm (6.9 inches) of rain in Carnarvon in a 24-hour period on February 5. The WA Department of Fire and Emergency Services (DFES) issued flood warnings for Midwest-Gascoyne, particularly for areas of Geraldton, Mullewa, Kalbarri, Northampton, Overlander Roadhouse, and Wooramel Roadhouse.

Dozens of people were rescued from flooding in the Gascoyne region, including some by helicopter. DFES said there were 50 calls for assistance in the Carnarvon area, and some evacuations were conducted at the site. Many highways and roads were damaged or destroyed, which will take weeks to repair.

Thinking of my lovely Carnarvon peeps currently sloshing out yonder. Pic of the Gascoyne River in flood today and me standing on its dry riverbed in September. Levels are currently 7.1m high… pic.twitter.com/eKfQmiZ7Z2

It'll take weeks to repair flood damage near Carnarvon, as farmers, truckies and travellers remain cut off from the rest of the state. | @_nathanbrooks_ pic.twitter.com/86dblmG59n

Just saw the news on tiktok about the Carnarvon floods over in WA flooding and destroying sections of the highway. Yikes. pic.twitter.com/fzzoR0WSGe

"Motorists are reminded to obey all road closures and take care when traveling through the area," DFES stated. "Keep away from flooded drains, rivers, streams, and waterways."

"The advice is that this is a one-in-10-year flood," noted WA Premier Mark McGowan. "Road building crews are ready to deploy as soon as flood levels recede sufficiently to make an on-the-ground assessment of the damage."

As of Monday, a severe weather warning for heavy rainfall has been issued over the East Kimberley, as the low has moved offshore to the south of the state, with rainy conditions starting to ease in the southwest. 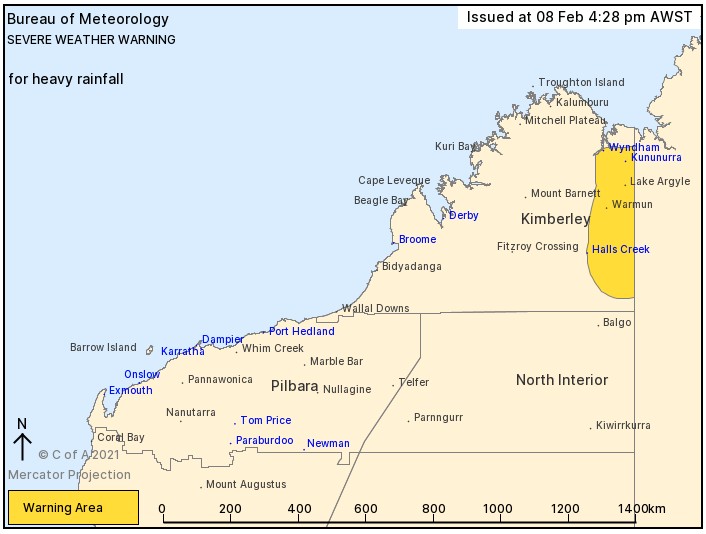 A tropical low currently located over central parts of the Northern Territory is expected to move west overnight Monday and into the eastern Kimberley during Tuesday, BOM said.

As the low moves west, heavy rainfall which may lead to flash flooding will begin to develop around the Lake Argyle and Warmun area overnight Monday. The heavy rainfall is expected to gradually extend west throughout the warning area during Tuesday.

Flood Watches are current for river catchments across the east Kimberley. 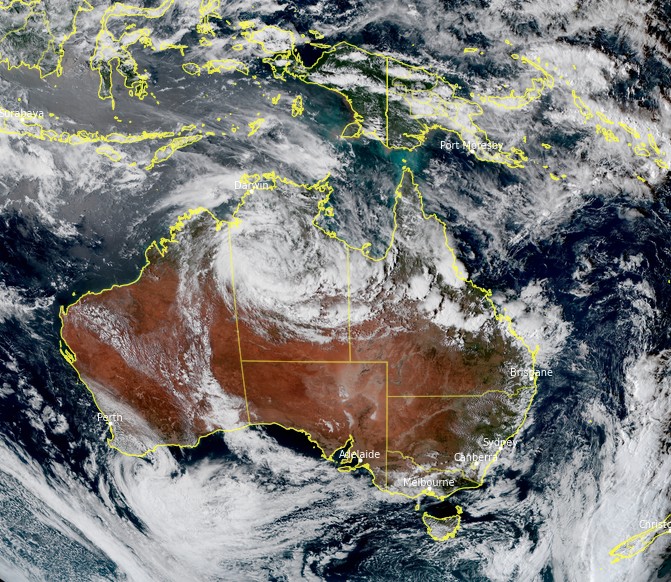 Locations which may be affected include Halls Creek, Kununurra, Wyndham, Lake Argyle and Warmun.

People in the Kimberley may experience this type of weather each year at this time but rain may cause damage to property and make road conditions hazardous.