Seismic activity increased around Grindavík at the end of May 2020. Since then almost 2 500 earthquakes were registered, most of them below M1.0. The activity in the region has increased episodically since January this year due to deformation caused by magmatic intrusion at a depth of several kilometers just west of Mt. Trhorbjorn (Þorbjörn), the Icelandic Met Office (IMO) reports.

In mid-May 2020, deformation data (GPS and InSAR measurements) started to show new signs of inflation, suggesting that a third intrusion since the beginning of this year is occurring west of Thorbjorn, IMO reported on June 16, several days after the meeting of Scientific Advisory Board to review the on-going volcanic unrest at Reykjanes and to discuss the latest measurements done at Grímsvötn volcano.

The intrusion west of Mt. Thorbjorn began around mid-May but the seismic activity started to increase on May 30.

Almost 2 500 earthquakes have been detected through June 16, with several events located east of Thorbjorn, few kilometers north of the town of Grindavik. The largest earthquake of this swarm occurred on Saturday, June 13 with a magnitude of 3.5.

Since the beginning of the volcanic unrest in January, the total uplift measured in the area is around 12 cm (4.7 inches).

"Between the inflation periods, slight deflation has been observed, probably reflecting the cooling of the intruded magma or the interaction with the geothermal system. Numerical modeling results show that this third intrusion is occurring roughly in the same area as the previous ones, at about 1 km (0.6 miles) west of Thorbjorn, at a depth of 3 – 4 km (1.8 – 2.5 miles), with a width of few hundreds of meters and oriented NE-SW for about 6 km (3.7 miles)," IMO noted.

"The seismic activity is occurring over an area larger than the extension of the intrusion itself and this is probably due to the stress change induced to the crust which affects a wider sector of the peninsula."

Iceland Geosurvey performed micro-gravity measurements along some profiles in late January when the intrusion started and repeated the measurements in late April. The results confirm the presence of intruded magma at depth.

The measurements will be repeated in mid-summer.

Weekly gas measurements at two sites near the area of the intrusion change occasionally over time but the interpretation is still unclear.

No chemical changes have been detected at the geothermal power plant in Svartsengi. However, measurements of the geothermal system reveal an increased permeability and increased fluid flow in the surrounding rock, which can be linked to the earthquake activity, inflation, and uplift in the area, which triggered the creation of new cracks and opening of older ones.

Processing of seismic data at the IMO suggests that permanent changes have occurred in the crust nearby Grindavík since the new year. 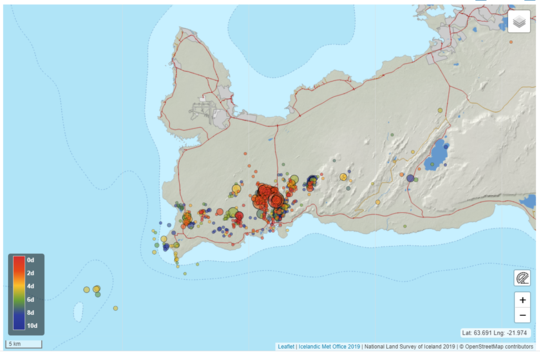 Participants of the meeting also discussed recent gas and deformation measurements at Grímsvötn volcano — which indicate there is magma at shallow depth beneath the volcano and that there is a possibility the volcano might erupt in the next weeks or months.

You can read more about it in the following report: