In an analysis of the landslide database for 2019 by Dr. Dave Petley, Pro-Vice-Chancellor at the University of Sheffield– it was shown that 463 non-seismic fatal landslides occurred last year, causing 3 270 deaths. Given the number of deadly landslides, 2019 is the third-worst in the dataset.

The dataset is comprised of information Petley has been collecting since September 2002. It was the basis of a couple of his research publications as well, including many posts he contributed to the American Geophysical Union's (AGU) Earth and space science blog.

Petley revealed the final statistics, showing that 463 non-seismic fatal landslides and 3 270 casualties were recorded in 2019. "In addition, I recorded 14 landslides triggered by earthquakes, with 27 fatalities, but this is undoubtedly a significant underestimate in both respects," he said.

In this graph, the cumulative total number of fatal landslides through 2019 is indicated. 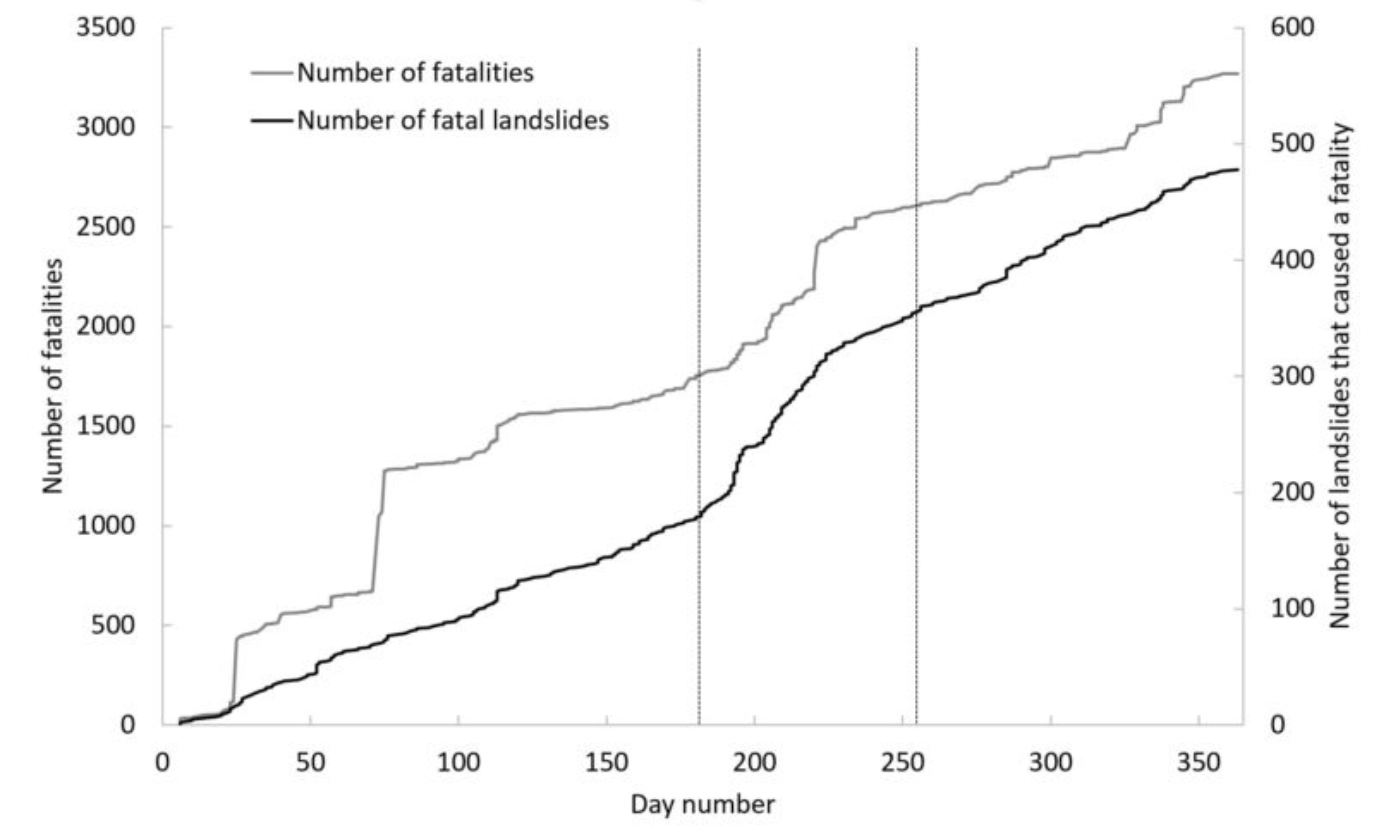 "I have delineated the most intense period of the summer monsoon in Asia with the vertical black lines– during this time the number of landslides increases dramatically," Petley wrote.

It was also noted that the fatality data is noisier, as usual, and is dominated by a correspondingly small number of huge events, including the Brumadinho tailings dam failure in Brazil.

In a separate update on landslides from the 2019 Northern Hemisphere monsoon season, Petley stated that the Asian monsoon remains the ruling factor in identifying the overall number of landslides in a particular year.

Landslides outside the summer monsoon season happen at a steady but rising rate, he remarked.

In the first analysis, the higher figures in 2019 were possibly the aftermath of the following: landslides induced by higher than usual incidence of monsoon; the continuous increase in landslips due to mining, and a much higher than normal incidents of deadly mudslides in Africa.

Petley remarked that he will further conduct examinations to verify these hypotheses.

Landslides are a ubiquitous hazard in terrestrial environments with slopes, incurring human fatalities in urban settlements, along transport corridors and at sites of rural industry. Assessment of landslide risk requires high-quality landslide databases. Recently, global landslide databases have shown the extent to which landslides impact on society and identified areas most at risk. Previous global analysis has focused on rainfall-triggered landslides over short ∼ 5-year observation periods. This paper presents spatiotemporal analysis of a global dataset of fatal non-seismic landslides, covering the period from January 2004 to December 2016. The data show that in total 55 997 people were killed in 4862 distinct landslide events. The spatial distribution of landslides is heterogeneous, with Asia representing the dominant geographical area. There are high levels of interannual variation in the occurrence of landslides. Although more active years coincide with recognized patterns of regional rainfall driven by climate anomalies, climate modes (such as El Niño–Southern Oscillation) cannot yet be related to landsliding, requiring a landslide dataset of 30+ years. Our analysis demonstrates that landslide occurrence triggered by human activity is increasing, in particular in relation to construction, illegal mining, and hill cutting. This supports notions that human disturbance may be more detrimental to future landslide incidence than climate.