Two powerful storm systems will move through the Lower 48 states this week, the National Weather Service (NWS) warns. A Central U.S. storm will bring heavy snow from the Rockies to the Upper Midwest on Tuesday and Wednesday, November 26 and 27, 2019. Strong to potentially damaging winds are forecast south of the storm track from Texas into the Great Lakes. The second storm will arrive Tuesday into the West Coast with strong winds, dangerous seas and heavy mountain snow.

The first system will be an amplifying upper-level trough over the Rockies and northern Plains that will support an intensifying surface low across the central Plains and then the Midwest by Tuesday night.

Upslope flow and cold temperatures north of the low will support a broad swath of moderate to heavy snowfall, extending from the Colorado and Wyoming Rockies to the Upper Peninsula of Michigan where winter storm warnings are currently in effect.

Given the tight pressure gradient with this low pressure system, very windy conditions are likely across much of the Plains, and high wind warnings are in effect from eastern New Mexico to southern Kansas, where winds could gust in excess of 88 km/h (55 mph) at times.

High wind watches are in effect for portions of the Midwest and Ohio Valley as the storm approaches that region by Wednesday. 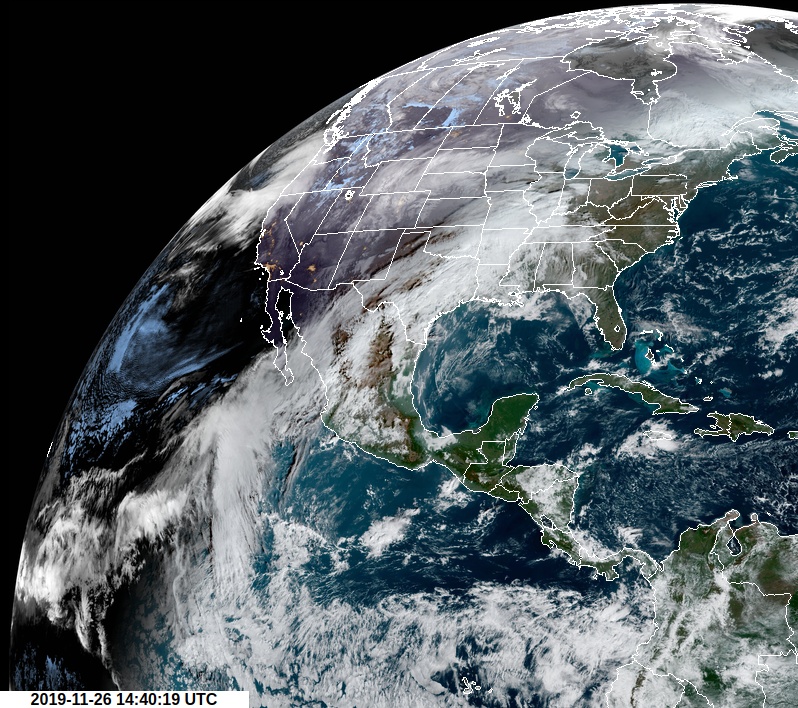 An even stronger storm is expected to develop over the eastern Pacific and reach the West Coast by Tuesday night.

This low pressure system will likely undergo bombogenesis (pressure drop of at least 24 hPa in 24 hours) by late Tuesday afternoon, at which point it will likely become a sub-980 hPa low with hurricane-force winds over the offshore waters!

It should reach land near the California/Oregon border early Tuesday night, with the potential for November low pressure records, and then begin to gradually weaken as it moves inland.

The mountains of southern Oregon and northern California are likely to get hammered with blizzard conditions and battering surf and high winds for coastal areas.

Winter storm watches and warnings are already in effect for many of these areas, and the cold nature of the event will result in lower than usual snow levels.

Snowfall accumulations on the order of 30 – 90 cm (1 to 3 feet) appears likely for many of the California mountain ranges, and winter storm watches are in effect farther to the east to include northern Arizona.

Thanksgiving travel in these regions could be severely affected, and local forecast offices have additional information pertaining to this. Elsewhere across the nation, showers and thunderstorms are forecast to develop from the central Gulf Coast to the Ohio Valley in the warm sector of the developing storm system over the Plains, with rainfall amounts approaching one inch in some locations.

Some severe storms will also be possible with a Slight Risk from the Storm Prediction Center on Tuesday. In contrast, the weather should remain relatively uneventful along most of the East Coast through midweek.