At a press conference held after deadly M6.5 earthquake hit Luzon on April 22, 2019, seismologists said their computer models show that more than 40 000 Metro Manila residents could die if M6.5+ earthquake hits the city, reminding residents the region is sitting on strike-slip fault system, prone to large earthquakes, and to be ready and prepared. They are suggesting a massive structural audit of homes and buildings.

Speaking  at a press conference in Quezon City, Ishmael Narag, Officer-in-Charge of Phivolcs Seismological Observation and Earthquake Prediction Division, said: "The Valley Fault scenario would extend the level of damage and casualties beyond Metro Manila and [through] the software that we are currently using, we were able to evaluate as well the impact in the surrounding provinces. In fact, the casualty count is more than 40 000."

The Marikina Valley Fault System, also known as the Valley Fault System (VFS), is a dominantly dextral strike-slip fault system in Luzon, Philippines. It extends from Doña Remedios Trinidad, Bulacan in the north and runs through the provinces of Rizal, and the Metro Manila cities of Quezon, Marikina, Pasig, Makati, Taguig and Muntinlupa, and the provinces of Cavite and Laguna that ends in Canlubang. 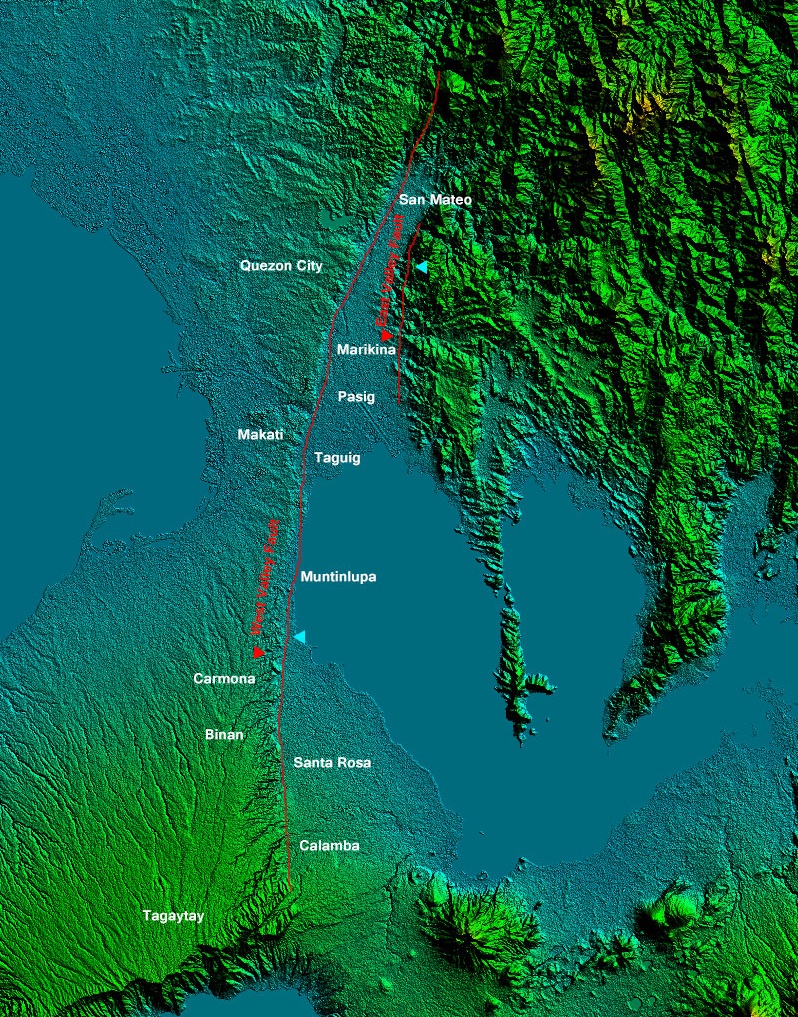 Relief Map of Metro Manila and nearby provinces showing the surface traces of the West and East Valley Faults. Credit: Ervin Malicdem

WVF is one of the two major fault segments of the Valley Fault System which runs through Metro Manila to the cities of Marikina, Quezon City, Pasig, Makati, Taguig and Muntinlupa. It traverses from Doña Remedios Trinidad to Calamba with a length of 129 km (80.45 miles) and is capable of producing large scale earthquakes on its active phases with a magnitude of 7 or higher.

Narag added that Phivolcs was seeking to put more measuring devices around the Valley Fault to pick up even minor events.

"We need to locate the movements properly so we can study the trend of movements along the fault," he said.

The press conference was held in the wake of a magnitude 6.1 and magnitude 6.5 earthquakes that struck Zambales in Central Luzon and Samar in the Eastern Visayas on April 22 and 23, 2019.

LOOK: The damaged church of St. Catherine of Alexandria Parish in Porac, Pampanga on April 23, 2019, after a 6.1 magnitude earthquake struck some parts of Luzon including Metro Manila. #QuakePH
Photo by Lisa Marie David/Rappler pic.twitter.com/cIBezA3139

The Philippine Institute of Volcanology and Seismology (PHIVOLCS) explained that they are not putting fear to people but for them to prepare in the worst things that can happen. They also reminded them to stay calm but to be ready at all times.

Some experts are suggesting a massive audit of homes, buildings and other structures across Metro Manila. The audit should focus on units built before 1992.

"This must be done immediately, before the 'Big One' strikes," PHIVOLCS director Renato Solidum said.

"More than a third of all residential homes and 10 – 30 story buildings are now at risk," he said.

The Big One could produce an intensity 8 shaking that would make even standing up difficult in Metro Manila, Bulacan, western parts of Rizal, and northern parts of Laguna and Cavite, Solidum added.