Storm Ali is approaching Ireland, Northern Ireland and northern Britain today forcing authorities to issue wind warnings across the region. This is the first officially named storm by the UK Met Office and Met Éireann for the 2018/19 season.

Ali will track close to the west and northwest coast of Ireland from the early hours of Wednesday morning until late afternoon, September 19. South to southwest winds veering westerly will increase to mean speeds between 65 and 80 km/h (40 – 50 mph) with gusts between 110 and 120 km/h (68 –  75 mph) for a time in some areas. Winds will be strongest along Atlantic coasts at first and later in the morning extend further east. 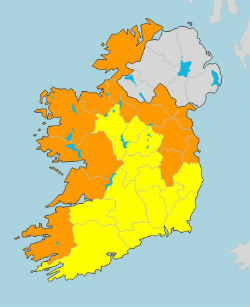 Status Yellow – Wind warning is in effect for Ireland, valid 05:00 local time, Wednesday, September 19, 2018 to 17:00 local time of the same day. The office expects very windy weather across Ireland from early on Wednesday morning until evening. South to southwest winds will reach mean speeds of 50 to 65 km/h (31 – 40 mph) with gusts of 90 to 110 km/h (56 – 68 mph), strongest in southern, western and northern coastal areas.

Status Yellow – Small Craft Warning: South to southwest winds will reach force 6 or 7 on all coasts this afternoon.

An Amber National Severe Weather Warning is in place: warning of gusts of 104 – 120 km/h (65 – 75 mph) across the warning area. Gusts up to around 130 km/h (80 mph) could also be possible in exposed locations, such as coastal regions and high ground.

Ali is strong enough to send flying debris that could lead to Injuries or danger to life, inflict some damage to buildings, such as tiles blown from roofs or damage through falling trees and branches breaking, and cause longer journey times and cancellations as road, rail, air and ferry services may be affected.

Power cuts may occur, with the potential to affect other services, such as mobile phone coverage. Some roads and bridges are likely to close while large waves could affect coastal roads, seafronts and properties.

"As this is the first spell of very strong winds of the season, and given that most trees are still in full leaf, we are likely to see some dangerous conditions with falling trees and flying branches and other debris likely. Strong winds will be accompanied by heavy, squally showers," Chief forecaster Laura Paterson said.

The Scottish Environment Protection Agency’s Hydrology urged the public to remain vigilant, especially in areas susceptible to flooding and sign up to Floodline on 0345 988 1188 for the most up to date alerts.

The winds will gradually ease later on Wednesday, firstly across Northern Ireland, northwest Wales and northern England, and then across Scotland.

The outlook for the remainder of the week is rather unsettled with further strong winds and heavy rain expected across most parts of the UK. A Yellow rain warning has been issued for parts of Wales and northwest England on Thursday.

Another spell of wet and windy weather is possible over the weekend too.