Asteroid 3122 Florence (1981 ET3), one of the largest known, flew past Earth at a distance of 18.38 LD (~7 million km / 4.4 million miles / 0.047 AU) at 12:06 UTC on September 1, 2017. This is the largest asteroid to pass this close to our planet since the first near-Earth asteroid was discovered over a century ago. Its flyby was an excellent opportunity to make detailed measurements of a large near-Earth asteroid.

Radar images of asteroid 3122 Florence obtained at the 70-meter antenna at NASA’s Goldstone Deep Space Communications Complex between August 29 and September 1 have revealed that the asteroid has two small moons, and also confirmed that main asteroid Florence is about 4.5 km (2.8 miles) in size. 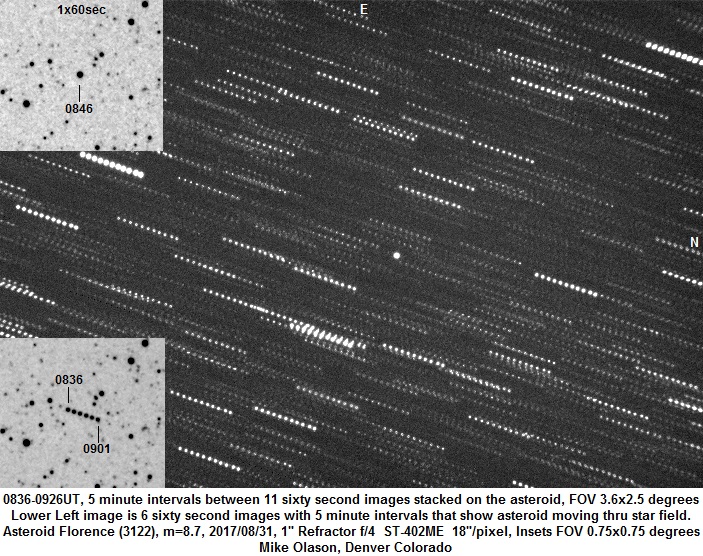 The times required for each moon to revolve around Florence are also not yet known precisely but appear to be roughly 8 hours for the inner moon and 22 to 27 hours for the outer moon. The inner moon of the Florence system has the shortest orbital period of any of the moons of the 60 near-Earth asteroids known to have moons. In the Goldstone radar images, which have a resolution of 75 meters, the moons are only a few pixels in extent and do not reveal any detail.

Animated sequence of radar images of asteroid Florence obtained on Sep. 1, 2017 using the 70-m antenna at the Goldstone Deep Space Communications complex. The resolution of these images is about 75 meters. The images show two moons orbiting the much larger central body, which is about 4.5 km in diameter. The inner moon briefly disappears as it moves behind the central body and is hidden from the radar. Credit: NASA/JPL

The radar images also provide our first close-up view of Florence itself. Although the asteroid is fairly round, it has a ridge along its equator, at least one large crater, two large flat regions, and numerous other small-scale topographic features. The images also confirm that Florence rotates once every 2.4 hours, a result that was determined previously from optical measurements of the asteroid’s brightness variations.

The animated sequence below is built from a series of radar images of Florence. It lasts several hours and shows more than two full rotations of the large, primary body.

The moons can be clearly seen as they orbit the main body. Radar images are different from pictures taken with a digital camera but are similar to ultrasound images. The geometry in radar images is analogous to seeing an object from above its north pole with the illumination coming from the top. Projection effects can make the positions of Florence and its moons appear to overlap even though they are not touching.

Florence reached its closest approach to Earth early on September 1 and is now slowly receding from our planet.

Asteroid 3122 Florence tracked by The Virtual Telescope Project on September 1, 2017

Additional radar observations were performed at NASA’s Goldstone Solar System Radar in California and at the National Science Foundation’s Arecibo Observatory in Puerto Rico through September 8.

These observations should show more surface detail on Florence and provide more precise estimates of the orbital periods of the two moons. The results are valuable to scientists because they can be used to estimate the total mass and density of the asteroid.