In a special bulletin released March 20, 2017, Ecuador's Institute of Geophysics reports a significant increase in activity under Cerro Azul volcano which might be a precursor to a new eruptive episode. Since 1932, there were 11 reported eruptions of the Cerro Azul volcano. The last one took place in 2008. Cerro Azul is located on the southwestern end of the Isabela Island in the Ecuadorian province of Galápagos, some 1 000 km (620 miles) off the coast of South America.

As of February 15, 2017, the institute reports, there was an increase in seismicity, characterized by the presence of rock fracture (VT) events. On February 16, the seismic network detected a swarm of earthquakes lasting approximately 1 hour and then the activity decreased. Sporadic earthquakes continued until March 18 when a new 30-minute swarm took place under Cerro Azul. Some of these events were located in the Sierra Negra volcano.

On March 19, the earthquakes became more frequent and of greater magnitude. They were located in the southern part of the Cerro Azul volcano, unlike in previous days.

"From what is revealed, there is a migration of activity from the Sierra Negra volcano to Cerro Azul," IG said. 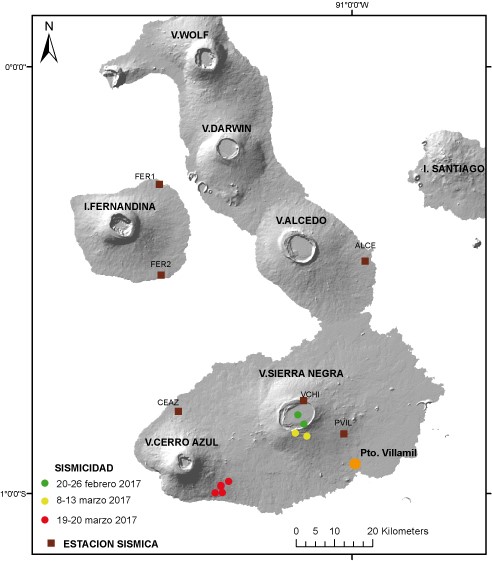 From what has been observed in recent months, an eruption of Cerro Azul of the same type as in 2008 is likely.

There are no human settlements in the vicinity of the volcano that could be affected by lava flows. However, in the case of explosive activity, small ash falls could occur in Puerto Villamil. This will depend on the direction and speed of the wind.

Additionally, the increase in seismic activity recorded since March 19 may not necessarily be an eruptive precursor if it is being generated by a small intrusion.

The Cerro Azul eruption in 2008

The last known eruption of this volcano started on May 29, 2008 after an increase in seismic activity. The eruptive episode lasted until June 11 with two distinguished eruptive phases.

The first phase, which occurred between May 29 and June 1, consisted of a rapid emission of lava flows from the top of the cone along concentric and radial fractures. This activity generated a low ash eruptive column that drifted to the NW. Some lava flows emitted from the summit entered the caldera of the volcano. During this phase, the highest magnitude earthquake (3.7, May 30) was located in the northern part of the volcano with a SO2 emission of 10 597 kt. The largest SO2 emission was observed by the IMO instrument on May 31 with 21 820 kt.

In contrast, during the second eruptive phase the lava flows were emitted from a radial fissure in the lower part of the building. These flows descended up to 10 km (6.2 miles) along the SE and E flanks of the volcano with an average width of 2 – 3 km (1.2 – 1.8 miles). Eruptive activity declined sharply between June 16 and 17. 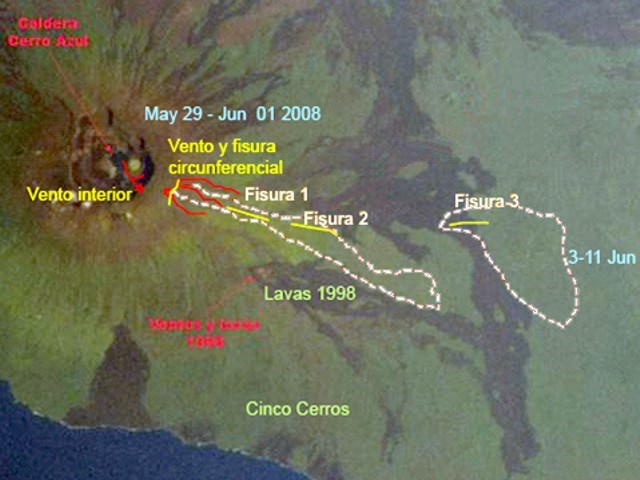 Lava flows emitted during the eruption of Cerro Azul volcano in 2008. Credit: IG

Located at the SW tip of the J-shaped Isabela Island, Cerro Azul contains a steep-walled 4 x 5 km nested summit caldera complex that is one of the smallest diameter, but at 650 m one of the deepest in the Galápagos Islands. The 1640-m-high shield volcano is the second highest of the archipelago. A conspicuous bench occupies the SW and west sides of the caldera, which formed during several episodes of collapse. Youthful lava flows cover much of the caldera floor, which has also contained ephemeral lakes. A prominent tuff cone located at the ENE side of the caldera is evidence of episodic hydrovolcanism.

Numerous spatter cones dot the western flanks. Fresh-looking lava flows, many erupted from circumferential fissures, descend the NE and NW flanks. Historical eruptions date back only to 1932, but Cerro Azul has been one of the most active Galápagos volcanoes since that time. Solfataric activity continues within the caldera. (GVP)