A significant winter storm, named Doris by the UK Met Office, is expected to bring damaging winds, rain and some snow to the UK on Thursday, February 23, 2017.

An Amber National Severe Weather Warning has been issued for wind with gusts expected to reach 96 – 112 km/h (60 – 70 mph) in central England and Wales with gusts on coasts and hills of around 129 km/h (80 mph). Elsewhere across the UK it will still be windy, with widespread gusts of 80 – 96 km/h (50-60 mph) expected in the north and south of England and southern Wales, a Yellow weather warning is in place for these regions.

As well as heavy rain in central parts of the UK, it is likely there will be snow on high ground in the far north of England and for much of Scotland which could fall to low levels in some of these areas. An Amber weather warning for snow has been issued for the south of Scotland including the Edinburgh area where there may be more than 20 cm (7.9 inches) in places.

A Yellow weather warning for snow has been issued for a wider area taking in the very north of England and large parts of Scotland. Additionally, a Yellow warning for rain has been issued for Northern Ireland, southern Scotland and parts of northwest England over Wednesday night and into Thursday when rainfall totals could reach 20 – 30 mm (0.8 – 1.18 inches). 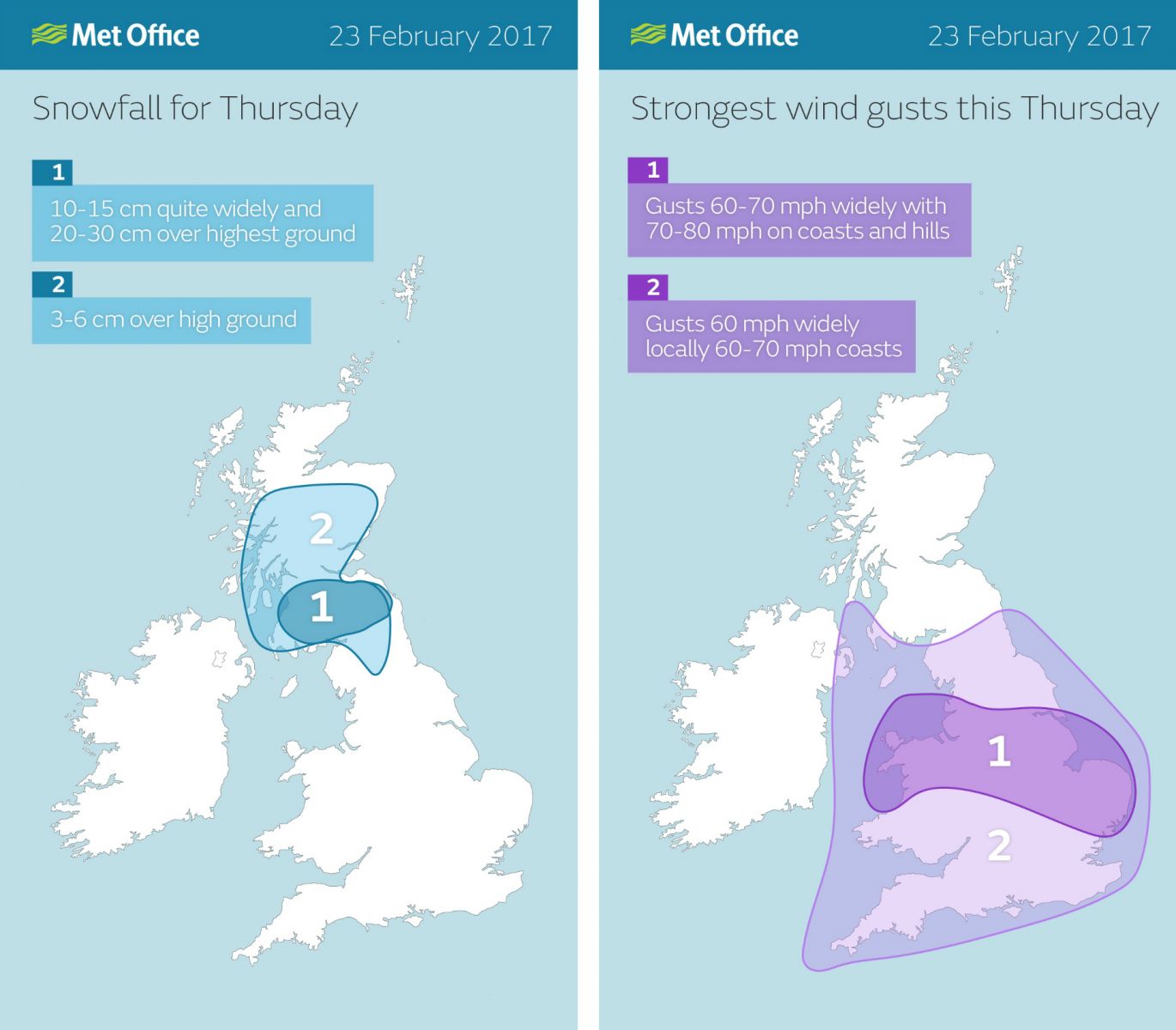 “Storm Doris will bring damaging winds with some significant disruption likely to central parts of the UK on Thursday, whilst southern Scotland will see some heavy snowfall. People in the warning areas should be prepared for a disruptive stormy weather, wind speeds in some locations could reach up to 80 mph so make sure you keep up to date with your local forecast and any weather warnings for your area," Chief Meteorologist Eddy Carroll said.

“Friday will bring a welcome break from the unsettled conditions with some bright spells for many and much calmer winds after a cold start with a risk of icy patches. Saturday, however, will bring further wet and windy weather to the northwest of the UK where the rain could be heavy and persistent.”

“Transport Scotland is working with the relevant organizations, such as Police Scotland and the road operating companies, to try to mitigate the effects of this latest set of wintry conditions but we would ask road users to be mindful that disruption is likely and to plan accordingly," Transport Minister, Humza Yousaf said.

“We have more gritters available across the trunk roads this year than ever before and these will be out with patrols across the night and into tomorrow morning and beyond. There is plenty of salt available for treating the roads and the winter control rooms are monitoring conditions 24/7.

“The advice is the same for those intending to use public transport. Passengers should check their travel operator’s website before they leave and be mindful that conditions could be difficult in some areas.”

Motorists are advised to take extra care as Storm Doris impacts the UK on Thursday. Be prepared to reduce your speed, allow plenty of room between your car and the vehicle in front and be wary of aquaplaning where water accumulates on the road.

"Be mindful that there will be strong gusts of wind, so ensure you have a good grip of the steering wheel and take extra care when overtaking high-sided vehicles and passing motorcyclists and cyclists who are susceptible to be buffeted and blown off course the wind. In extreme conditions, it may be worth delaying your journey if possible until storm conditions pass, but it looks as though Storm Doris's impact will be relatively brief," Transport Minister, Humza Yousaf said.

On Friday, after a chilly start with a risk of icy patches, most of the UK will see much drier, calmer conditions. By Saturday however, more wet and windy weather will return for the northwest with the south staying drier.