A series of steam and ash eruptions occurred at the active crater of Kanlaon volcano in the central Philippines starting at 01:19 UTC on June 18, 2016. Based on visual observations, the eruption lasted for around 27 minutes. 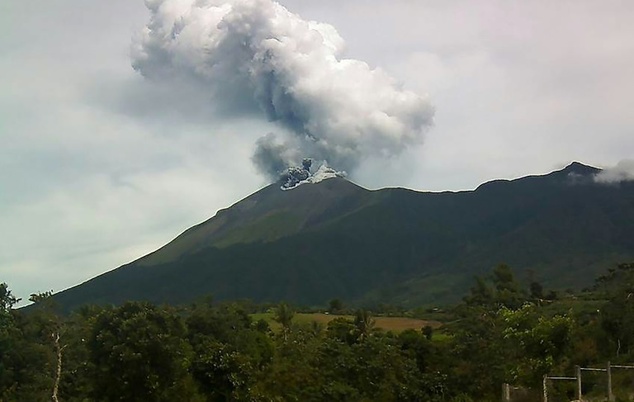 The civil defense office said they had not received any reports of damage or people affected from the ashfall but that authorities remain on alert.

PHIVOLCS maintains Alert Level 1 status over the volcano, which means that it is at an abnormal condition and is in a period of current unrest.

The local government units and the public are reminded that entry into the 4-kilometer (2.5 miles) radius Permanent Danger Zone (PDZ) is strictly prohibited due to the further possibilities of sudden and hazardous steam-driven or phreatic eruptions.

The official aviation warned aircraft to stay away.

In August 1996, the volcano abruptly erupted, sending a spray of heated rocks that killed three hikers who were near the summit at the time.

Kanlaon volcano (also spelled Canlaon), the most active of the central Philippines, forms the highest point on the island of Negros. The massive 2435-m-high andesitic stratovolcano is dotted with fissure-controlled pyroclastic cones and craters, many of which are filled by lakes. The largest debris avalanche known in the Philippines traveled 33 km to the SW from Kanlaon.

The summit of Kanlaon contains a 2-km-wide, elongated northern caldera with a crater lake and a smaller, but higher, historically active vent, Lugud crater, to the south. Historical eruptions from Kanlaon, recorded since 1866, have typically consisted of phreatic explosions of small-to-moderate size that produce minor ashfalls near the volcano. (GVP)